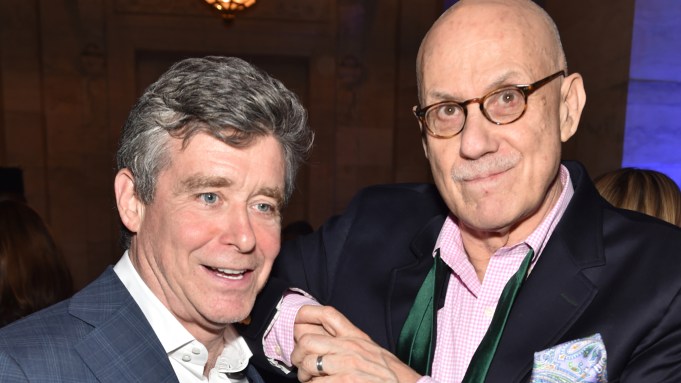 NEW YORK — It was like a replay of the “Cowboy Mouth” writing sessions — 40-odd years on. Among the earliest arrivals at Alfred A. Knopf’s 100th anniversary party on Thursday night at Astor Hall in the main branch of The New York Public Library were old friends Patti Smith and Sam Shepard, who wrote and appeared in the 1971 play together. Asked about the future of the printed word, Smith, who won the National Book Award for her 2010 memoir “Just Kids,” and has a new one, “M Train,” due out from Knopf on Tuesday, said, “Writers write. We’re not giving up. If we have to print it ourselves we will, like Virginia and Leonard Woolf [who founded the Hogarth Press].”

Sonny Mehta, editor in chief of the house, said, “In the future, print will still be a big chunk of our business, and very important in our industry.”

Cartoonist and writer Marisa Acocella Marchetto had a different take, saying, “In the future, people will write novels in hashtags, and there’ll be awards for the best collection of hashtags.”

Inside the library, which was packed with people, was a large Knopf logo with its famous borzoi. Outside, the symbol came to life with six of the beautiful dogs, two in each of the library’s three doors, held by handlers. The canines, which were show dogs, were all very well-behaved, and considerably more decorous than Ellroy, who enlivened the evening with a staccato speech capped off by leading the crowd in what he called “the howl of the borzoi.”

Caro saluted the editors, living and dead, he has worked with during his decades as a Knopf writer. Kaplan, for his part, recalled receiving the manuscript of a new book with a note from Mehta saying, “I think it is very good.”  It was Ondaatje’s award-winning “The English Patient.”