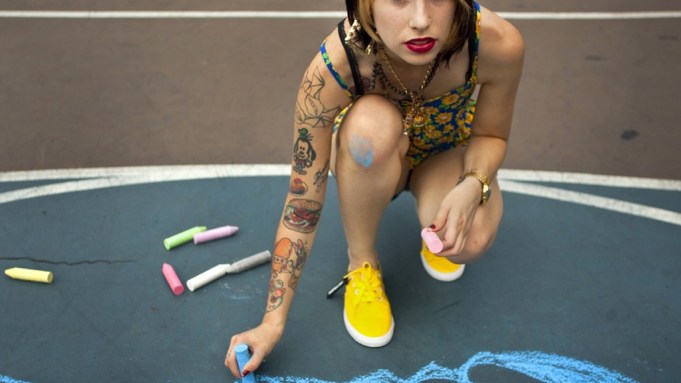 A couple of weeks ago, Kreayshawn was in Rockefeller Center for an appearance on morning radio. It was the first day of a punishing heat wave in New York and the petite 5-foot, 1-inch rapper wore oversize black sunglasses, a thick layer of dark red lipstick and gilded dangling faux bamboo square earrings.

“We coolin’ in here, we chillin’,” she said, explaining to the hosts her choice to keep her glasses on indoors.

A film school dropout who has lived in Oakland, Calif., for half her life, Kreayshawn launched her rap career in earnest on a Monday in May with a music video on YouTube. The song “Gucci Gucci” — an infectious swipe at unoriginal girls in fancy clothes: “Gucci Gucci, Louis Louis, Fendi Fendi, Prada” — caught fire. Filmed on and around Fairfax Avenue in Los Angeles, the amateur though impressively polished video presents a fantasy of the artsy West Coast twentysomething life. Boys on skateboards pass blunts around; tattooed girls in improbably glam thrift-store outfits wave their cell phones and boxes of cigarettes around on the street. It was a hit.

“There hasn’t been anything like this that happened ever because of the simple fact of the way it started on the Internet and legitimately got to a record deal,” says Chioke “Stretch” McCoy, her manager and a veteran of several other Bay Area rap careers. “And on top of that all this happened in no time.”

While hyperbole is McCoy’s job, the speed of Kreayshawn’s ascent has been astonishing. She came to New York last month to perform for executives at her new label and to make nice with the press. But she has found herself in the difficult position of trying to ride her rap success to fame as quickly as possible while killing the idea that she’s just a rapper.

“People be like, ‘oh, that’s that white rapper,’” she said on the radio that morning, when one of the hosts asked her how she classifies her music. “I don’t like the sound of that. That sounds hella whack to me — white girl rapper. I’m an artist.”

The cognitive dissonance might be worthwhile. Being a white, female rapper hasn’t yet worked well for anyone. One pop-music critic at The New Yorker offered to buy his readers Junior Mints if they could spell Kreayshawn (pronounced CRAY-shawn) come December.

“Most of the haters are just miseducated,” she says after her radio appointment. She is at a cafe on Rivington Street waiting for her lunch — a grilled cheese and fried chicken sandwich that she’s splitting with McCoy — to arrive. “At the same time they’re the people who are like, ‘I hate what’s on the radio and I hate that all of everything is fabricated.’ But then something like me comes out that’s organic — that’s new and fresh — and they hate that, too.”

She arrives an hour late to the interview because she got held up with a few young girls outside the station who thought she was Lady Gaga. She decided to take photos with them anyway. “It’s just like, ‘What the f–k you want?’” she continues. “‘Why don’t you go make a song and listen to yourself and shut the f–k up, you know?’ S–t.” She is wearing cutoff Levi’s jean shorts, white Air Jordans and a Matt Groening for Comme des Garçons T-shirt covered in Simpsons characters.

She is a young 21 and is covered in tattoos she started getting when she was 15. Her right arm is covered mostly in cartoon characters — Goofy, Sailor Moon, Daisy Duck holding a .22 and Mickey Mouse inside a hamburger. She used to have a tattoo of her best friend’s name, Delila, but they had a falling out and the Gothic script has been written over to say “Don’t Panic.”

Kreayshawn’s biggest skill as an artist may be creating mythology around herself, painting herself at once as a victim and a visionary. She’s simultaneously an artistic underdog and too big for her fame, which at this point has still mostly been conjured in blog posts, YouTube and Twitter. Short and skinny, she carries herself like a miniature West Coast Amazon. She sweats confidence. In “Gucci Gucci,” she describes swagger coming out of her ovaries.

The Kreayshawn creation myth started 21 years ago in San Francisco, where she was born Natassia Gail Zolot to Elka Zolot, a tattooed 17-year-old second-generation Russian-American who sang and played guitar in a series of female surf-punk bands. Kreayshawn moved to Oakland when she was 10. “I always had to raise myself from a young age, so that always gave me a sense of responsibility,” she says.

“Me being stuck in this white girl rapper category thing — I don’t like that,” she reiterates for the second time of the day. “If anything, I’m an artist. I do all kinds of things.” She wants to be a film director more than a rapper and she’s a big fan of filmmaker John Waters. She had just seen “Pecker” — “an amazing story about a photographer who is shooting trashy s–t in Baltimore and New York” — and it really resonated with her.

Her napkin is smeared with her lipstick from the morning while she explains where her confidence comes from. “I’m just worried about so many other things. I don’t care if I’m white, and I’m living in Oakland. I don’t care if I’m skinny. I’m just being me. I’m a funny person and I like talking.”

Then she remembers moments when she didn’t feel confident: “When I was younger, growing up in the ‘hood, being the only white girl, like, there’s time when you’re like s–t, it sucks being white, you know?”

Kreayshawn’s gritty side is tempered by her playfulness. On her hand she has a tattoo of a telephone dialpad, an idea she came up with while she was “super high” and working as an interior landscaper, one of many odd jobs she’s held to fund what she calls her “art goon” lifestyle. She’s also worked at Starbucks and Ikea and sold prescription stimulants to college students.

“I was like, ‘I bet nobody has ever thought of that,’” she says about the phone tattoo. “There can’t be one person in this world who’s thought of that, so that night I went and got it.”

She also has twin teardrops on the outside of both index fingers below the knuckle to use for effect when she rubs fake tears from her eyes.

Kreayshawn didn’t finish high school, but she charmed her way into the Digital Film Institute at Berkeley though she couldn’t get a loan and didn’t have money to pay her tuition. “At the time I was reading this book, like, ‘Creative Process Thinking’ and it teaches you how to, like, manifest your own destiny by pre-conceptualizing things like it already happened,” she remembers. She convinced the dean and his wife to give her a scholarship and then dropped out after eight months.

She never got along with her fellow students and she — the scholarship student making rap music videos for class — was implicated in the disappearance of a $1,000 cable. But her real undoing at art school was her bullheadedness. Once she had what she wanted, she didn’t want it anymore.

Art school diploma or not, she seems to be doing all right. The Red Hot Chili Peppers, who were California art goons themselves once upon a time, asked Kreayshawn, the artist-rapper-director, to direct their next music video.

Her rap career is working out well so far, too. In the two-plus months since “Gucci Gucci” went online, Snoop Dogg contacted her through Twitter to hang out and she collected plaudits from Drake, who called in live to one of her radio interviews to flirt with her. Perez Hilton has written oddly glowing blog posts about her. Lil’ Wayne borrowed the “Gucci Gucci” beat for his new mixtape, and her song played in the background of the “Entourage” season premiere. The night before her private show in New York, she was nominated for an MTV Music Video Award in the Best New Artist category, with the likes of Wiz Khalifa and Tyler, The Creator, another young West Coast rapper who has become pretty famous very fast.

“I’m the newest of all the new artists, you know what I’m saying?” she says as lunch is nearly through. “You couldn’t ask for anything more.”

Later that night it is time for her label showcase. About a hundred fans, who had gotten on the list for the secret show, line up outside of the Lower East Side burlesque club The Box in the heat to see her perform. One young fan gets too excited too early and throws up something flourescent green on the Chrystie Street curb before making it inside.

Kreayshawn takes the stage with DJ Lil Debbie, her hype woman, a doppelganger in glasses and the second third of her crew, White Girl Mob. (“She doesn’t know how to DJ. It’s hilarious, right?” Kreayshawn mentioned earlier that day.) While Debbie flails her arms and dances with a microphone at the side of the stage, Kreayshawn performs her four songs: “Bumpin Bumpin,” “Rich Whores,” “Gucci Gucci” and “Left-Eye,” a new one about exacting revenge on lovers who cheat.

“I’m Lorena Bobbit chilling in your bed,” she raps. “I’m Britney Spears on hella drugs and I just shaved my head.”

Representatives from the label cower toward the back of the room while the front-row fans scream along to the catchier parts of her final number “Gucci Gucci,” doing their best to keep up with the rapper they’d fallen in love with on the Internet.

She and Debbie are off the stage in about 14 minutes.