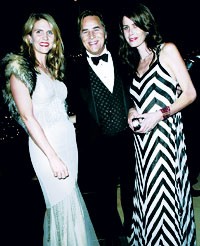 Mazar, who was wearing a circa-Fifties, salmon-colored Lilli Ann suit, has designs of her own: “I know all there is to know about Ferragamo and I really want to work with them.” At least the commute wouldn’t be bad for part of the year. She and her husband, Gabriele Corcos, who was feted with a rousing rendition of “Happy Birthday” at dessert time, split their residence between California and his family home in Florence.

Earlier in the day, the Malibu moms set — including chairs Lisa Kudrow, Crystal Lourd, Marin Hopper and Kim Uzielli — hosted the first annual Get Tied to the Cause luncheon at the Hotel Bel-Air. Among the hot items up for grabs during the auction was Ford’s new Escape Hybrid SUV.

“Come on, whoever wins this will get one before Leonardo DiCaprio!” said auctioneer Kudrow, referring to the 1,000-person VIP wait list for the vehicle. The event, benefiting the Susan G. Komen Breast Cancer Foundation, also featured a Lilly Pulitzer fashion show, although the designer couldn’t make it. She was at her 60th high school reunion in Palm Beach.

Friday night, Liane Weintraub was able to cross one lifelong goal off her list: bringing New York City Ballet to the Dorothy Chandler Pavilion. “It’s a dream come true,” she enthused. NYCB’s visit not only marked the end of the year-long centennial celebration of George Balanchine, whose choreography was showcased that evening, but it was also the first time in three decades that the company danced in the city. Under twinkling lights and yards of midnight blue chiffon inside the center, dinner counted a few of Tinseltown’s ballet supporters such as Danica Perez, Kimberly Marteau Emerson, Alyce de Roulet Williamson, Alicia Silverstone, Cheryl Tiegs and Esther Williams, who was wheelchair bound because of a broken ankle. Still, Williams insisted she could’ve leaped out upon seeing the display on stage.