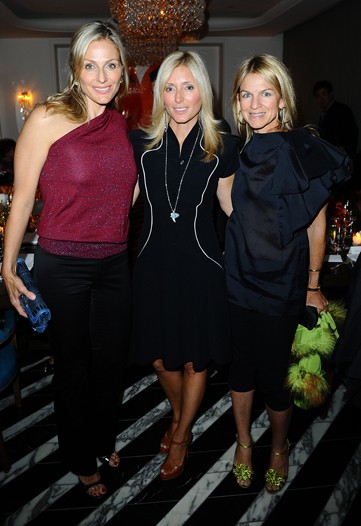 ROYAL FAMILY: Princess Marie-Chantal of Greece’s store opening event in Beverly Hills on Wednesday was definitely a family affair, as a slew of celebrity shoppers turned out with toddlers in tow. Minnie Driver, Sharon Stone, Monique Lhuillier, Angela Janklow and Breckin Meyer were among those who mingled in the Beverly Hills store. “I wish they had this stuff in my size,” said Stone, who was later pursued by several zealous fans camped outside as she exited the store. “I love stripes and, obviously, seersucker for the summer is just divine,” said Driver, whose son Henry is nearly eight months old. “The (Marie-Chantal) line is such a refined way to dress children. The Europeans have always had it right.”

The night before, Marie-Chantal’s sister, Alexandra von Furstenberg, hosted a girls’ dinner in her honor at Cecconi’s. “I hear this is the cool new place to go,” said Betsy Bloomingdale of the bustling restaurant.

As the ladies including Veronique Peck, Laura Dern, Jacqui Getty, Kathy and Nicky Hilton and Stone sipped Bellinis in the restaurant’s private room, the London-based princess mused, “More and more people I know are moving to Los Angeles, and I’m often here myself. It seems to be a more exciting place than New York at the moment, but maybe it’s because I’m not young and single anymore.”