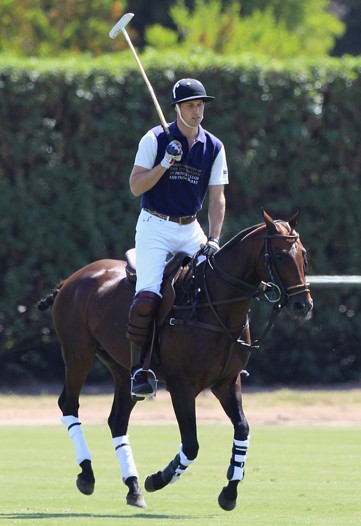 Talk about making an entrance. The 800 people gathered at the Santa Babara Polo & Racquet Club in Carpinteria, Calif., on Saturday afternoon paused from swilling Champagne on the manicured fields when the sound of helicopters overhead suddenly drowned out the music. First one chopper, then a second, landed a few hundred feet from the village of white tents where the horsey set had gathered at $4,000 a pop for the ultimate shoulder-rubbing experience: An afternoon in the company of the Duke and Duchess of Cambridge in Southern California for the weekend on the final leg of their first official North American visit.

“They’re here!” everyone said excitedly as they watched the door open and Prince William and Kate emerged, then made their way across the lawn toward the red carpet.

“William, what do you think of America?” shouted one reporter, tossing protocol to the wind (press had been informed that the couple would not be doing interviews). The prince looked relaxed and ready to answer, before smiling and moving on.

“Kate, who are you wearing?” another reporter yelled excitedly.

“It’s really.…,” the Duchess said, before trailing off, perhaps forgetting she was at the center of one of the most anticipated events of the year. A press release went out minutes later confirming the hand-painted floral chiffon dress was by Jenny Packham.

The couple proceeded to an outdoor cocktail area shielded from general admission guests, who paid $400 to sit in the stands opposite the VIP seating. Tiffany Blue tablecloths, in honor of the jewelry company, the Foundation Polo Challenge’s main sponsor, covered the tables. Silver bowls filled with white hydrangeas and tulips dotted the lawn, while a small, and random, assortment of celebrities dotted the crowd.

“I’m so thrilled that we [Brits] are young and hip and that England’s going around the world with these gorgeous young people,” said Brit ingenue Alice Eve. “It’s been a long time since we’ve had that. We’re so stuffy and superior, so these young cool modern people make me glad to be English.”

Zoe Saldana had her mind on etiquette: “I think she’s a lovely young woman and he’s a lucky man. If I get to meet them, I’m going to be respectful like my mom told me to be.”

For the most part, the couple was left in peace as they dined on a lunch prepared by Giada DeLaurentiis at a table of dignitaries. At fashion sponsor Jack Wills’ table, two away from the royals, Alex Pettyfer chatted with model Karlie Kloss and Joe Jonas. After dessert of trifle and sips of Scotch whisky, the VIP crowd headed to the grandstand to watch as the Prince scored four goals to win the match 5-2 against team Audi.

Kate, wearing sunglasses, smiled and clapped each time her husband scored, although William’s England Polo teammate and friend Malcolm Borwick had explained that, “No wife likes to watch her husband play, it’s balls whizzing by your head at 30 miles per hour. Very dangerous.”

The Prince had warned earlier that his return to Santa Barbara would depend on the outcome of the game. “I’m a sore loser,” he had offered. But fears of future royal snubs were put to rest as Catherine presented him with a silver winner’s cup, crafted, naturally, by Tiffany.

He kissed her on each cheek, prompting a collective sigh from the crowd.

Minutes later, the couple was back in their chopper en route to Los Angeles, where they were due to arrive at the BAFTA-Los Angeles Brits to Watch black-tie dinner. The Hollywood heavies were instructed to arrive an hour before the couple so as to be seated inside when they made their way down the red carpet, which meant the likes of Jennifer Lopez, Nicole Kidman and Barbra Streisand — the latter two were seated at the royal table — made sure to get there early, for once.

Most stars, keenly aware that for once they were not the focus of the evening, eschewed the press, but the air-kiss crowd still stood conspicuously just outside the Belasco Theater doors to greet each other. Everyone from Jennifer Garner, Elizabeth Banks and Blake Lively to James Gandolfini, Don Cheadle and Paul Rudd walked by dressed in their finest. When asked what she would say to the couple, Kidman threw up her hands.

When the motorcade pulled up at 8 p.m. sharp and the Duke and Duchess emerged from their Range Rover, Will in a tux and Kate in a pale lilac pleated Alexander McQueen gown, the crowd went wild. The couple waved, walked down the now-clear red carpet, and shook hands with a line of fans just outside the theater door before William put his hand on his wife’s back and guided her inside.

Shortly before she went in herself, Mary-Louise Parker had summed up the fascination with L.A.’s famed weekenders.

“Well I’m such a romantic I’m so enchanted with them,” the actress said. “They are everything you want them to be.”