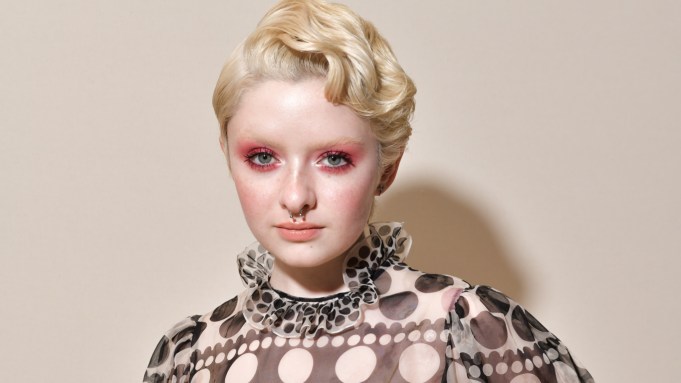 LIFE IN COLOR: In the sea of black and navy, the front-row guests at the Valentino show on Sunday looked like a flock of exotic birds.

Lachlan Watson was sporting a chiffon polka-dot dress with a ruffled collar, which the actor accessorized with a brand new look: a shock of peroxide blonde hair.

“I’ve been blonde for about a week,” said Watson, who identifies as non-binary. “And yes, I am absolutely having more fun.”

What prompted the bold decision?

“Boredom,” laughed the 18-year-old “Chilling Adventures of Sabrina” star, who is taking time to figure out what’s next. “I spent 10 months not being allowed to dye my hair, so when I got one day off, I spent five hours to bleach it all,” Watson explained. “I just needed a change and wanted to rebel a little bit I think.”

Naomi Ackie was peering anxiously outside the show venue, for it was bucketing down with rain. “I had an umbrella to come in, but I don’t know where it’s gone,” said the British actress, who was sporting a long, bright pink skirt with lamé flowers. “It might be problematic getting out of here.”

Ackie is gearing up for her first musical, “The Score,” in which she will star opposite Johnny Flynn and Will Poulter.

“The only thing that being in ‘Star Wars’ has changed is that I get to come to these sort of things,” said the actress, who played Jannah in “Star Wars: The Rise of Skywalker.” “Other than that, I still take the tube back in London.”