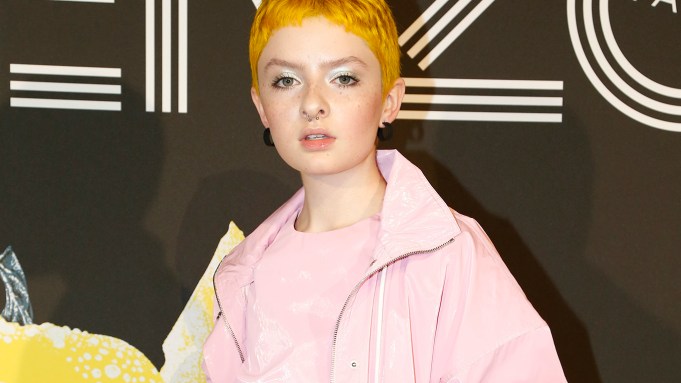 TALL ORDER: Sitting front row at the Kenzo show in Paris on Wednesday evening, Lachlan Watson reflected on what had been a packed day so far.

“We went to see Mugler, Courrèges and now Kenzo, and they’re so drastically different — it’s been so fascinating,” said the actor, who plays Susie in the Netflix series “The Chilling Adventures of Sabrina.” Watson, who identifies as non-binary, was wearing a pink PVC minidress and matching coat.

“We changed in the car and we hadn’t tried this on yet. We had to get it tailored and adjusted because I’m too small for literally everything. So we were just crossing our fingers that it would fit, and it did,” said the 18-year-old, who is taking a break before part two of the show’s first season drops on Netflix on April 5.

“I like to say the biggest project I’m working on is myself. Right now I’m taking a bit of a breather, trying to figure out where I’m at, who I am and what I want to do, which is why I’m here. I think myself and my fashion is the biggest thing I’m trying to work on right now,” Watson said.

The actor’s presence at Paris Fashion Week is yet another sign of how the fashion community is embracing new definitions of beauty — though it appears there is still one barrier that is hard to jump for the 5 foot, 1 inch star.

“I would love to work with designers in a modeling capacity. Unfortunately, I’ve always been told that I’m too short so it’s funny — you would think that gender would be my biggest obstacle, but really it’s been my height.

“I’m trying to ride the wave of the body positivity movement, because we’ve seen so much positivity with curvy women and gender queerness, but I’m still trying to show that it’s not quite all-inclusive and I’m trying to represent something different,” Watson said.

Farther down the row, David LaChapelle was catching up with Wendy Leon, the mother of Humberto Leon, the creative director of Kenzo with Carol Lim. The 72-year-old features front and center in one of the images from the spring campaign that LaChapelle shot for the brand.

The photographer said it happened by accident. “There were hundreds of people [on set]. I didn’t realize it was Humberto’s mom, and I just grabbed her,” he recalled. “I thought you were one of the models. She was all dressed in all of the prints and she looked so good.”

Leon asked when he would be back in Los Angeles. “I’m going to text you — I want to take you for good dim sum,” she said, thanking the photographer. “Are you kidding? You made the picture,” replied LaChapelle, who is gearing up for a solo exhibition in Turin in June.

Also in attendance was the label’s founder, Kenzo Takada, who turned 80 on Wednesday and was gearing up for a gold-themed birthday party the following night. Guests sat squeezed into tight rows on little platforms, and the reason soon became clear.

The event, to showcase Kenzo’s see-now-buy-now Memento No. 4 capsule collection, was in fact a dance performance, with the platforms moving in tandem with the dancers dressed in the season’s clothes, which featured prints ranging from tomatoes to its signature tiger stripe.

A collaboration between choreographer Nqobilé Danseur and movement director and choreographer Paul Sadot, it made for an upbeat close to the day — not to mention the ultimate Instagrammable moment.