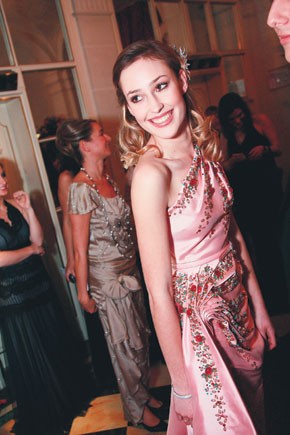 PARIS — Who needs Prince Charming these days? Not, it would seem, the 23 budding international beauties making their debut at the annual Crillon Ball here last Saturday.

“I’m at Stanford for history, but I’d like to get into travel writing,” said Kennedy, who sported a J.Mendel gown. Beatrice and Josephine Bradlee wore Carolina Herrera and Givenchy, respectively.

Lily Collins, daughter of musician Phil Collins, has already embarked on her media career. “I’ve already worked for Elle Girl and Teen Vogue. I always knew I would be a journalist,” she said. “I’m working on a new program for Nickelodeon, but ultimately I’d like to have my own show.”

Just don’t expect the debutante to pursue a musical career any time soon. “For singing, she takes after her mother,” joked her dad. “But I would love her to write a song.”

I.M. Pei was proudly watching granddaughter Olivia Pei. “It was the perfect excuse to come to Paris,” said the famed architect, who is working on a hotel in New York in connection with Paris Buddha Bar.

At one point during the party, an architect’s expertise would have come in handy, given the volume of some couture gowns.

“I’d like to know how to manage the ladies’ room in this,” joked Comtesse Anna de Pahlen as she smoothed down her Versace. It was back to the books on Monday, but the debs were having fun with their Cinderella moment. Joked Tatiana Mountbatten as she swished around the ballroom, “I’d like a marriage in the end.”