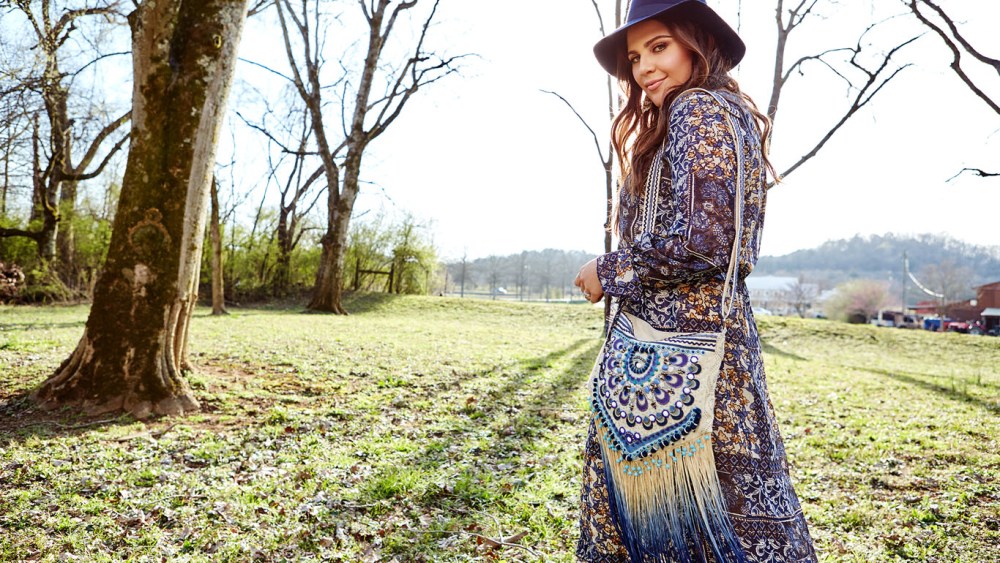 Hillary Scott has always loved fashion, and thanks to HSN, she’s finally able to indulge that passion.

In collaboration with the Florida-based shopping network, the female lead singer of the award-winning Lady Antebellum country music trio has created LaBellum, a boho-chic collection of women’s wear that blends Western details with “a little Southern magic.” Scott will appear live on the network at 9:00 p.m. tonight and at 1 p.m. Friday to promote the line, which had a soft launch on April 1.

“Ever since I was a little girl, I’ve been so intrigued and curious about fashion,” Scott told WWD. From an early age, Scott said she was influenced by her mother, Linda Davis, a country singer whose duet on “Does He Love You” with Reba McEntire in 1993 reached number one on the Billboard charts.

“What I wear is extremely important,” she said. “And I felt like this was the right time to take what I’ve learned from all the women in my life.”

She opted to work with HSN because when she visited the company’s headquarters in St. Petersburg, Fla., she found herself surrounded by a team of “brilliant, hard-working women who were warm and kind. That fit who I am and who I want to be so I was in from the jump.”

To prepare for her visit to the network, Scott said she tuned in Tuesday when Little Big Town’s Kimberly Schlapman was on HSN promoting her line of kitchenwear as part of the network’s monthlong Music City Nashville event. “I was taking notes,” Scott said with a laugh. “She’s so good on camera and connecting with viewers and buyers.”

When working on the own collection, the 31-year-old Scott said she had a lot of input to share from her 10 years in the music business with Lady A and her four years as a mom. Scott and her husband, Lady A’s drummer Chris Tyrrell are parents to a daughter, Eisele Kaye.

“I’m drawn to prints, but I’m also an extremely tactile person and care about how things feel.” So the embellished T-shirts that are comfortable enough to wear to the gym or a yoga class but are dressed up with sequins, are among her favorites.

Ditto for the chiffon boho peasant maxi, which she said she loves as a feminine alternative to jeans.

While working on the design of the collection with the HSN team, Scott said she wanted to make sure that the line had pieces that would appeal to women of all ages. “My little sister is 16, so she looks for things that are youthful and young. And my mom is 55 and is in a total different phase of life. But they both love some of the same things, so it shows the line is ageless.”

Scott said that since receiving some samples, she’s worn a few pieces on stage, including a black beaded sequined bell top.

And although the LaBellum line is women’s wear only, Scott said her band members — Charles Kelley and Dave Haywood — have been supportive rather than jealous. “They’ve been so sweet,” she said. “The first day I wore the blue chiffon maxidress, I pulled the tag out of the back and said, ‘Look, it has my name on it!’ They were so excited.”

Exciting, too, is the success Lady A has experienced since returning from a self-imposed two-year hiatus from the country music scene. Their comeback song, “You Look Good” is in heavy rotation on country radio and the lead single off their upcoming album, “Heart Break,” which will be released on June 9. The album will be supported by the You Look Good tour that will kick off at the end of May.

“This is one of the busiest years we’ve had,” Scott said. “We took two years off from recording, but we’re coming in so refreshed.”

She said that in a quest for a different experience with their sixth studio album, the trio “pulled apart the way we make records,” which has historically consisted of writing on the road or at home in Nashville.

“But we were ready to flip that on its head so we planned a writers’ retreat and took eight writers to a beach in Florida,” she said. “That’s where we wrote Heart Break and we knew that was the song to create a record around.”
While Lady A was on break, however, Scott indulged another passion, which was to record an album with her family. Love Remains, a gospel album featuring her mother, father Lang Scott and sister Rylee, won a Grammy for Best Contemporary Christian Album and the song, Thy Will, which she co-wrote, napped the honors as Best Contemporary Christian Song.

“It was such a joy to experience, and continue to experience, performing with my family,” she said. “The greatest success of that album is that it will live forever.”

So will her sister one day become a recording artist in her own right? “Every couple of months, she wants to do something different,” Scott said with a laugh. “And right now, she concentrating on AP history and chemistry. That’s perfect for when you’re 16. But playing piano and theater are among her biggest passions.”

And from the looks of things, the Scott legacy may continue into a third generation. Eisele Kaye is already showing her propensity for music, singing “How Far I’ll Go” from the Moana movie and belting out “Tomorrow” from Annie.
“It’s neat to see her have the music bug too,” Scott said. “It’s crazy how life works and what kids get from you. I just wish the saucy, challenging part would have skipped a generation.”