Meat dress and cigarette shades among the iconic designs on display at MGM Park Theater.

Lady Gaga at the Costume Institute Benefit celebrating the opening of Camp: Notes on Fashion, Arrivals, The Metropolitan Museum of Art, New York, USA - 06 May 2019

When Lady Gaga’s longtime creative team, Haus of Gaga, accepted the task of erecting a shrine to the singer’s style on the Las Vegas Strip, fashion director Nicola Formichetti turned to her famous Little Monsters for help choosing which looks would get the time capsule treatment.

“There are a few [fans] that have all of the information,” he explained Wednesday during a preview of the exhibition at the Park MGM. “We’ve been working very closely to find out their favorite costumes, everything has been documented by them.”

Those fans can now see their efforts realized at Haus of Gaga/Las Vegas, a permanent collection of costumes, gowns, headwear and accessories that her team has been archiving since Gaga’s breakthrough 2008 “Just Dance” video. 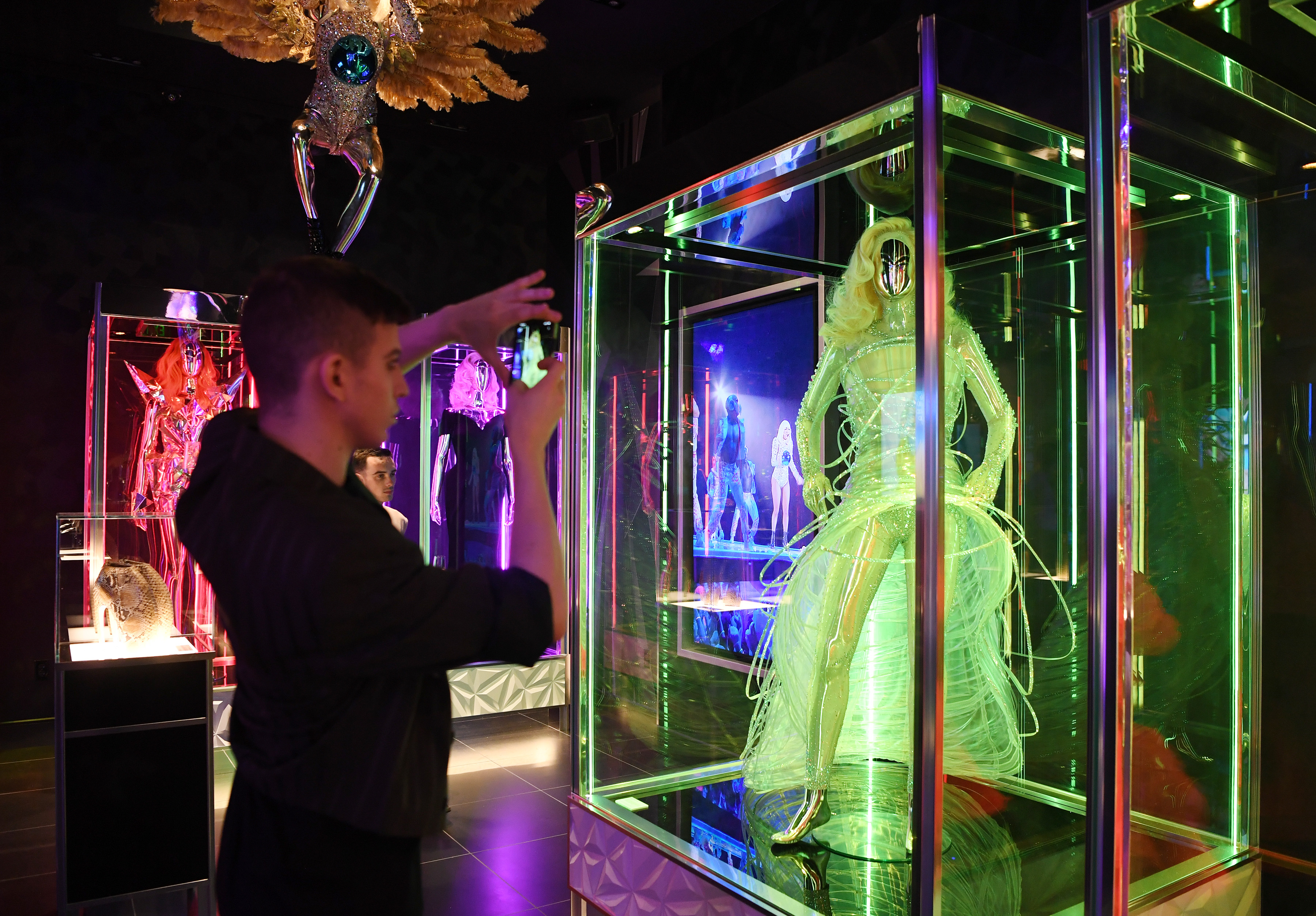 “It’s been a dream to create all of her outfits in one place,” Formichetti said, standing alongside such signature looks as Franc Fernandez’s 2010 MTV Video Music Awards “meat dress” (it’s since been dried, dyed and turned into jerky) and glass-encased designs by Alexander McQueen, Nasir Mazhar, Giorgio Armani and Philip Treacy, among others, that have been worn onstage or on the red carpet.

While Haus of Gaga/Las Vegas hearkens back to the days of the city’s now defunct Elvis-A-Rama and Liberace museums, fans won’t have to venture off the Strip to find it. Instead, those who flock to Gaga’s “Enigma” and “Jazz and Piano” shows will see the collection, which doubles as a retail outlet, outside of the entrance to Park Theater at Park MGM, where the singer first kicked off her two-year residency in December 2018. There is no admission fee for this “Monster Mecca,” but guests are encouraged, upon entry, to make a donation to Gaga’s Born This Way Foundation, founded in 2012 by the singer and her mother, Cynthia Germanotta, with a mission to empower young people. 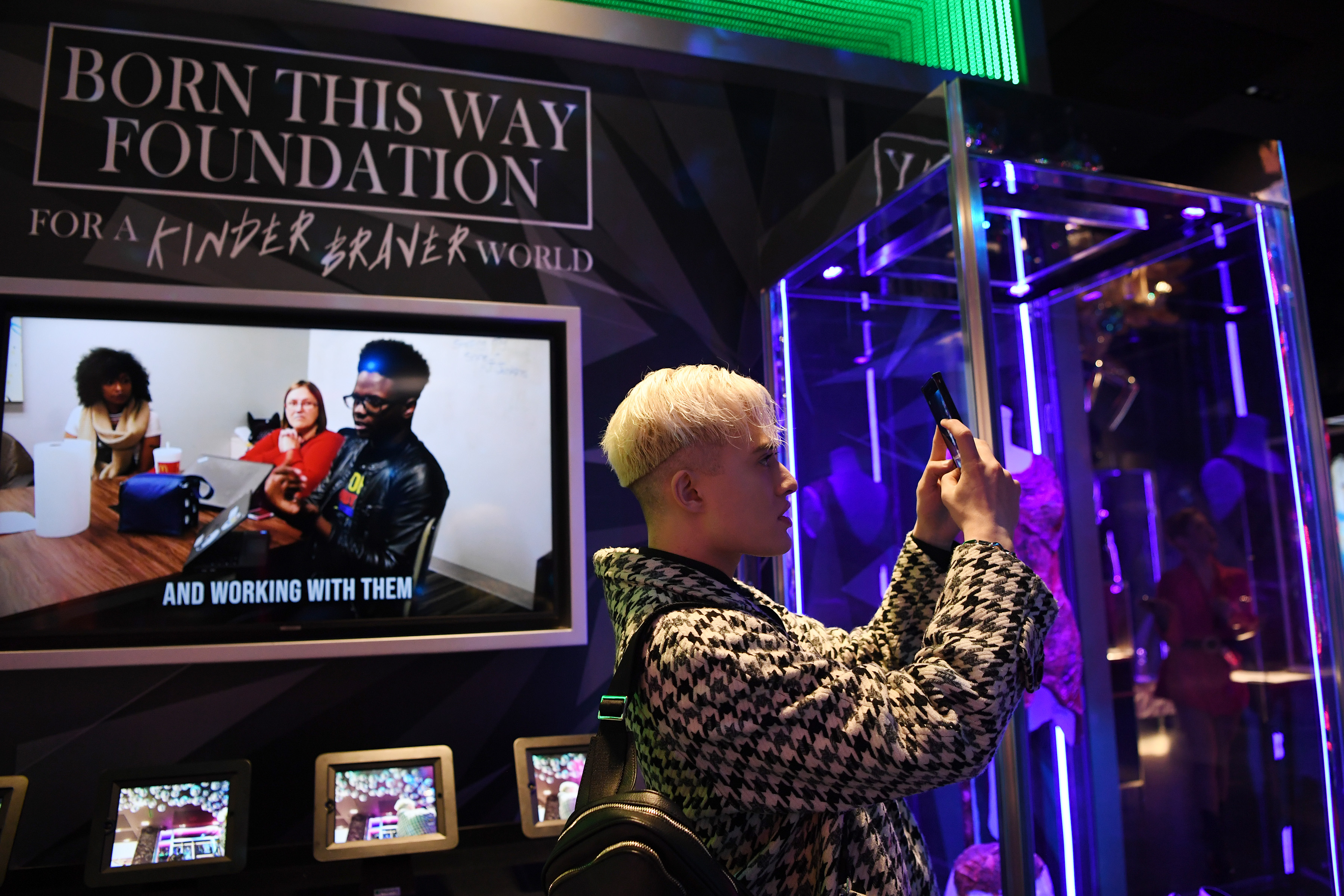 Once inside, visitors can pose for selfies under the blood-soaked “Paparazzi” bodysuit from the 2009 VMA’s, or gaze at Gaga’s handwritten lyrics to “I’ll Never Love Again” in a display case that features one of her Erin Benach-designed “A Star Is Born” costumes. Formichetti’s favorite piece, custom sunglasses adorned with half-smoked cigarettes from Gaga’s “Telephone” music video, is also preserved behind glass.

“We made it on the day of [the video],” he said of the Haus of Gaga original. “We came up with the idea on the spot.” 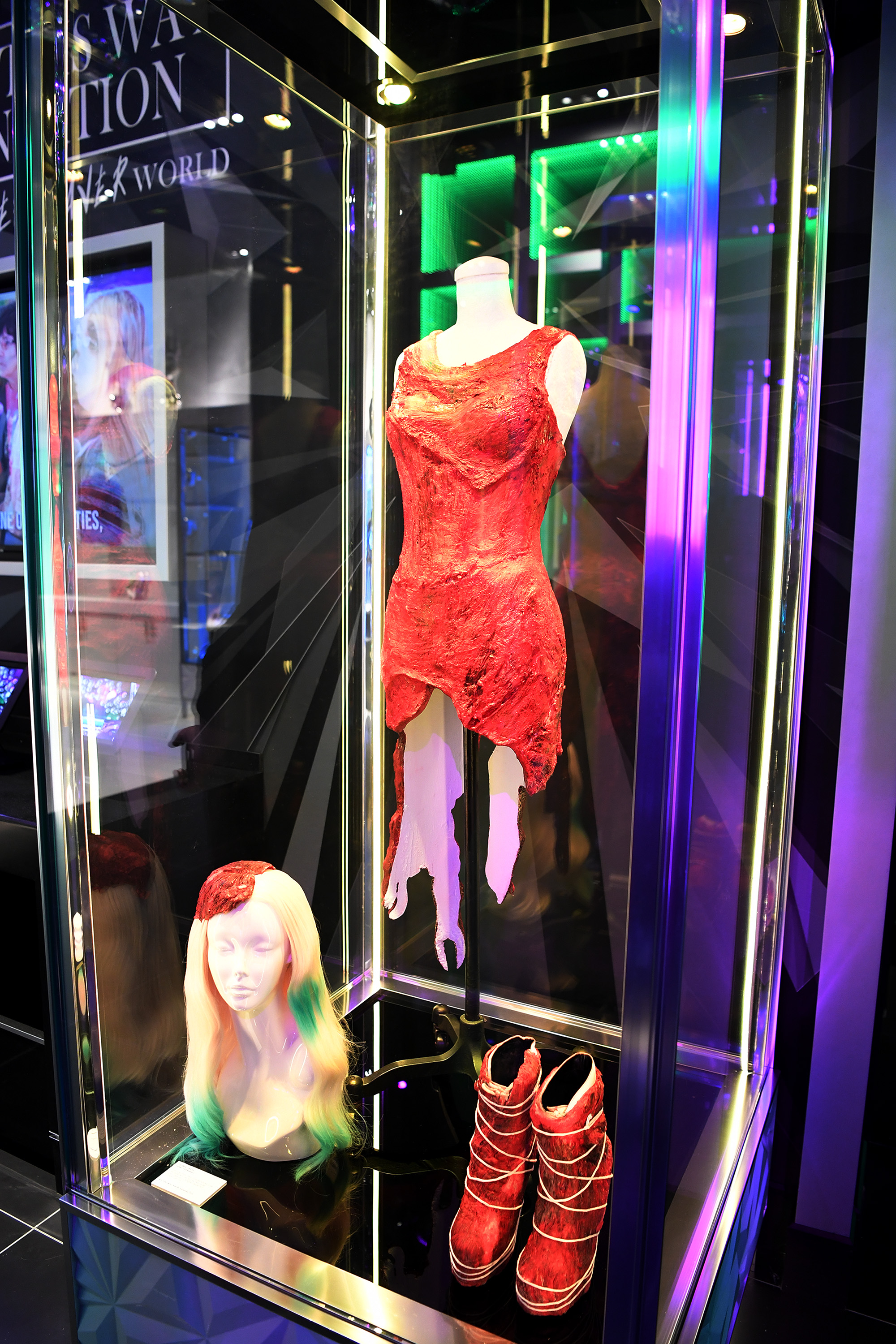 For diehard fans who want to take home a piece of history, Haus of Gaga/Las Vegas will place select items — dresses excluded — up for auction in the coming months, with the proceeds benefiting the singer’s foundation. Additionally, Formichetti plans to rotate the collection during each hiatus — the second leg of Gaga’s residency runs through June 15 and starts up again in October — so fans have a reason to keep coming back.

“Every time she returns I want to keep evolving it,” he said. “We want to keep the magic of the past so fans can enjoy the moment now.” 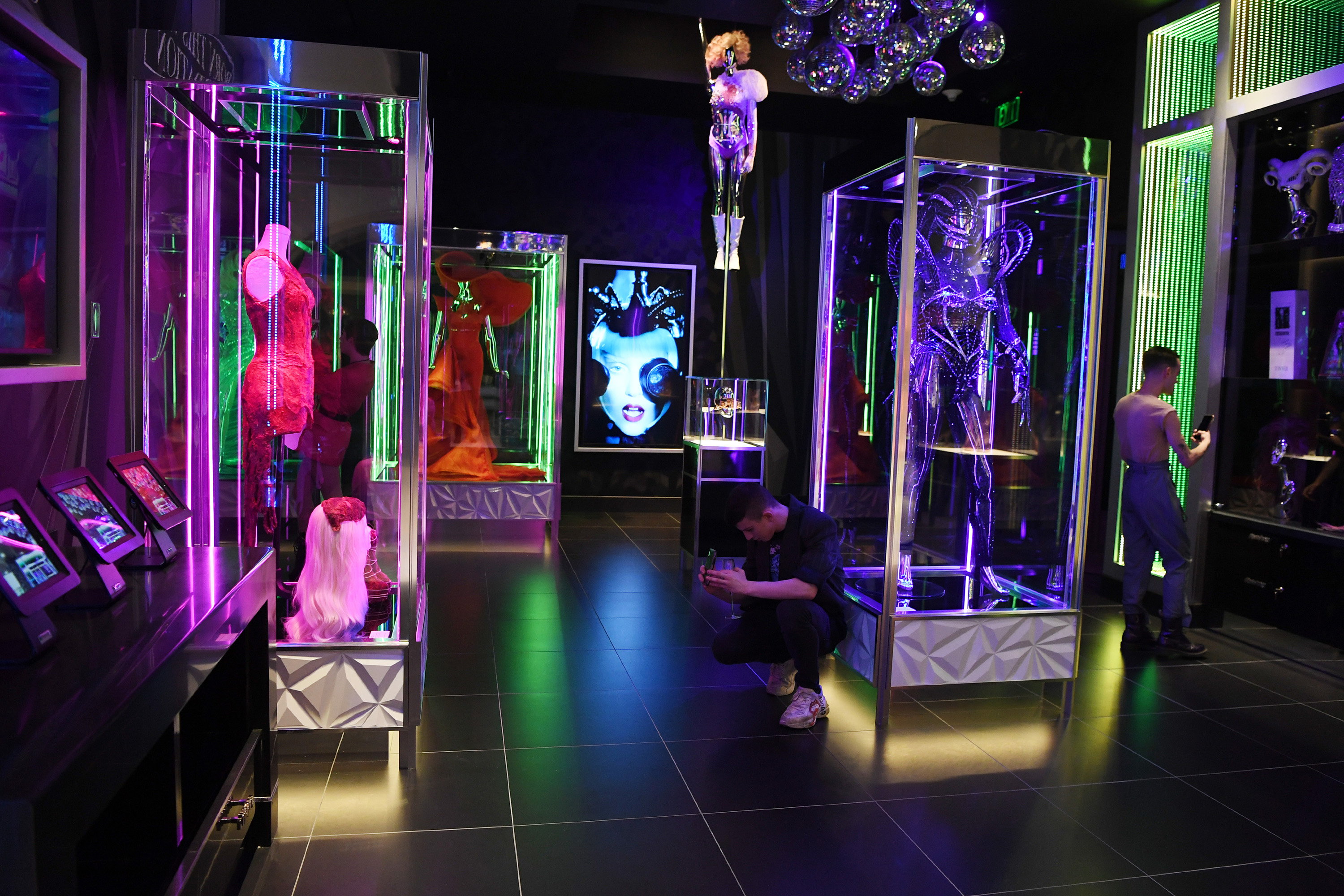 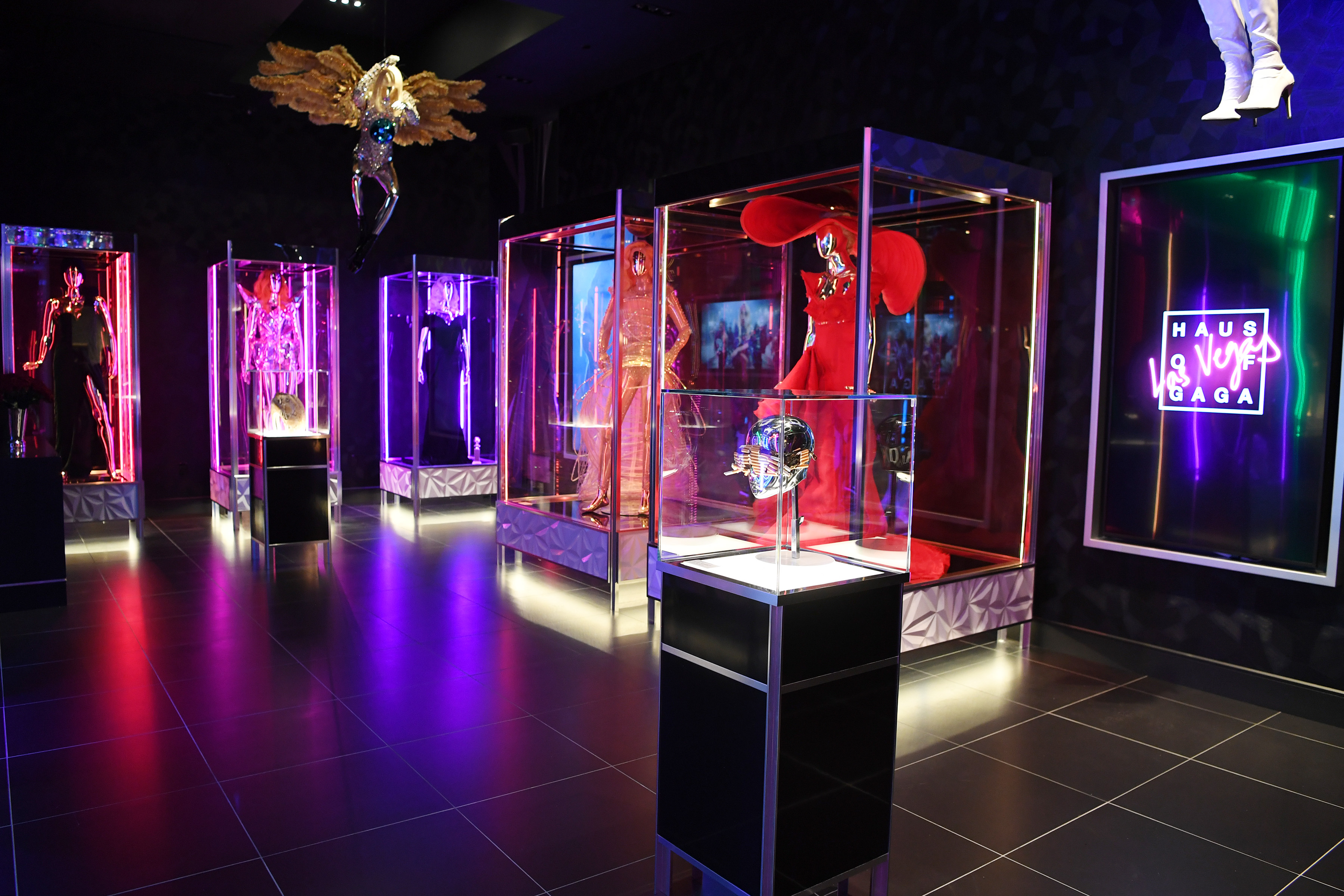