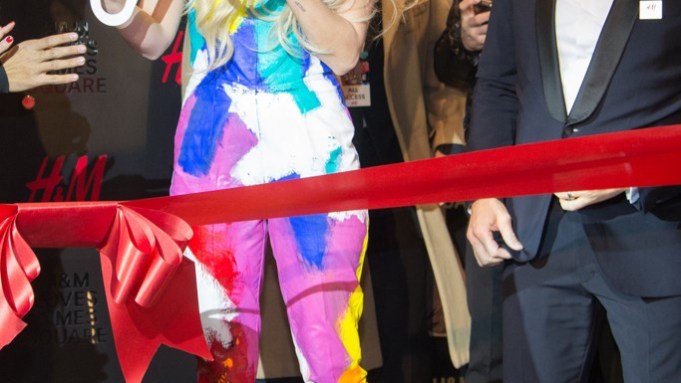 The line reportedly started forming around 5 p.m. Tuesday. It got interminably long only a few hours later, soon snaking around the Condé Nast building on 42nd Street, and up Sixth Avenue for three blocks. Penned in by NYPD-manned barricades, Lady Gaga’s bundled-up fans shiver.

“I’ve been here since 9 a.m. this morning,” says Sonia Riviera, 19, her teeth chattering. A sea of equally frothy fans surround her. “But it’ll all be worth it.”

The start is at 42nd and Broadway, where the 42,000-square-foot H&M store is about to open its doors. A troop of clipboard-wielding flaks barks into headsets by the front. Photographers elbow each other from prime real estate by the thick red ribbon pinned up by the door.

At the epicenter of the torrent is the woman who has ascended to that intangible tier of stardom where one is known globally on a one-word basis: Gaga. She’s perched on a tufted leather ottoman on the store’s second floor, a troop of handlers hovering around her, ready to care for her every whim. The star is on hand as the official ribbon-cutter, due to take place at 12:01 a.m. Thursday.

“They have?” Gaga asks in what appears to be genuine disbelief, when learning that fans had been lined up for more than 30 hours. She then turns to her publicist for verification. “They’ve been out there since yesterday?” she presses. One would think that Gaga — currently in a paint-splattered jumpsuit and a set of plasticky patent sky-high platforms, a shock of bleached blonde hair spilling down her back — is used to being the pulsing nucleus of a press-centric cyclone. “It’s so cold out. They’re going to get sick.”

Her relationship with her fans has been well-documented and it seems to be something of a self-fulfilling prophecy: The more she acknowledges their love for her, the more they love her. “Whenever I go back into the studio and work on a record, I’m always thinking about them. I really am. It’s a totally symbiotic relationship. As they’re showing up, I’m showing up. I work really hard because I appreciate how much they believe in me,” she says. “The saving grace of my life and my universe is that I have them.”

The rabidest of fans are due to get face time with the star via an H&M promotion: 20 of the first 1,000 people lined up were given a golden ticket at random, granting them early access to shop with Gaga for 30 minutes before the rest of the shoppers stream in. “I’m really looking forward to just having a normal conversation with them, really,” Gaga says. “My favorite thing is when fans don’t get too stunned by me or too shocked and I can have a real normal conversation with them. I’m friends with a few of my fans. Like, I have real friendships with some of them because some of them just see me as I am and because we’re so similar.”

The pop star is rounding up a string of press events in New York to promote her new album, “Artpop.” “I’m so tired but it’s worth it. I mean, it’s so great to be home. It’s been kind of healing for me actually because I don’t like to, I don’t like that…” she fades off. “I sort of go from hotel to hotel, car to car. There are so many people, so many cameras all the time but when I’m in New York, I get to hang out with my parents at their restaurant, Joanne, and just eat a big bowl of spaghetti.”