Procter's exhibition "Lagerfeld: Chanel Shows" is on display at London's Four Seasons Hotel this month, despite all launch activities being canceled amid the COVID-19 spread.

LONDON — British artist Simon Procter stumbled into fashion photography by accident but ended up becoming one of Karl Lagerfeld’s closest collaborators with an all-access pass inside his Chanel shows.

There, he produced images that morphed into art pieces by experimenting with space and composition and combining multiple images together to create visuals that brought Chanel’s runways — and larger-than-life show sets — alive.

“I use the language of photography and the final product might look like what you would perceive as a normal photograph, but it’s something that goes a bit further. The idea is to go a little bit beyond the fashion world and to create pieces in their own right,” says Procter, who tends to produce one piece at every show and has always tried to look beyond the buzz and celebrity factors in his work. “There’s quite a lot of emphasis on personality and I wanted the pieces to go a bit beyond that context and the grandeur of it all.”

He had been in the midst of working on a book with Lagerfeld to bring the work he had been producing at Chanel shows over the last 10 years together for the first time, when the designer died. But Procter finished the project and published the book with Rizzoli, dubbed “Lagerfeld: Chanel Shows,” which went on to sell out in the first two weeks of publication, and is now in its fourth edition.

“I was actually working with Karl for a few years on this and it was just an unfortunate coincidence that he passed. He was supposed to write a part of it, which sadly he never got around to doing, but the book was in the works for a while, and not to do with his passing,” Procter says. 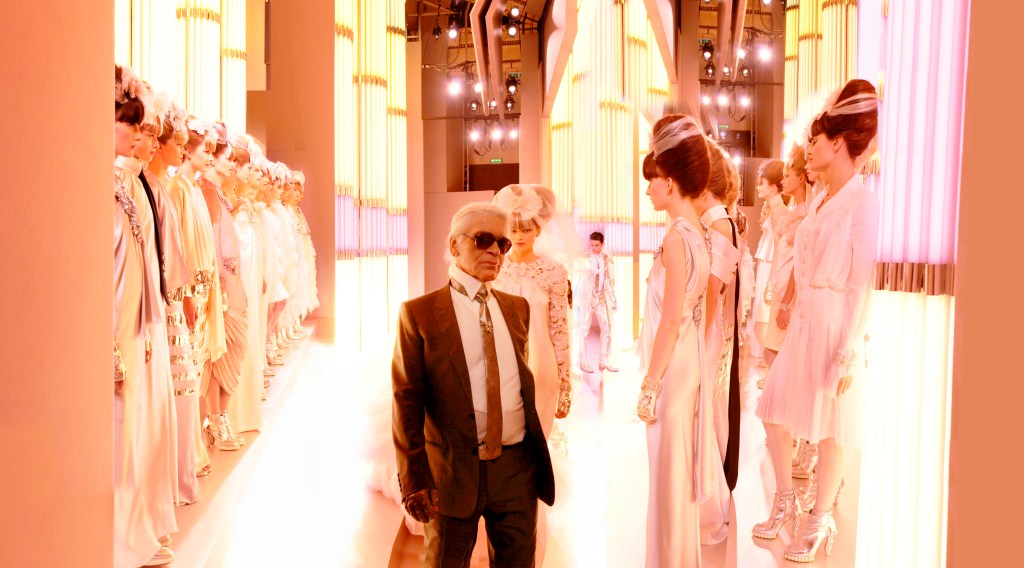 An exhibition by Art Photo Expo ensued in Paris last September, which attracted both art collectors and Chanel fans alike.

“It was like a nightclub. There were people queuing around the block,” Procter adds.

He had been working with Art Photo Expo toward bringing the exhibition to London’s Four Seasons Hotel this month, and while everything is set and on display at the hotel’s Rotunda bar, the launch event has been postponed as COVID-19 spreads across Europe.

What would Karl say about this scary time the world is going through?

“He’d probably have something to say, but I won’t put words into his mouth. But he was certainly a very compassionate person with old-fashioned, polite manners, which is what we need now more than anything,” says Procter, adding that his relationship with Lagerfeld was at the core of his ongoing work with the Parisian fashion house.

“The thing I liked about Karl was that he was really interested in artists and creativity. If you were doing something interesting, and you were committed, he was naturally interested in you,” says Procter, who first met the designer at a shoot for Harper’s Bazaar in 2006. “He had just come from a night shoot. People were saying that he might not even turn up, but even though he’d been working all night, he came to do this with us. He just worked really hard and never looked back.” 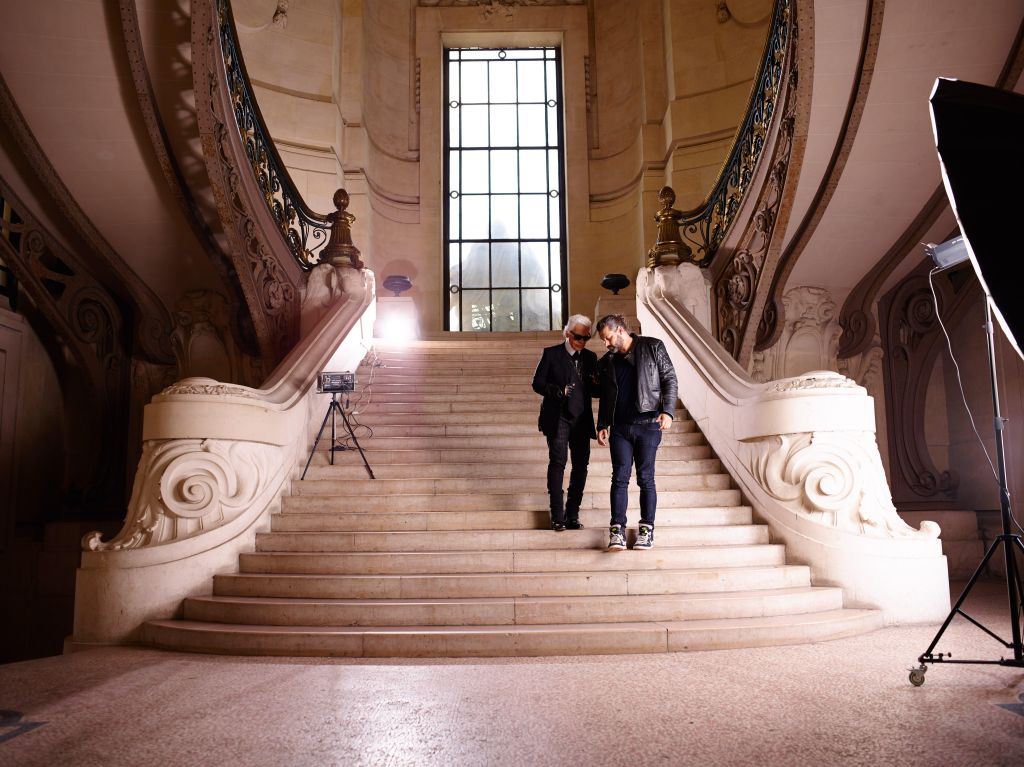 Procter also remembers enjoying the element of surprise every time he walked into the Grand Palais to discover the extraordinary sets Lagerfeld dreamt up season after season, from rockets to giant cliffs.

“Because I studied photography and fine art, I was fascinated by the things they made. When they created the huge cliff with water, I thought technically that was really impressive. I was very close to it, so I could see the work that went into it and how it looked like it had been there a long time,” he adds.

Brands are now being criticized for the grandeur of their sets, given their environmental impact, and Procter is seeing a shift toward smaller-scale productions. He still photographs at the house’s shows but has been spending more time shooting and producing his first feature film.

The exhibition is set to run until August. 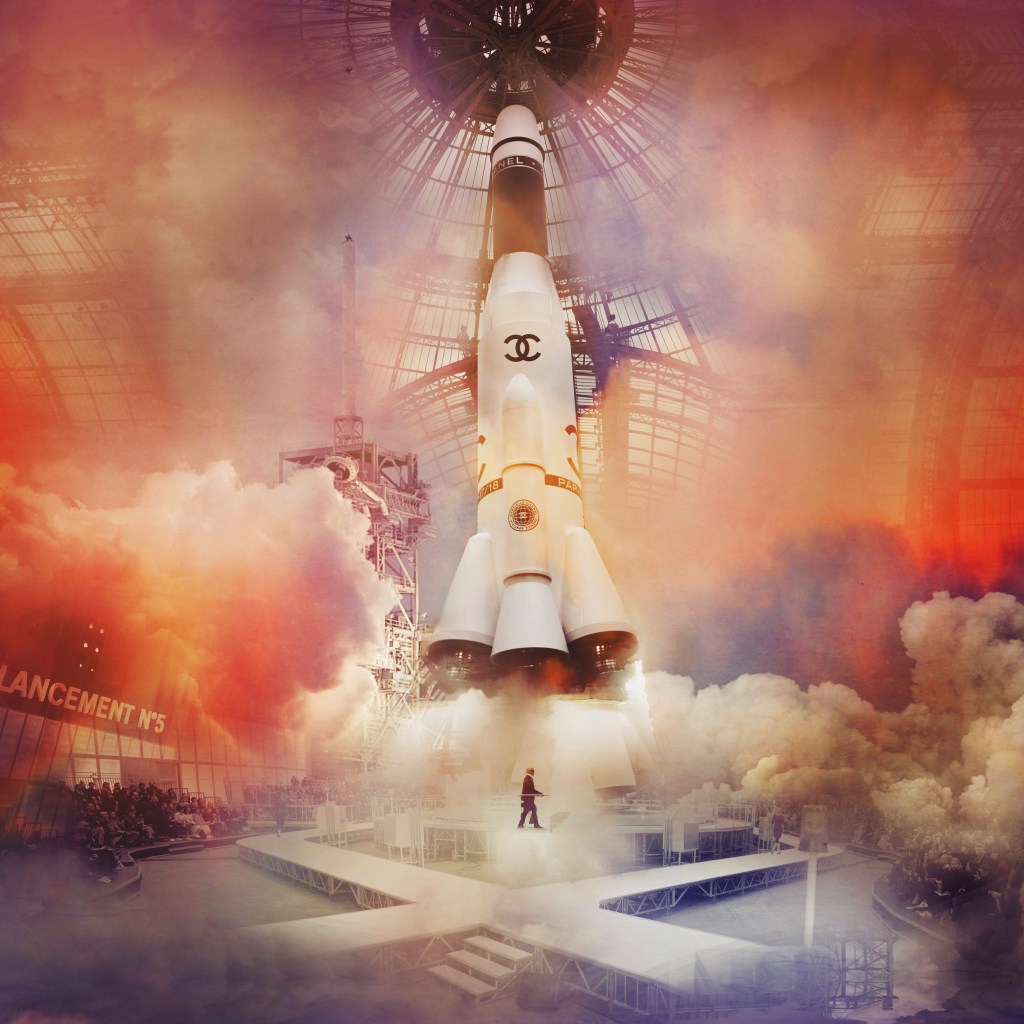 A photograph by Simon Procter from the Chanel rtw fall 2018 show.  Courtesy Photo