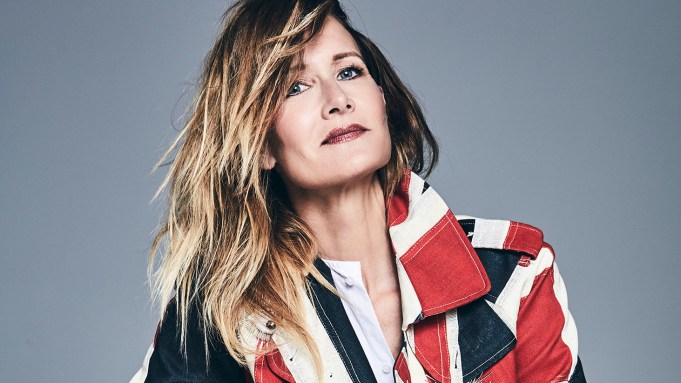 Like many, Laura Dern went to see “Wonder Woman” in theaters this summer and like most, she walked away feeling a deeper sense of poignancy than expected from a traditional summer superhero flick.

“I loved seeing it — and I really loved seeing it with my 12-year-old daughter,” Dern says, after bringing up the film herself from her home in Los Angeles. “People are like, ‘Well, you can’t turn this kind of film into a statement.’ It’s like, no. You infiltrate every story that you tell. It can be a traditional movie, but you respond to something different.”

At 50, the actress has been telling more stories than ever these days, heading into September with her sixth Emmy nomination for HBO sensation “Big Little Lies” — which earned a total of nine nominations — sandwiched between her role on the “Twin Peaks” revival and December’s “Star Wars: The Last Jedi.” She’s just wrapped a new film with Kristen Stewart, and with several more on the immediate horizon, has a sharpened awareness of her power as a storyteller.

“Truth and lies have become a real interesting theme, more than ever, lately,” Dern says, hinting at the turmoil in the political world with the new president. “Frankly, you know better than me as a journalist; it’s a very interesting time to use our voice. So we get to ask questions right now, and where we put our energy, where we can kind of infiltrate a bit…It’s the same on a film – you never want to hit things over the head, but there’s a lot to be said right now and telling stories, whether they’re true stories that are blatant and correct about injustice and a longing for equality and human rights, or it’s disenfranchised characters who don’t even know they’re entitled to a voice – and how interesting to play people who have to make their way not feeling that their voice matters?”

Dern speaks from experience. After all, she has been acting since she was age six, with an extensive oeuvre of film and television work. Yet she’s never been busier than in recent years and, though that’s not how she’d ideally plan it, she can’t seem to say no to roles that matter to her. A moment of reflection is rare; when not on set, she’s perhaps the coolest mom in the carpool drop-off: She says she reads Zadie Smith, binges on “Key and Peele” and hopes her kids let her play The Verve on their way to school.

“The reflection is in the doing, in a way — how amazing that each universe is its own?” she says.

“And not to be taken lightly, particularly in ‘Star Wars’ and working with David Lynch, which are literally otherworldly. As I stand outside of it, it’s everything you dream of, or certainly everything I dreamt of as a kid, that my parents [Diane Ladd and Bruce Dern] had me consider. And I’ve always talked about this, that their greatest advice to me was to always try to be brave in complicated characters, and bring great humor to those characters, even in the saddest of moments, and also never get pigeonholed. And you hope for that and you say that, but it feels like a time that I’m just loving acting so much, and frankly, to have my kids see me doing what I love, as long as I also have quality time with them, has been a great luxury.”

Her daughter Jaya has shown an interest in musical theater and film; her son Ellery, whose 16th birthday Dern was celebrating the day of this interview, has expressed an early interest in fashion. (Both children were with former husband, the musician Ben Harper.)

“When he heard that Christian Dior had invited me to their show, he was [so excited] — he’s a huge fan of what Maria Grazia is doing and knows the designers and loves the line and thought it was so interesting,” she says of her son. “It’s a beautiful, fun conversation to have with your kid.”

Dern, who is a “primarily single parent,” has never shied away from speaking out about causes she believes in and is very clear about what messages she wants her children to take from her example — and from the version of American society they find themselves growing up in these days.

“I focus on what I’ve decided is this country and the country that I describe to my children. And there are very few things that seem clear, but there is zero tolerance for a few things, because we’re Americans, and we’re clear about a few things: Nazis, racists, people who denounce people based on their cultural or religious or sexual preference — like that doesn’t fly in this country,” she says. “Our grandparents and great-grandparents have worked too hard to get us here. So I am continuing to tell my children the story that is what this country is built upon, and there have been some mistakes where there are a rare few who don’t understand. And we don’t have to have compassion for their ignorance, but we can acknowledge it, and we’ve just got to keep using our voice.”

Which brings us back to “Wonder Woman” and its feminism — and, it turns out, earlier days of Dern’s career.

“We did it on ‘Jurassic Park’ — there was a rather feminist line in response to something Jeff Goldblum says about ‘man creates dinosaurs, and dinosaurs eat man.’ Something like that,” she says. “And then I look back and say the line, ‘Yeah — and woman inherits the earth’ and that was such a big deal. It was like here it is, we’re in this formulaic, big movie and it’s this fabulous, fun, feminist moment. Then there are 12-year-old girls watching the movie and they hear that, and it’s one line. For years it was ‘Oh, well that’s more for boys, because it’s a dinosaur movie.’ and that’s what they used to say about ‘Star Wars,’ and now because there are female icons in it, all the girls want to see it as much as boys. So yeah, it’s really exciting to consider with every story that you tell. Every film I get to be part of, [I consider] how we can make it truly relatable, to all of us.”

Tom Bateman, In It for the Thrill of It

Holland Taylor Is Over Being Scared

Ruth Negga, on the Road Again