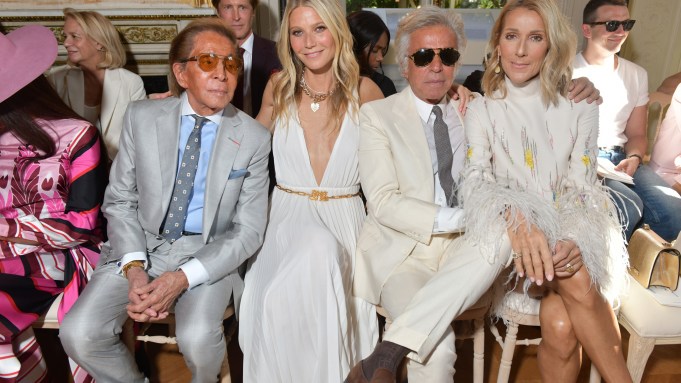 NATURAL WOMAN: Whoops and applause rippled among the salons of the Hôtel Salomon de Rothschild, where the Valentino fall 2019 couture show was held on Wednesday.

Model Naomi Campbell, sitting next to Natalia Vodianova and Valentino Garavani himself, whipped out her phone to capture the moment: 75-year-old actress Lauren Hutton, resplendent in a green silk dress with pink sequined gloves, was strutting along the runway, proving there really is no age to be a catwalk star.

Moments before the show started, actress Kristin Scott Thomas, who was sitting next to Celine Dion, happily discussed her next project, a new adaptation of Daphné du Maurier’s “Rebecca.”

“The film is with Lily James and Armie Hammer,” said the actress, who recently made a cameo appearance in season two of Phoebe Waller-Bridge’s “Fleabag.” “I’m playing the evil Mrs. Danvers — and loving it!”

American actor Sebastian Stan, best known for his role as Bucky Barnes in the “Captain America” franchise, was equally excited about his next film.

“It’s called ‘355’ and it will be unlike any of its kind,” said Stan, adding that he will be starring alongside “a lot of incredible actresses” including Jessica Chastain, Lupita Nyong’o and Penélope Cruz. The film, a spy thriller, will start filming in July.

“I just signed a deal with Netflix to create content for them,” said the “Pose” director, swishing her purple wool cape as she ascended the marble staircase. “I have a couple of shows that I am developing right now for them, and I’m super happy to be able to continue working with my mentor Ryan Murphy.”

Model and businesswoman Jeanne Damas had something completely different to celebrate.

“I passed my driving license,” crowed the founder of ready-to-wear brand Rouje. “So I’m going off on a road trip across Italy this summer, before coming back to Paris in September to open my first Rouje store and restaurant.”

Alongside Hutton, Gigi Hadid — whose brother Anwar was also among the guests — Kaia Gerber and a triumphant Adut Akech walked the Valentino couture runway — the latter blowing a kiss to Campbell as she closed the show to the sound of Aretha Franklin’s “Natural Woman.”

But the most moving moment happened after the show, when Valentino creative director Pierpaolo Piccioli came to take his bow with all his atelier staff, wearing white coats, in tow. They swooped on Garavani, who greeted them like the long-lost friends they are — the designer left his fashion house in 2008 — bringing many to tears, including a very moved Paltrow.