Beloved by "Orange Is the New Black" fans for her role as gawky corrections officer Susan Fischer is cast in the latest "Jurassic" installment. 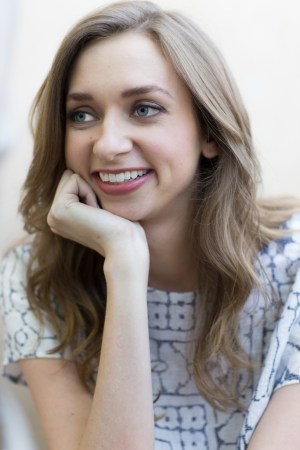 As is custom this time of year, the king of summer blockbusters is about to be crowned. Among the litany of contenders (“Mad Max,” the “Avengers” sequel, etc.), the bet on the undisputed winner is for “Jurassic World.” The film, which opens Friday, has all the makings of a summer blockbuster: a blend of budget, heart-pounding suspense and a Spielberg association.

In the latest incarnation, Jurassic World — the theme park conceived in the original — is up and running. It’s been operational for 10 years and attendance is flagging. In a desperate attempt to attract visitors, the park introduces a new “attraction,” a genetically modified, lab-created species of dinosaur and what do you know — Frankenstein bites back.

Lauren Lapkus, beloved by the legions of “Orange Is the New Black” fans for her role as gawky corrections officer Susan Fischer, is cast in the latest Jurassic installment. WWD chatted with her about being a part of the thrill ride.

WWD: How does it feel to be part of such an iconic franchise?

Lauren Lapkus: It’s insane, insanely cool. It’s one of the first movies I remember from my childhood as being really impactful. I remember how scary it was because it felt so real. It still does feel so real. I rewatched it a year or so ago at one of those Hollywood cemetery movie things and it’s just incredible how ahead of its time it is. Like visually, it still stands up even though it was made 20 years ago. It’s one of those movies you can watch over and over again.

WWD: Did you audition for the role or had the casting agents seen “Orange Is the New Black”…?

L.L.: It was a regular audition. I got a few pages from the script that were pretty vague, specifically vague so I couldn’t tell what the role would be. They didn’t want any details or plot points from the movie leaking. I just went with it. When I found out I booked it, I was literally jumping up and down screaming.

WWD: Tell me your role.

L.L.: I’m not sure how much I’m allowed to say at this point. Let’s just say I work in the park. There’s not a lot of physicality to the role but there are definitely heightened emotions. I will say it’s very suspenseful. Sorry I can’t say anything more specific. I don’t want spoilers!

[A brief description was e-mailed by her rep after they got permission from the studio. Lauren plays “an engineer named Vivian who works alongside Jake [Johnson]’s character, Lowery, running the control room at Jurassic World. They are supervised by Bryce [Dallas Howard]’s character, Claire the operations manager, and have to step up to the plate when all hell breaks loose.”]

WWD: This movie has summer blockbuster written all over it. Were you at all taken aback by the sheer scale of the set and the production?

L.L.: Yeah, every set piece was perfectly made down to the smallest of small detail. Like, even things that the audience won’t be able to see are perfect. Everything in the park is branded down to the smallest degree. Walking on set for the first time was nuts. I was totally blown away.

WWD: What was it like working with Colin Trevorrow? It’s shocking they hired a newish director for this.

L.L.: Yeah, this is his first huge movie for sure. He was great. He never seemed nervous or stressed. He was always in control. I’m in a supportive role, but he gave each actor time to talk about their character and to improvise in certain scenes and do stuff that’s not necessarily on the page. It was really fun.