Soprano Layla Claire has been more than a little busy recently — in fact, she’s had to learn three new roles this year. 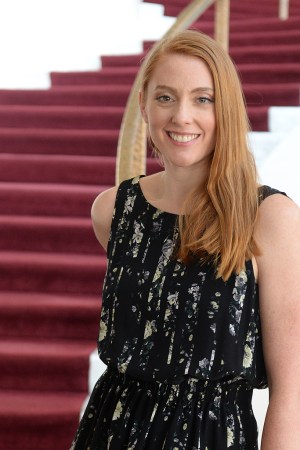 Soprano Layla Claire has been more than a little busy recently — in fact, she’s had to learn three new roles this year, including the part of Anne Trulove in the Metropolitan Opera’s version of Igor Stravinsky’s “The Rake’s Progress,” which will open at Lincoln Center on Friday.

On this day, she is wearing a printed Club Monaco dress that flatters her coloring — Claire is a member of a rare breed, the redhead who retains the vibrant color of her hair into adulthood. “My mother used to say, ‘You don’t like it now, but you’ll be sorry when it’s gone,’” she observes. But it’s still there.

Her three new parts, which she considers “dream roles,” are the Governess in “The Turn of the Screw” in Zurich; Blanche in “Dialogue of the Carmelites,” in Washington, and now Anne Trulove. Critics praise her big voice and clean sound.

Claire, now 33, divides her free time between British Columbia — where she grew up and her family lives — and Berlin, where her boyfriend, American baritone John Chest, is based. “I call him my zen master,” she says of the latter. “He keeps me calm.” The soprano, who is tall and slender, is very careful with her health and her voice, including watching what she eats when she goes out to dinner and doing yoga daily at Yoga Pure in New York.

She has four brothers, all older, and while she says they don’t really understand what she does, one name does resonate with them. “Everybody ‘gets’ The Met,” she says. “They’re very proud of me.” Although her parents are creative — her father was a drummer and her mother an artist — they were not tuned in to opera. Her favorite opera singers growing up were Luciano Pavarotti, since the only opera record her mother had was one of his — she used to hush the family when it was played — and Kiri Te Kanawa, whom she first saw perform in a Christmas special on television. Years later, as a member of the Lindemann Young Artists Program at the Met, she was able to meet Te Kanawa and work with her.

Claire travels a great deal for work and recently had a rather nightmarish situation develop when her suitcase — which contained her performing clothes, dresses, shoes and her fine jewelry collection — disappeared for an extended period. She had finally felt that she had put together a collection of jewelry that she liked. When the suitcase resurfaced, her clothes were there, but not her shoes and jewelry. “It was expensive, but also annoying,” she says. In addition, the insurance company has been dragging its feet about reimbursing her, and she has decided to leave the problem until her schedule is less hectic. She favors clothes from Club Monaco, because they are not expensive, but the fabrics are good. She has yet to find shoes that work well for her, something that’s a bit complicated by the fact that she broke her foot several years ago.

The singer attended the University of Montreal, then the Curtis Institute. After acquiring two master’s degrees, she became part of the Young Artist Development Program at the Met. She recently spoke to students at the university in Montreal. “It was a chance to see how far I had come,” she says. “It was a nice moment.”

One avenue she hasn’t explored yet much is recording, because, she says, like most opera singers, her schedule is determined so far in advance — as much as three, four or five years. When an opportunity comes up, she has to say, “‘I’d love to, but I’m booked doing blah, blah, blah.’”