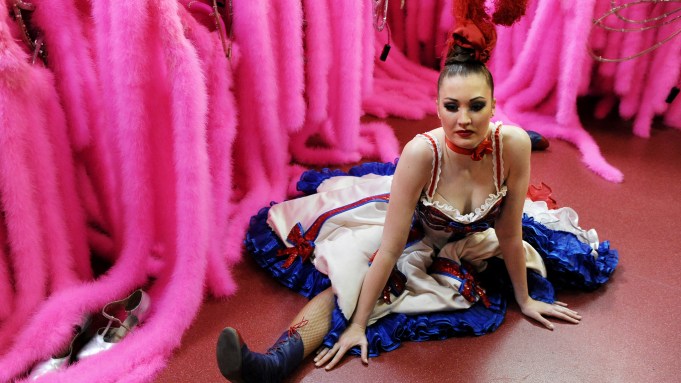 Henri de Toulouse-Lautrec found its dancers inspiring and frequently sketched and painted there, and his paintings were shown there. His posters for the nightclub have had enormous staying power. The venue helped make the names of La Goulue, Jane Avril, Mistinguett, Maurice Chevalier, Edith Piaf and Yves Montand. It’s the Valhalla of the cancan, with its high kicks and splits, though even when it was first opened, that dance, originally performed in 1830, was no longer cutting edge.

It’s Le Moulin Rouge, of course, the nightclub with the red windmill on its roof, which has been operating in Paris’ Montmartre since 1889. It was the first club in the world to use electricity to light a performance.

Now, for the first time in the club’s long history, its dancers are coming to the United States, to appear at the “Best of France” festival in Times Square on Saturday and Sunday. Their appearance is meant to mark the 150th anniversary of France’s gift of the Statue of Liberty to the U.S. — although one can’t really see Lady Liberty doing the can-can.

One part symbol of Belle Epoque bohemia, one part tourist attraction, Le Moulin Rouge with a staff of 450 people is the largest consumer of Champagne in the world, with 240,000 bottles drained each year. Its artistic director and ballet mistress Janet Pharaoh says, “We call it showgirl juice.” The club has set several Guinness World Records, among them one for high kicks — 720 in 30 seconds by a line of 30 dancers.

As for the style of the shows, as Pharaoh puts it, “People want to see beautiful things, but elegant and glamorous. We all want to be glamorous and elegant, but not over the top, just larger than life.”

Pharaoh, a slender, stylish brunette from Leeds, England, spent 17 years as a showgirl at the nightclub and became a dance captain on the way to her current position. She says that she was always interested in choreography and in every detail of how the show worked. While the dancers perform to Offenbach’s famous version of the cancan, the “Galop Infernal” from “Orpheus in the Underworld” of 1858, each show also has music written specifically for it.

Beginning in 1985, Chanel rescued 11 small businesses that supplied specific elements to the couture, including embroiderers Lesage, glovemakers Causse, and Longon, creators of pleats, which all became part of its Paraffection group. Chanel had realized that, if these specialized firms were allowed to disappear, so would their matchless knowledge and skills. Pharaoh says that Le Moulin Rouge works with Lesage to create embroidery for its costumes. Embroidery from India, now a major supplier of this type of handwork, Pharaoh notes, is “just not the same.”

The nightclub also felt that it had to step in and come to the aid of two of its own key suppliers, feather specialists Maison Fevrier and shoemaker Maison Clairvoy. That was because it needed a steady supply of the right sort of shoes — 60 dancers doing many highly athletic routines a night, with changes of costume, use 800 pairs each evening — and the demand for plumes for dancers’ costumes is obviously great. Rhinestones and Swarovski crystals are also key.

Asked about the signature looks of some of the nightclub’s most noted performers, Pharaoh says, “La Goulue [“the glutton,” in French], her style was very free in a way, after all she was really the one who got the cancan going. It was part of the liberation of women to show her legs. I think she was a very, very strong personality; she had her signature dress, black silk with white broderie anglais and a very, very noticeable red blouse with white spots on, the kind of outfit you would see straightaway, especially with her bright orange hair. Moving on to 1930, Mistinguett was also a lady of very strong character, but with a very feminine side. She was about drama, beautiful gowns with short hair, a little bit tomboyish, but wearing all these feathers and jewelry.”

One of her favorite costumes in the current production is “a large costume that’s in the prologue, with a lovely red ostrich-feather bow. When you can see the legs and the beautiful skirts, it’s quite magical, it’s an ‘Ooh-ah’ moment.”

Pharaoh has high standards for her showgirls, and she travels on casting calls all over the world — Australia, Canada, Scandinavia, the U.S. and England, including to her hometown of Leeds.

“We’re very particular,” she says, “because of the costumes, we need the girl to be five-foot-eight, five-foot-nine, great bodies, need good dance training and a great personality. I am basically looking for everything.”