Leave It to Diva

Though she is performing scenes from three of her most acclaimed roles at the opening gala of the Metropolitan Opera on Sept. 22, Renee Fleming seems worried... 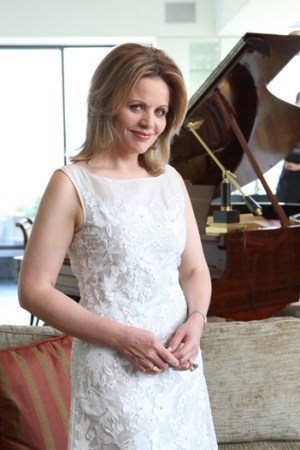 Though she is performing scenes from three of her most acclaimed roles — Violetta in Verdi’s “La Traviata,” the Countess in Richard Strauss’ “Capriccio” and the title heroine in Massenet’s “Manon” — at the opening gala of the Metropolitan Opera on Sept. 22, Renee Fleming seems to be worried that her singing may not, in fact, be the most glittering element of the evening.

“I’m really hoping very much that I’m not completely upstaged by the costumes,” she says. “I’m going to practice hard in the next few weeks to try to hold my own.”

Fleming is exaggerating, of course — just two weeks ago she was awarded the Polar Prize, music’s equivalent of the Nobel, alongside Pink Floyd in Stockholm — but there’s a good reason for her nerves, given the designers behind those costumes.  Karl Lagerfeld, Christian Lacroix and John Galliano each crafted gowns for one of the three parts (in Lacroix’s case, there are two dresses, since he designed for the role of Violetta, which Fleming will perform in two different scenes).

“‘Authenticity’ is the catchword for costume designers in opera,” says Fleming, whose Coty fragrance La Voce will be launched at the gala, “but these three designers were given a bit more leeway, and were able to represent the existing production with a modern touch, or something not necessarily fitting in with the period.”

Describing the outfits while sitting in an office just outside the Met stage, where she has performed 18 of the 51 roles of her career, Fleming, 49, leans forward, blue eyes widening (she does not consider herself a fashion-oriented person, though it’s worth noting that a Miu Miu bag rests at her feet).

“The Lacroix costumes are just extraordinarily feminine, the first one is very ethereal, all hand-painted chiffons,” she says, adding that Lacroix traveled to Vienna, where Fleming was performing over the summer, for the fittings of both gowns, the second of which features such “a ridiculous train, I’m going to have to have an army of people behind me.”

Construction, as always, was also important to making the gowns wearable. “Lacroix does corsets which are incredible,” she says. “I’m certainly used to wearing corsets, but these are light and strong.”

For Manon, who is often portrayed as over-the-top in the scene Fleming will perform, Lagerfeld went a more subtle route, creating a matte gray silk and black lace gown that the singer, who performed for the designer at a 2005 Met gala, calls “quintessentially Chanel,” complete with black velvet ribbon.

Though she had little input into the inspiration and creation of the dresses, Fleming has become something of an expert on what’s necessary to making them work — the ability to breathe and get around. “There are a lot of requirements for opera that don’t exist even for the concert stage,” she says. “I have to be able to move, and kneel, and run, and not get caught in the furniture.  It’s theatrical.  All these needs have to be met.”

It was, however, Galliano’s dress that seems to have surprised Fleming the most (the designer has created costumes for her twice before). “That dress is Art Deco, because the existing [“Capriccio”] production was a Twenties one,” she says, “and Galliano really designed against type, against what one would expect of him. It’s very much Poiret-inspired, a very simple black sheath. Superelegant, rich, very expensive-looking. That’s the thing I keep saying, that it looks really expensive!”

Growing up in Rochester, N.Y., Fleming didn’t fantasize about swanning around the stage in couture; in fact, she claims fame, which crept up gradually as she globe-hopped to countless cities throughout the Nineties, came as a surprise. “I never envisioned myself being a star or anything, or even achieving this,” Fleming says, motioning out the door, where an enormous chandelier is being hoisted above the Met’s lobby.

During her years at Juilliard she lived in Washington Heights (“It was the mid-Eighties, not a good time”) and then Astoria, Queens, with her former husband, Rick Ross, with whom she has two teenage daughters, Amelia and Sage. Pushed to achieve early on by her parents, both music teachers, Fleming was naïve about the rigors of being a performing artist — particularly in a field with such a limited audience as opera — and it served her well.

“When you’re young, you’re ignorant,” she jokes, adding that being driven by both a need to succeed and “a little voice that says, ‘Yeah, but I’m never good enough’” motivated her “to keep working, working, working, up, up, up. Striving.”

In her 2004 autobiography, “The Inner Voice,” Fleming wrote with candor — and surprising eloquence — about overcoming terrible stage fright and insecurities about her talent in an attempt to “spell out for young people” what the business is really like (“You have to have a thick skin and an ability to be exhausted a lot,” she says dryly.)

It turns out the book was written with her close friend Ann Patchett, whose 2002 novel, “Bel Canto,” chronicled the kidnapping of a group of dinner-party guests in South America, including an American soprano.  Patchett listened to Fleming’s music while writing the novel, but the pair didn’t become friends until after it was published.

“All the beautiful parts of my book, that’s all Ann,” Fleming says.  And the performance anxieties she writes about aren’t exactly in the past tense.  “I saw ‘Tropic Thunder’ the other day with the kids, and it’s so much about insecure actors, and [singers are] exactly the same,” she laughs. “But with us, there’s also the element of this instrument having a life of its own, and walking out onstage and thinking, well, this may be the night when I can’t sing the high C. Or that it cracks, or that I’m humiliated! It’s almost like being an athlete in the sense that your body has to perform at a high level. It’s not just an artistic expression, it’s also a physical one.”

Now arguably the world’s most famous soprano, Fleming has stopped leaping at requests to take on well-known roles, preferring to commission new works (a habit that has made her many fans among classical musicians) and do concerts, though she will be headlining “Thais” at the Met in December. “The good thing at this point is that I don’t need to take any risks,” she explains. “You need to do it when you’re building and when you’re introducing yourself to the world, it’s what brings attention to you, but at this point it’s not necessary, and frankly…[I’m] less interested in learning a whole bunch of new opera repertoire.”

Which isn’t to say Fleming’s drive has waned. “Ambition, especially applied to women, has a negative connotation,” she says.  “It implies that you’re willing to step on other people, which is definitely not the truth. It’s perceived as unfeminine. We’re supposed to say, ‘Oh, it just happened to me. I’m so lucky.’”

As Fleming sees it, the onus is on her to push her profession into the mainstream music spotlight that “American Idol” clicked on; opera, after all, is its own kind of luxury market, with big spenders in the audience night after night, but not so many twentysomethings. Which may be why she loves YouTube: “People can explore it without the intimidation of buying a ticket and going to the Met for the first time, you know? Even though that’s great and they should do that, but people get anxious about that.”

She is also quietly taking her cues from other divas of their industry by working towards that “Inc.” at the end of her name. She has put her stamp of approval on a dessert (“La Diva Renee,” created by Daniel Boulud) and a porcelain iris by Boehm and now the fragrance, which leads to the inevitable question: Will there be a clothing line — corsets de la Fleming, perhaps? “Honestly, I’ve never thought about that,” she says carefully.  “I am not a household name…but you never know. It’s just not something I expect to come my way.”