Blondie, blondes and a former blonde were all in attendance to support the Swarovski Fashion Rocks event in Monaco. 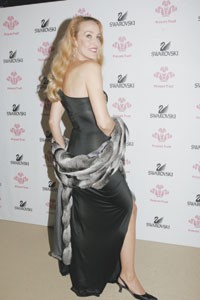 MONACO — Rolf Snoeren, half of Dutch design duo Viktor & Rolf, looked more like the rocker Skin than Blondie at Swarovski Fashion Rocks here Monday night: The blonde locks he introduced during Paris Fashion Week were shorn off. “It was an experiment that didn’t go so well,” Snoeren confessed as he filed into the Grimaldi Forum for the fund-raiser for the Prince’s Trust, Prince Charles‘ youth charity.

Still, the event seemed to be a tale of the blondes, what with Donatella Versace scoring Mariah Carey for her segment, co-host Jerry Hall changing frocks every 10 minutes and a certain Deborah Harry all but stealing the night with an electrifying set. “She’s the real deal,” Burberry design director Christopher Bailey said of Harry. “I heard her during rehearsals and I was like, ‘Wow!’ Her voice is amazing.”

Brooke de Ocampo also was moved by Blondie’s performance — to a point. “I would have stood up and danced if I weren’t half naked,” she said, referring to her see-through Prada dress.

“This is the night all designers get to be rock stars,” declared Tommy Hilfiger, turning around to show the crystal Rolling Stone “lips” logo encrusted on the back of his velvet jacket. Alas, Mick Jagger and company weren’t on the lineup, but co-host Jeremy Irons, who sparred with Hall throughout the evening, asked her: “Couldn’t you persuade one of your exes to perform?” Hall replied dryly, “Which one?”

As for Jagger, the answer was clearly no. “Have you seen how many models there are backstage?” Hall asked Irons. “Even he couldn’t afford the child support payments.”

The event, which paired 11 musical stars and fashion designers, was a good-natured affair, with Giorgio Armani getting up from the table and serving water to Amerie and his other guests and His Serene Highness Prince Albert II clearly bemused by Sharon Osbourne‘s royal sales pitch for her eligible daughter, Kelly. “She comes with a huge bank account, a couple of camels and a donkey,” she promised.

Later, at the dinner, Prince Albert first greeted Ozzy Osbourne and then, turning to Sharon, said, “Ah, and this is the mother-in-law.”