Waithe, who was in London to learn more about upcycling from Christopher Raeburn and Mercedes-Benz, is plotting a new documentary on sneaker heads and her first feature film ""Queen & Slim."

“It’s important to continue to be visible, continue to show my face and continue to tell people that you can be out and proud and live a very happy and successful life. Anything I’m involved in is going to speak to how different I am and what I bring to the table with my voice,” said Waithe, who is known for being a loud advocate for LGBTQ rights through her film and television work.

Earlier this week she took on London in time for London Fashion Week Men’s, to try her hand at designing, too. As part of an initiative by Mercedes-Benz, which aims to bring together a variety of creatives and to encourage them to learn a new skill, she joined forces with London-based designers Christopher Raeburn and Duran Lantink, who taught her about the concept of upcycling in Raeburn’s East London studio and helped her upcycle a Mercedes-Benz Formula 1 and Formula E uniforms into a custom jacket.

“What Chris and Duran are doing is in a way reinventing the way we look at fashion, the way we look at our closet and encouraging us to look at our wardrobes and see so much possibility instead of just think ‘I have nothing to wear,'” said Waithe, a self-proclaimed vintage aficionado and passionate sneaker head.

Waithe is aware of the unhealthy culture in the sneaker community and the never-ending overflow of products that is constantly marketed onto consumers. 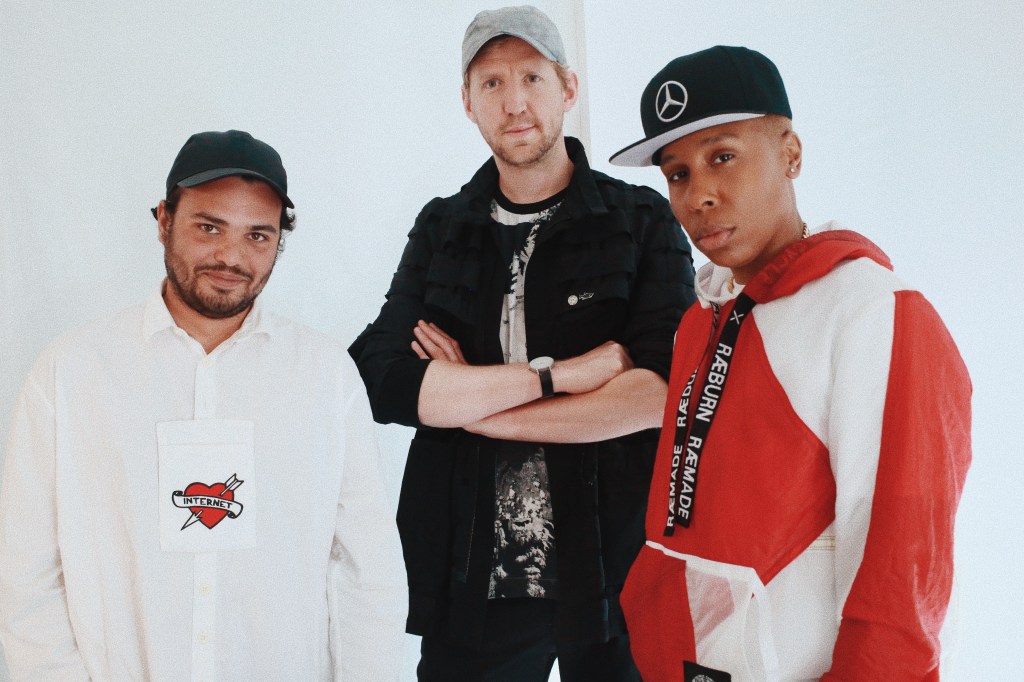 “I try to follow it all on YouTube and one thing people are saying is that they’re sick of brands dropping the same sneaker every week. It’s almost become like an abusive relationship,” she said, adding that she doesn’t see demand waning any time soon.

She even goes as far as to accept responsibility: “The irony of it all is that these brands are sending me new products because I’m someone who is deemed an influencer, they get free publicity if I post the shoes I’m wearing and kids on Instagram see it. So I’m part of the problem, too, but I’m also very fascinated by how the whole machine works.”

The dynamics of the sneaker culture will be the subject of a new documentary Waithe is cooking up. It will feature the leaders of the hypebeast tribes — think Pharrell, Virgil Abloh and Kanye West — as much as the kids waiting in line to buy the latest drops.

“I’m more intrigued with the people waiting in lines and spending their last dollar on an Off-White sneaker or the latest merch by Travis Scott. I want to talk to them and that’s what the whole documentary will capture. Why is there such a desire to own the latest and greatest? My question is, what does it do to someone’s life in the long term?” added Waithe. “There are opportunities for people to be saving and building wealth but they’d rather be the cool kid or the person that has the latest thing — that’s what we want to get to the root of.”

Apart from the latest sneaker, Waithe loves a fashion statement too and recently she made headlines when she appeared at the Met Gala in a striped Pyer Moss suit with the slogan “Black Drag Queens Invented Camp” emblazoned at the back. 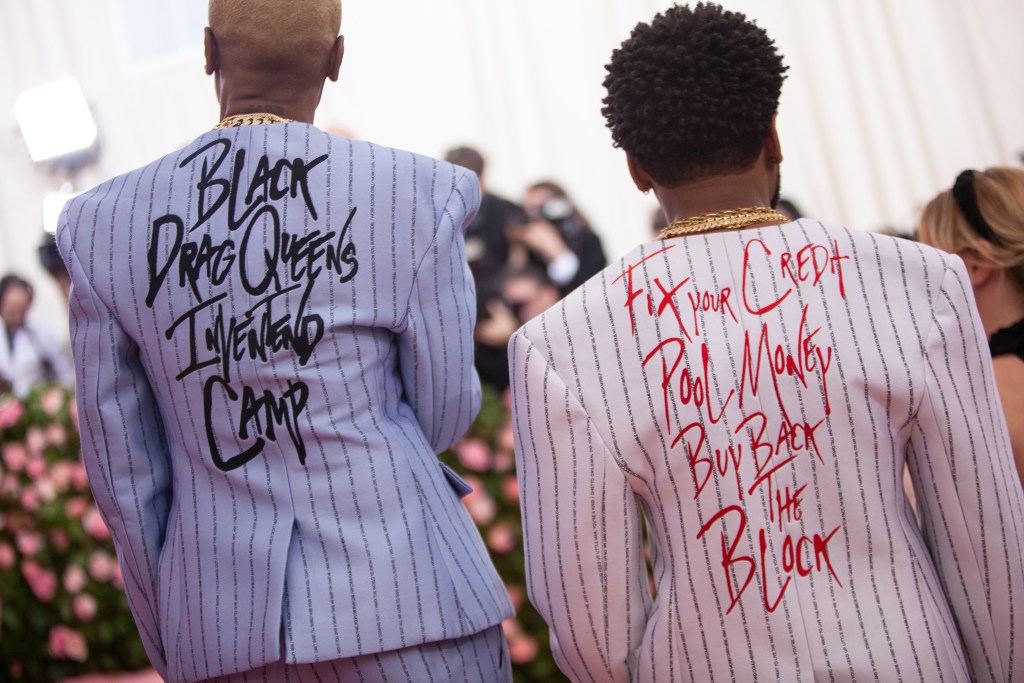 “My first time at the Met was a hard act to follow with the rainbow cape, but this year was just phenomenal. My hope is to keep getting invited back and to be able to track where I am in life each time I go,” said Waithe, pointing to how much thought she put into every detail on the suit, from buttons featuring gay and queer icons like RuPaul, to the lyrics of songs that speak to gay empowerment, like Diana Ross’ “I’m coming out” on every single stripe.

“When I think about camp I can’t help but think of black drag queens, ‘Paris Is Burning’ and the impact they’ve had on our culture as a whole.”

Next up for Waithe? Celebrating Pride, for which she created a special playlist on Spotify and contributed to the making of virtual monument Stonewall Forever, which commemorates 50 years of Pride.

“This is our second time working together and we just really have a unique chemistry and bond, which we both really respect and try to protect,” said Waithe, who previously worked with Matsoukas on the Netflix series “Master of None” that won her an Emmy.

“That definitely changed everything. It put me in a different weight class and I think it made the industry pay a bit more attention. Once I had the attention, I wanted to make sure I did something with it and I decided to produce more, to put out a lot more work, show people what I was made of and help usher more artists through the door,” she added.

She will also be documenting this experience of working in Hollywood as a young, queer black woman in an upcoming television series with Entertainment Tonight. “It will be the first time a queer black woman will be the lead of a primetime show and it’s me in my twenties with my two straight best friends, chasing a dream and also trying to chase our identity while living in Los Angeles.” 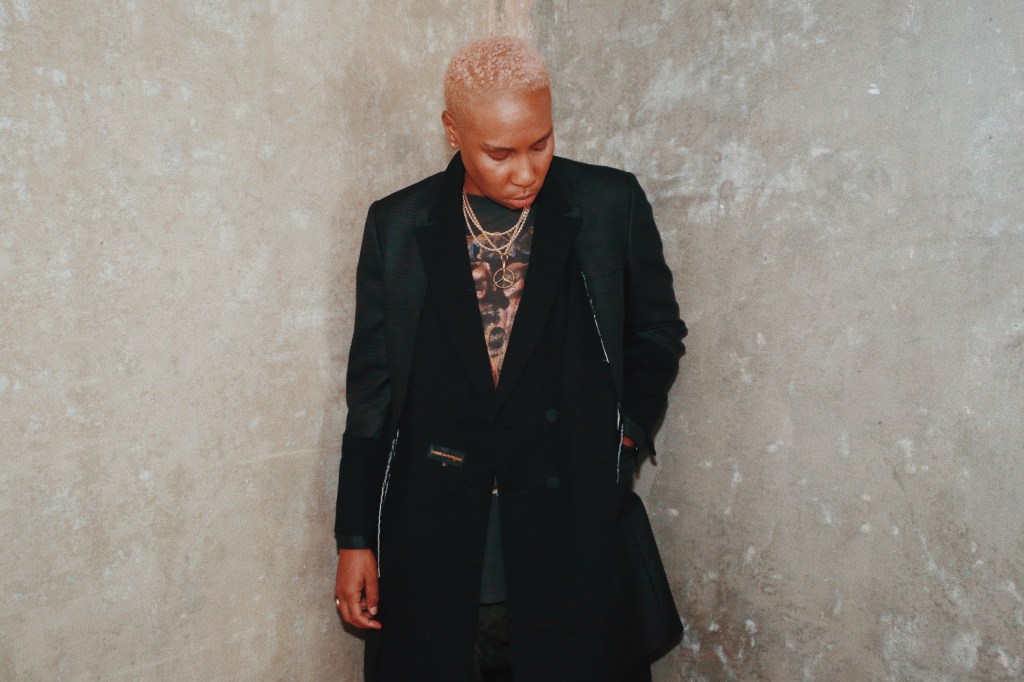 Lena Waithe in an upcycled garment by Duran Lantink.  Courtesy of Mercedes-Benz