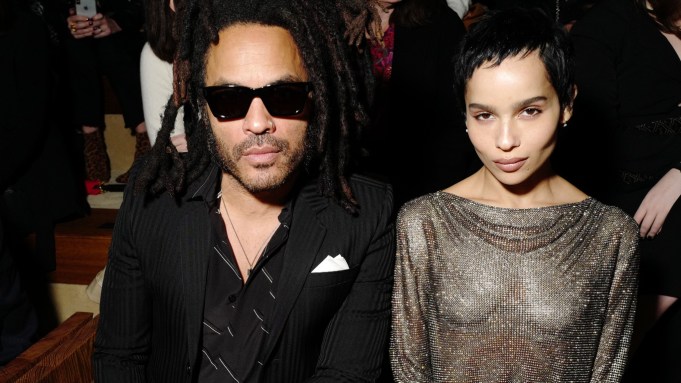 IRON LADY: It has become a tradition for the Saint Laurent show to be held in front of the Eiffel Tower. What’s not as usual are the sacred Eiffel Tower lights coming on later than planned.

“I got stuck in traffic and was late to a Saint Laurent show once,” said musician Lenny Kravitz, sitting front row with his daughter Zoë Kravitz, who was taking a break from filming “The Batman” in London.

The shows are usually held at 8 p.m., timed with the Eiffel Tower’s sparkling illuminations. These magical lights are turned on for five minutes every hour from sundown to 1 a.m.

“As they were waiting for me to get to the show, they couldn’t turn the lights on until I was in my seat,” said Lenny Kravitz, who is gearing up for a worldwide tour, starting with dates in Australia and New Zealand in a month. “I literally held the Eiffel Tower lights up.”

“I remember a particular scene in ‘Emily in Paris,’ the TV show I’ve just wrapped,” Collins said, referencing “Sex and the City” creator Darren Star’s new show. “We got to film right at the foot of the Eiffel Tower, and the whole area was cleared out for us. It was quite a moment.”

What is she planning on doing in Paris with all her spare time? “I love going to the Musée de l’Orangerie and stare at the Monets,” she said.