Meet Léon, the 23-year-old Swedish pop singer with a cello background who is beloved by Katy Perry. 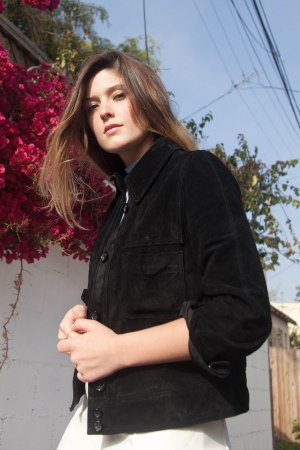 “I was with my family at my summer house and my manager was like, ‘Katy Perry tweeted about you,’” says 23-year-old Swedish pop singer Léon, over the phone from the backseat of a car, freshly landed in New York. “And I was like, ‘Wait a minute.’”

Léon, who released her music video for her hit single “Tired of Talking” on Thursday, has amassed 24 million worldwide streams on Spotify (the Perry fans are powerful). She’s just wrapped her first tour, playing in L.A., New York, San Francisco and Toronto. “This is my first experience with touring,” she says. “Before this I had another band and I just love performing because that’s where I feel like I can just be. So to me it’s just a very new experience to travel and play. The touring part is very new.”

Before creating a solo EP, which she released on Spotify and which subsequently caught the attention of Columbia, where she is now signed, she had a jazz, soul and hip-hop band with about 10 friends. “We just played around at different venues in Stockholm but then I just felt that I wanted to do my solo thing, so yeah,” she says with an adorable nonchalance.

Since creating a solo sound as Léon, she’s been claimed more as a pop artist — but she argues that a more soulful influence is in the music’s roots. “Definitely, I love jazz, I love old Motown, and I get so much inspiration from writing my own songs.” she says. “Etta James and Sam Cooke and Stevie Wonder…jazz definitely influenced me as to how you can use your voice.”

She was born and raised in Stockholm, where she stills keeps an apartment, though as it goes for a pop star on the rise, she mostly finds herself in L.A. these days. While pop is where she’s making a name for herself, she grew up surrounded by classical music and played the cello for almost 15 years. “My father is a classical composer, my mom is a classical cellist, my sister does classical music, my uncle plays the violin,” she says. “I’m the only one who does pop things in my family.”

She’s keeping it in the family on her record: her mother and uncle will play on a few songs on her upcoming album. “My mom was like, ‘You have to take us along, you have to have us on a song,’” she says. But Léon insists the crossover stops there. “Of course they’ve inspired me, but we do such different things,” she says. “When I come over to their house I just play a new song and they’ll say, ‘Oh that’s good’ or, ‘Oh I don’t like that one.’”

The ones that they approved of, presumably, will be on her debut album, out in September. The music, entirely self-penned, is heartbreak-themed. “I had my fair share of experiencing heartbreak,” she says. “It’s kind of me really getting closure for the last time. So I would say definitely it’s my break-up anthem.”

Now that the music is written, she’s having a hard time keeping it to herself. “I can’t wait until it’s out,” she says. “I just want to play live and tour, because now I got a taste of it and I’m like, ‘I want to do this every day.’”