The event venue founded by Space Age designer and French entrepreneur Pierre Cardin is closing its doors on March 30. 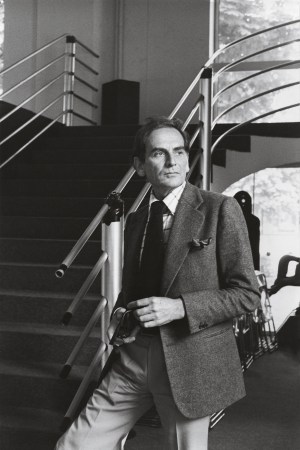 PARIS — It was a bittersweet night for L’Espace Cardin here Monday.

The venue, which has hosted performers as diverse as Marlene Dietrich, Alice Cooper and prima ballerina Maya Plisetskaya, was celebrating its 45th anniversary with a new tome written by Jean-Pascal Hesse — and mourning its permanent closure.

“The city of Paris is shutting down two theaters [the Théâtre du Châtelet and Théâtre de la Ville] for works,” explained Pierre Cardin, the Space Age designer and French entrepreneur who founded the venue in 1970. “They need to update the security measures, build elevators and such, and so they decided not to renew our lease and take back the premises, as they need space to accommodate the shows,” he said, adding: “I am a little sad.”

Hesse, longtime Cardin collaborator, enthused about the venue’s legacy and pioneer spirit. “What I didn’t know before writing the book is how many shows have taken place here — we are talking about more than 450 events. This has not just been a theater, but a cinema, an exhibition space and a restaurant — a unique concept at the time it was founded,” he said.

The 160-page tome, published by Editions Gourcuff Gradenigo, features 130 illustrations as well as a foreword by actor Gérard Depardieu, who saw his international career kick off here following his now legendary performance in Peter Handke’s “The Ride across Lake Constance,” which also starred Jeanne Moreau and Michael Lonsdale.

“One night, they tell me Bernardo Bertolucci is in the audience,” the actor recalled. “I didn’t know Italian cinema very well. Names like Fellini, Visconti — I try to catch up, but it’s not easy. After the show, he comes to see me. He is very charming. He talks to me about the play and then about the movie he is preparing: ‘1900.'” Depardieu famously ended up playing the leading role in Bertolucci’s epic drama — next to Robert De Niro. “It was that very night that my career took off,” he said.

Cardin said the Handke play, Bob Wilson’s “Deafman Glance” and a Soviet rock opera from the Eighties called “Junon and Avos” rank among his favorite performances. “’Junon and Avos’ was exceptional. This was during the Cold War, and we managed to reunite the Russian and the American actors at an event on the Place de la Concorde. It was extraordinary,” he said.

The book lifts the veil on the action behind-the-scenes, recounting how an exasperated Cardin finally capitulated to the long list of requests from Dietrich, the eternal diva, who does not content herself with the 300 roses offered by the designer. She also demanded bottles of France’s best Champagne in her dressing room, a separate space between her and the orchestra and only tulle made in England for her costumes, among other “crazy” treats, the tome recounts.

L’Espace Cardin’s final curtain is slated to fall on March 30, with a musical adaptation of “The Portrait of Dorian Gray.”