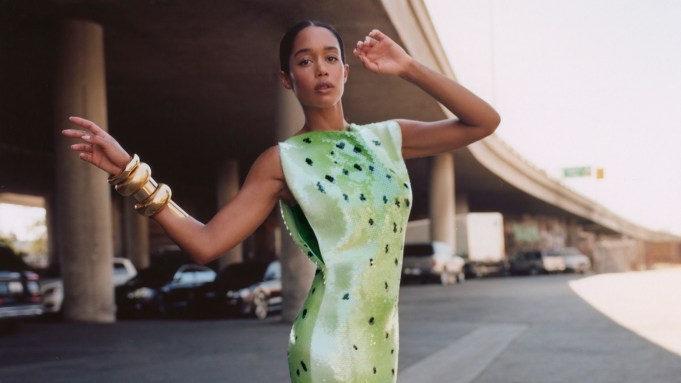 How’s this for a strange coincidence: Six months prior to learning about the existence of what would become her latest project — the Hulu series “Mike” — Laura Harrier was in Paris having martinis with writer Jeremy O. Harris when, suddenly, Harris made a prediction.

She laughed it off and went back to her martini. But a few months later there came a script for her, with that very role.

“So I give props to Jeremy O. Harris because I feel like he predicted this,” she says.

Chatting with Harrier feels like talking to a seasoned Hollywood pro, and not only because she casually meets the industry’s most in-demand for cocktails in Paris. Harrier has a wise-beyond-her-years quality that reminds you she hasn’t been famous for all that long and a casualness that is refreshing and increasingly hard to come by in today’s influencer landscape.

She’s sitting in the lobby bar of The Hotel Chelsea in New York, fresh in from the Venice Film Festival, where she attended a dinner with Saint Laurent and took in the premiere of “The Whale” (and got a few mosquito bites on her legs, the price to pay for one of Anthony Vaccarello’s enviable minis). Fresh-faced and dressed casually in Birkenstocks, cargo pants and a black baby T-shirt, it’s clear the art of the model-off-duty look hasn’t been lost since she made the transition into acting more than a decade ago.

In the years since she broke out, in 2017’s “Spider-Man: Homecoming,” Harrier has become one to watch both on screen and on the red carpet, known for her keen fashion sense and discerning taste in roles. This fall she can be seen in Hulu’s “Mike” series about the life of legendary boxer Mike Tyson, as well as “Entergalactic,” an animated series from Kid Cudi that accompanies his new album.

In “Mike,” she plays the actress Givens, who broke out in her role on the ’80s sitcom “Head of the Class” and who was married to Tyson in 1988, filing for divorce later that year. Givens cited physical abuse as cause and was publicly villainized for it for years.

“I was really interested in the narrative that was around her and Mike’s relationship and the narrative that was around her as a woman, and the way that she was completely villainized through this relationship,” Harrier says. “It felt very crazy to me seeing it and going back and doing research and reading articles, how instantly she was labeled a gold digger and all of a sudden she’s just after his money and she’s lying about the abuse. Looking at it through the lens of 2022 and after the #MeToo movement, it’s really shocking to see, to be honest. He was the hero and everybody loved him. And people really hated her, and I just felt like that was really unfair.”

When “Mike” came her way, she was interested in trying something new, and bringing humanity to Givens, someone who’d been “publicly demonized” felt like a worthwhile challenge.

“Nobody’s all good and all bad, right?” Harrier asks. “And that’s what makes people interesting is finding those balances and good people who do bad things, bad people who do good things. Making somebody human is what’s so cool about acting to me and creating characters. This just sort of felt like a new challenge in that way, and I wanted to give justice to her story as well.”

Harrier’s arrival into Hollywood is more a rarity these days, in the age of the Nepo Baby and the Disney darlings turned Netflix stars. She didn’t start acting until she was in her early 20s, living in New York and working as a model.

“I didn’t know that that was a thing you could grow up and do,” Harrier says of acting. “It was very far away from everything I grew up around.”

Looking back, she supposes she can see the laying of the groundwork, given her love of putting on plays for her family and having the family video camera trained on her. But growing up in Chicago she didn’t know anyone who was a performer. When she was 17, she was scouted and moved to New York to work as a model, but eventually found that unfulfilling and pivoted into acting. After a few small roles, she enrolled in acting school and, after graduating, began to get a series TV and film parts. But she didn’t really burst onto the Hollywood scene in a big way until “Spider-Man: Homecoming.”

“I feel I was able to have a very normal upbringing and was able to be anonymous into my 20s, which I think is nice. I had a whole life before being a public person. And I’m grateful for that for sure,” Harrier says. “Of course, I’m like, ‘oh, maybe I’d be further along if I started younger,’ but I think everybody has a different journey and some people have been doing this their whole life and then some people find it later. You can’t compare. So just however it’s supposed to happen [it happens] — I definitely believe in that.”

By the time she had the public’s interest on her, she’d already “done all that dumb stuff that you do as a teenager,” she says, and instead has just been able to enjoy all the success that’s come her way, with the confidence of someone who knows who she is.

“I mean, everybody handles that differently so I can’t say how I would’ve handled that had that happened at 16, but I was a bit older so it was fun,” she says of the attention that came with “Spider-Man.” “I mean, it’s just really an incredible thing to be a part of that; I’m still super grateful for it. Being in Marvel, in a movie on that level, it was just really fun, and it had really thrown me into the deep ends of that whole world instantly. Which, I don’t know, it was more comfortable than you would think. It wasn’t like, ‘Oh my god, I’m freaking out.’ I was like, ‘This is a fun journey. And I’m here for the ride.’”

In the vein of trying something completely new, Harrier will next be seen in “Entergalactic,” an animated TV special from Kid Cudi paired with his new upcoming album of the same name. The project is voiced by Cudi (Scott Mescudi), Jessica Williams, Timothée Chalamet, Vanessa Hudgens, Macaulay Culkin and more and premieres Sept. 30 on Netflix.

Harrier hadn’t met Mescudi prior to being tapped for the role, but soon after booking it went over to his house to listen to the album.

“He’s just such a creative and has such a unique brain and he’s such an interesting person. So this is really cool because I’ve never seen an album be so connected to something like this,” she says.

She’d love to work with the likes of Christopher Nolan and reunite with Steve McQueen, who gave her her first role in “Codes of Conduct,” or really anything that is outside of her comfort zone.

“I think with each project your goals sort of change. Like, ‘OK, I did that. That was amazing. What’s the next challenge? What’s the next thing? Do I never want to just repeat the same thing over and over?’” Harrier says. “Because if you’re not growing or learning like, what’s the point?”

On the horizon she’ll star in a reimagining of the classic film “White Men Can’t Jump,” alongside rapper Jack Harlow in his acting debut.

“It’s such a classic film. This is definitely influenced by the original, but I wouldn’t say it’s a remake. It’s such a classic, iconic movie, you can’t just remake it, and the filmmakers definitely knew that. So I think it’s more influenced by the original,” she says. “And I loved working with Jack. He’s so fun and he’s really good. It was his first time acting and I was really impressed by him.”

After the interview, Harrier will attend a selection of New York events, including the fashion show for cool-girl brand Khaite and events for The Attico and GQ, before heading to Milan and Paris, for more fashion commitments. Paris is becoming more and more of a second home these days, since Harrier has gotten engaged to her Paris-based fiancé. (She prefers not to mention him by name, but that’s what Google is for.)

What is your perfect Sunday?

“A great Sunday, I love to get up and it’s beautiful weather. Take my dog to the park, get a good coffee, maybe a bagel. If I’m in Europe, not a bagel. If I’m in Europe then I want a baguette with all the cheese and all the jams and all the stuff. A really good coffee. And then maybe go to a museum, see a good exhibition. Have dinner with friends. Nothing crazy. I don’t care. I just like good people, good things.”

“I mean, it’s either going out and dancing all night or staying on the couch and watching a movie. One of those two.”

What’s been a favorite weekend trip you’ve gone on?

“I’ve gone on little trips in Europe. I went to Norway for the weekend, which was really beautiful. It’s really nice. I do like being in a place where it’s an hour flight in Europe, in a totally different place. But in L.A., I love just going out to Malibu for the day and being at the beach and eating oysters. That’s really fun.”