With two Cannes premieres to her name, the actress has been in high demand this week. 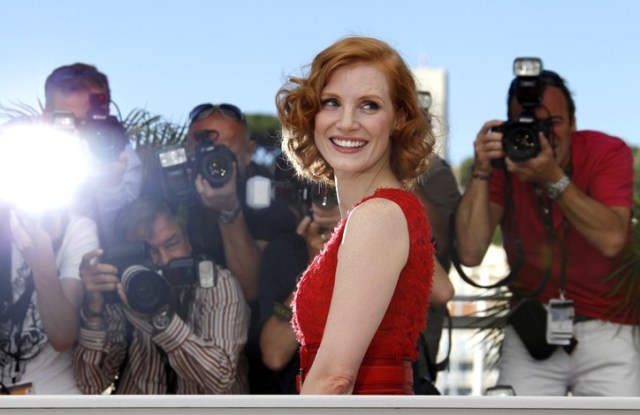 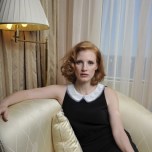 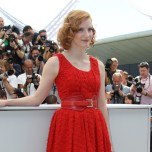 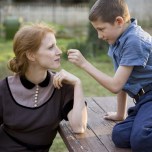 CANNES, France — “Where do you want me?” Jessica Chastain asks the photographer with a mischievous smile.

At least a dozen people watch as the redheaded actress, wearing a black Pucci dress with a beaded white collar, settles on a cream chaise lounge on the top floor of the Carlton hotel here and languidly switches poses for the shoot, which has been shoehorned into a busy afternoon of interviews. With two movies premiering at the Cannes film festival, all eyes are on Chastain as the hottest ticket in town.

The 30-year-old, who burst onto the scene in a 2006 theater production of Oscar Wilde’s “Salome,” opposite Al Pacino, has a slew of pictures coming out this year. They include “The Tree of Life,” directed by Terrence Malick and co-starring Brad Pitt and Sean Penn, which has been three years in the making. Within 24 hours of its screening here, it had become the most talked-about film of the festival and sharply divided critics with its quasi-mystical take on childhood and the mystery of man’s creation. One thing they were unanimous about was Chastain’s performance, which established her as one of Hollywood’s leading new talents.

The actress shudders as she describes walking up the steps of the Palais des Festivals the night before, dressed in a lemon yellow Zac Posen gown and Louis Vuitton fine jewelry.

“It was my first experience like that and it really was like diving in the deep end of a pool,” she recalls. “Honestly, my main feeling was that I was so grateful for Brad and Sean, because they each had one of my hands and I was shaking so much that they just really kept me steady, and they would whisper to me what we were about to do, like: ‘OK, we’re turning around, now we’re going to walk up the stairs.’ So they were really taking care of me.”

Chastain also got to experience the downside of film. Earlier that day, she sat beside Pitt as they faced the wrath of critics upset that the notoriously reclusive Malick, who has made only five feature films in almost four decades, failed to attend his own press conference.

“He’s never done press, so I don’t know why people imagined that he would,” she says. “He’s incredibly shy, and it makes me sad to think that someone might not understand that and have compassion for him because of that.”

Indeed, Chastain had nothing but praise for Malick, despite his reputation for compulsively rewriting scenes, sometimes even as he is filming them.

“It wasn’t difficult for me because I went to Juilliard, which is a theater training school, and I spent so many classes and hours doing the most ridiculous things, just, you know, pretending I was a bird,” she laughs. “Working with Terry, it was the same kind of thing. It’s a great lesson in just being open to what presents itself, and he would never change something just to show his will. The wonderful thing about him is he just reads the room, he reads what the energy is between two people and he tries to capture that.”

In the film, opening in U.S. theaters on May 27, Chastain and Pitt play a Fifties couple raising three boys with radically different approaches. She is the embodiment of grace, or spirituality, while his disciplinarian approach is all about the survival of the fittest. Malick gave his lead actress several tips on how to achieve the stillness central to the impressionistic feel of the film — a continuation of the meditative style already apparent in his 1973 feature debut, “Badlands.”

“He recommended that I look at some paintings of the Madonna at the Metropolitan Museum of Art, so I was there for hours just staring at these images,” she recalls.

Malick also suggested she watch Lauren Bacall films to capture the slower diction of the era.

“I went to a spiritual retreat for a week and meditated every day in these sweat lodges,” she says. “I did everything I could that would slow me down and create a type of stillness and surrender, and then I showed up to set.”

A fan of cerebral actresses like Isabelle Huppert, Chastain describes being in Cannes as “a dream come true.” She isn’t averse to the glamour side of the business either.

“I love fashion so much, for the same reason I love costumes,” she says. “To me, what you wear is a reflection of how you feel at that moment. Today, maybe I chose this dress because I was feeling very calm and I felt like this had the simplicity that represented how I felt on the inside, and last night, I was really happy that people were finally going to see the movie and I felt like wearing sunshine.”

Perhaps the key to her success lies in her ability to portray both the glamour-puss — her upcoming role as Celia Foote in “The Help” requires her to channel a Monroesque sexuality — and more contained roles. In “Take Shelter,” presented out of competition in the Critics’ Week section at Cannes, she plays a wife and mother whose husband starts experiencing nightmares about an upcoming apocalypse. The psychological thriller taps into a prevailing sense of anxiety fueled by economic crisis and doomsday news headlines, but if Chastain has any fears, it is more about her rapidly changing lifestyle.

“It is a scary thing to think that I won’t know what my life means at the end of the year,” she admits. “I don’t know what’s going to change and what will be different from the way that I live now, having six movies come out in the fall, so that is a bit daunting.

“I can’t plan what’s going to happen,” she says. “I can’t control it, I can just live in the moment and try to enjoy every moment, because it really is a gift.”