The British starlet's next projects include Tolstoy and Jane Austen adaptations, with a twist. 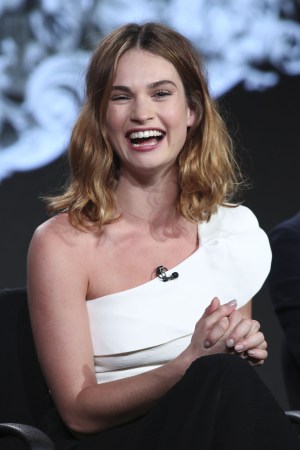 Lily James is most certainly a girl of the moment, even if her moments are set decades or centuries away. After turning heads as the mischievous Crawley cousin Lady Rose on “Downton Abbey” and taking the titular role in Disney’s live-action “Cinderella,” the 26-year-old Brit has two more period turns ahead — as Natasha Rostova in Lifetime’s lavish miniseries adaptation of “War and Peace” airing Jan. 18, and as Elizabeth Bennet in the lit-horror mash-up “Pride and Prejudice and Zombies” (opposite her off-screen beau Matt Smith). As the Roland Mouret-clad James told WWD during a break from the Television Critics Association tour in Pasadena, “I can’t wait” for more contemporary roles. Here, she dishes on Tolstoy and battling the undead.

WWD: What was your favorite day shooting “War and Peace”?

Lily James: There was a day where she’s very, very sick, and a way of curing yourself then was to have leeches and they would suck out the impurity of your blood. The fake leeches looked [too] fake, so I had real leeches on my arm sucking my blood. I had them on through the whole scene. You can’t see them now, but I had little scars. I’m very proud of myself. I thought it would make me feel really sick and like I was dying and help with the acting, but really it just made me giggle.

WWD: How nice to have a job as motivation to read Tolstoy’s novel. Was it slow going for you, or did you fall right into why it’s considered such a masterpiece?

L.J.: Yeah, I really did. Someone said to me when I got it, “It would be a great joy of your life to read it,” and it’s true. It always takes me a while to get into any book I read, but once I’m in, I’m in. With this, it captured me completely. Of course, I was desperate to find the next chapter about the Rostovs and know what was happening to Natasha and who she was in love with now. The war and the military and the philosophy was sometimes harder to get through, but I had such a fire to finish it and to understand it. But even if you didn’t, it really is a page-turner.

WWD: What did it mean to you to be able to come back and be part of the final episode of “Downton Abbey”?

L.J.: Oh God, I would have been devastated if I hadn’t been a part of the final series. It was such a huge part of my life. I came back and I just loved living in Rose’s shoes again and being with the whole family. I just felt like I was coming home. I’m just so proud and to have been a part of that show, I will treasure it always.

WWD: Do you get recognized more for Lady Rose or for Cinderella at this point?

L.J.: Equally, but not so much either. I don’t know – I don’t get recognized that much!

WWD: Encounters with the littlest “Cinderella” fans must be a special treat.

L.J.: I’m always making little videos for my friends’ kids, or if somebody asks “Can you just say hi to my little cousin, my niece, my friend’s friend’s cousin’s daughter? She loves ‘Cinderella,’ it’s her birthday…” It gives me such joy to be able to be that character and for the kids now to be what their idea of ‘Cinderella’ is, I just feel, again, so honored. I actually love it when little kids recognize me. It’s really exciting because they really believe in it, in that magic of when you were a child and something’s real. I like being a part of that again.”

WWD: Next up we’ll see you in “Pride and Prejudice and Zombies” opening on Feb. 5. What was the thing that you got really excited about going to work every day?

L.J.: I just loved fighting. I just loved kicking butt and beating the crap out of the zombies. I love the routines, the choreography. I love the costumes because it was Jane Austen, but with a twist: at one point I had a leather corset and skin-tight trousers and laced, black knee-high leather boots. To play Liz Bennet and have that internal conflict and life of that character, but be able to let her frustration and her dissatisfaction out through killing zombies was just brilliant. I wouldn’t have wanted to do “Pride and Prejudice” without the zombies. I think the zombies have always been what “Pride and Prejudice” has been missing.

WWD: Have you borrowed anything from any of the period characters you’ve played for your own personal sense of style?

L.J.: I think from doing “Downton Abbey” my style really changed because I understood accessorizing, because every morning I’d go into my trailer and there’d be different necklaces and earrings and gloves and handbags, and depending on my outfit, I’d pick what I would wear with it. So I learned a lot from Rose’s fashion, actually.

WWD: If you could choose your own designers for your next project, who’s on that list? Who would you love to wear on screen?

L.J.: I go for the British designers. I love Burberry, I love Dior, Chanel. I guess it would depend what I was shooting. I keep quite a low profile and I wear jeans and jumpers and Converse. I’m the girl that wears her boyfriend’s jumpers most of the time.