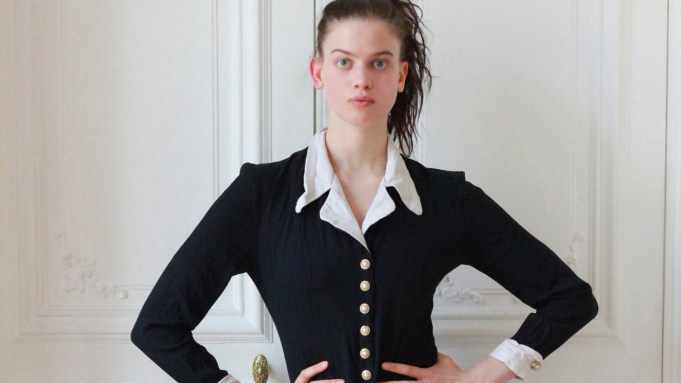 Lily McMenamy, the 22-year-old daughter of American model Kristen McMenamy, has been a catwalk figure since, well, practically birth. Though she was supposedly carried down the Chanel runway in her mother’s arms as a baby, her first real runway show was Saint Laurent’s fall 2013 collection. She’s also walked Marc Jacobs — in nothing but bloomers and gloves — as well as Chanel, Balmain, Fendi and Emilio Pucci.

She makes her transition into acting on May 4 in “A Bigger Splash,” a remake of the 1969 Jane Birkin film “La Piscine,” in a role she landed thanks, in part, to Karl Lagerfeld. McMenamy stars alongside Dakota Johnson, Tilda Swinton, Ralph Fiennes and Matthias Schoenaerts — just your average costars for your breakout film. When not in front of the camera, she’s trying her hand at miming, which she started studying this past fall. WWD chatted with her over the phone from Paris, while she was “dancing to Rihanna in my room.”

WWD: Where in Paris do you live?

WWD: What is a typical day like for you at the moment?

L.M.: I have an excellent day. I get up around 7, I make like a little chia seed pudding, I walk to school and then I go to school all day. I have lunch, and then I often do a photo shoot afterward or do a project or just chill and do yoga, whatever.

WWD: How did you become interested in attending mime school?

L.M.: I don’t really know, I feel like it was just kind of obvious to me, I just wanted to do things with my body in abstract ways. It grounds me in my body and in my mind, it just makes everything make sense and I feel much more confident doing other things and on top of it. I’m just better at kind of moving around, like, on photo shoots, I’m just getting so weird, and the photographer will just say “Lily can we do a normal one, can you just stand there please?”

WWD: How has mime school affected your acting or modeling?

LM: I haven’t done any cinema since, so I wonder how it will translate — maybe it will be really weird, maybe I’ll just be hiding doing invisibility movements in front of the camera.

WWD: What led you to want to transition from modeling to acting?

LM: I guess I always kind of had this innate desire to be onstage and be in cinema. I love cinema. And I did a lot of weird Shakespearean acting in high school, but then it became where all of the popular girls were doing it and none of the weird people were doing it, so I kind of stopped. And then I was modeling and then I got this job to be an actress and it kind of came back to me — it was like “oh yeah! I totally wanted to do that!” It was a really amazing experience that kind of opened up a new world to me, of potential and inspiration and fun to be had.

WWD: Do you see yourself focusing exclusively on acting now?

L.M.: It’s kind of a next step, it makes sense as a next step. But I feel like these things can all be quite fluid, you know? Like I feel it doesn’t have to be “I was this and now I’m this.” I feel like they all kind of feed into each other in a kind of organic way — at least I want them to. Definitely cinema is a different world. And I would love to dive into that world and see what happens. But I don’t really want to let my other things go, you know?

WWD: Have you found that modeling was good training for acting?

L.M.: I mean, like obviously, the performance element [was], but I don’t think my modeling is the best training for becoming an actress — I just kept giving eyes to the camera by accident and being, like, “f–k!” I think deep down I know I’m capable but on the surface I just have so much anxiety, like, “what the f–k am I doing here, this is a cosmic disaster, they should’ve hired an actual actor!”

WWD: What was it like filming with such an incredible cast?

L.M.: I have this one flirt scene with Ralph Fiennes and I was, like, “oh my god,” trying to flirt with him. I was, like, “Ralph I can’t do this I’m freaking out.” And he said “Hey man, don’t worry you don’t have to convince me, you’re good, you’re great.” Just nice little support like that — you get some support along the way and it makes you think “OK, maybe there is a place for me here.”

WWD: How were you cast in the film?

L.M.: It’s a really good story. I was at the Fendi show in Milan a few years ago, and I was kind of a bit sick and tired of being a model, just a bit overwhelmed by the fashion week thing that you have to do. And I go backstage and there were so many people coming toward me and I started throwing my hands and saying “I am love” in Italian, which is the movie set in Milan by Luca Guadagnino. And somebody heard me screaming that and she was, like, “you know the director is here.” And then I met him and he said “I have the perfect role for you.” And I was, like, “Alright.” Yeah. Easy.