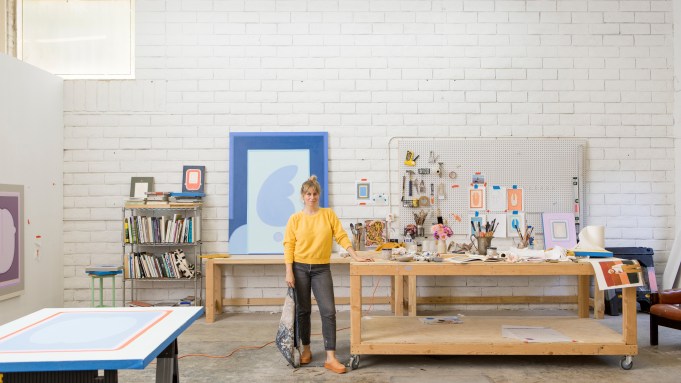 The artist was in Maine in with her family ahead of the Sept. 4 opening for her solo exhibition “Seed, Stone, Mirror, Match” at Charles Moffett gallery in downtown New York. Stockman, who has otherwise spent the past half-year close to home in Los Angeles, is countering the current moment with high spirits. It’s September, the pandemic is still a reality, and the air in L.A. is filled with smoke from fires burning up north. Stockman sums the current moment up with a metaphor: “The Titanic is sinking.” Yet many creatives have continued to find ways to make new work and react to their surroundings. Or they’ve started gardening.

“I feel like I’ve waited for my whole adult life to finally have a teeny tiny plot of earth to dig around,” says Stockman, who grew up on a farm on the East Coast. “And so in some ways that was this incredible gift, to have guilt-free time to just be growing things.”

The California-based painter, who also gave birth to her second child earlier this year, has been cultivating more than just flowers in her backyard. Stockman was unable to get into her studio at the beginning of the pandemic lockdown in L.A., and she became more attuned to noticing the details of her home surroundings. There was plenty of inspiration to find in her garden. She observed the color shifts of her dahlias and scabiosas; as the flowers faded, she was reminded of Italian frescoes from the 15th century. Stockman began sketching flower arrangements at night, and mulling ideas for color compositions. “The gardening became these prompts for, ‘Oh, this reminds me of this painting.’ Or, ‘What if I did this dead leaf brown next to this very soft carnation pink?’ And so I started to get all of my ideas for the paintings through gardening.”

Those botanical-born colors and forms are reflected in the 22 new abstract paintings on view through Oct. 18, all created during the last few months. “I felt like I turbocharged my practice by not being able to paint for three-plus months,” she says. “When I finally got back into the studio, I had all of these drawings and all these ideas and all of these color relationships I was interested in exploring.”

The title of the show — “Seed, Stone, Mirror, Match” — was plucked from a list of items placed in Stockman’s gardening basket by her toddler-aged daughter. “They’re little simple mundane objects, but they also become easily charged with metaphor,” says Stockman. She was inspired by the poet Mary Ruefle’s tendency to incorporate lists into her writing, as well as how the writer uses tone and structure on the page to convey and transform ideas — not dissimilar to Stockman’s approach to painting. “All of those objects have potential for revolution or catastrophe or self-reflection, or they’re easy metaphors for something bigger. And that’s how I think of abstract painting.”

Stockman also revisited Ruefle’s essay on Emily Dickinson, another poet whose creative process — writing about the world from inside her bedroom — is particularly resonant during the pandemic.

Moffett recently moved his gallery West from his former space in Chinatown, and Stockman painted her exhibition with the new light-filled space specifically in mind. “As a painter in Southern California, how natural light shifts our perception of color and value and tone is really important,” she says. Her color palette skews darker than her typical range, although the paintings are by no means “dark.”

“Because of the tenor of the current moment and everything that’s going on in American culture, I was in a darker mood,” she says, adding that the paintings are also darker in tone because “they can be illuminated by this incredible light coming in from this whole wall of windows.”

Stockman is newly represented by Moffett, but they’ve known each other for more than a decade. When Moffett opened his own space two years ago, Stockman’s work was the first he exhibited. “We’re both growing our careers. Charlie used the term ‘in lockstep,’ which is totally accurate,” says Stockman. “He takes on the risk of working with younger artists, and then the hope is everybody grows together.”