Lisa Cohen Recognizes Trio of Women in ‘All We Know’

In her new book, the author examines women from the first half of the 20th century that held prominent positions in the intellectual world, arts or fashion. 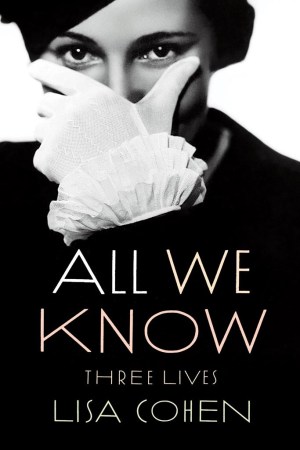 In every era, there are people who live fascinating, unusual lives who end up being forgotten.

Now, Lisa Cohen is recognizing three of them from the first half of the 20th century. “All We Know: Three Lives” (Farrar, Straus and Giroux) is her new book about a trio of remarkable women who held prominent positions in the intellectual world, arts or fashion and who were lesbians. At least one is almost totally unknown today: Esther Murphy, who begins the book, was the sister of famed aesthete Gerald Murphy and a legendarily mesmerizing talker who got a number of book contracts, but never actually wrote the requested volumes. (Who even knew that Gerald had a sister?) Mercedes de Acosta is much better remembered today for her romantic relationships with Greta Garbo and Marlene Dietrich than for her plays and poetry. Only Madge Garland made an unqualified success of her professional life. She was fashion editor of British Vogue, then fashion editor of an English newspaper, and later became the first professor of fashion in London at the Royal College of Art.

This story first appeared in the August 28, 2012 issue of WWD. Subscribe Today.

Cohen, an assistant professor at Wesleyan who is an out lesbian, began the book by writing about Garland, whom she hoped to memorialize in a biography as a single subject. But as time went on, she realized that it would be better to juxtapose Garland’s story with that of other women who interested her.

“These are not conventional lives,” she says, adding, “It was like doing the research for three books.”

Of de Acosta, she says, “I saw her as a writer, as a collector, as a fan and somebody who was a passionate admirer of performers.” She notes of Murphy that, although her track record with books was poor, “She put a lot down in her correspondence — amazing, beautiful letters.”

The writer Sybille Bedford was a living link to two of Cohen’s subjects; she had been in love with Murphy and had written a well-known book about traveling in Mexico with her (“A Visit to Don Otavio”), and had been friendly with Garland.

Cohen says that the process of writing about the women was at times difficult. She points out that biographer Michael Holroyd considers writing a biography to be a “collaboration” between the writer and subject; in fact, one is usually bringing a dead person back to life. “I loved them, I was annoyed at them, I was in awe, I was tired of them and also of myself,” Cohen admits.

Murphy was a socially awkward young girl, whose grace was not improved by her height — six feet — an outlandish measurement for a woman in her day. Her monologues often began with, “All we know…,” which is the source of the book’s title. Her father was delighted by her premature erudition; her mother much less so, disapproving of her as “intellectual and ungainly.” She married twice, but neither union — to Englishman John Strachey and to Chester A. Arthur 3rd, the grandson of the former president — was successful. Besides the impressive talk, Murphy did actually write reviews and essays. Over the years, she was given book contracts for biographies of several notable women, including Madame de Pompadour and Madame de Maintenon, a governess who became the morganatic wife of Louis XIV, but these were not completed. Despite her considerable eccentricities, though, some of her friends stuck with her throughout her life.

De Acosta, however, had particular difficulty keeping both friends and lovers, especially the latter. Her romances always began with a romantic obsession which quickly disappeared on her lover’s part when the woman realized how melodramatic and possessive de Acosta could be. She worshipped her sister Rita, a great beauty and a celebrated collector of clothes, objects, paintings and, most particularly, old lace and whose collections were the original basis for the Costume Institute. De Acosta collected a variety of ephemera from the women she had known and loved; housing it in a museum was one of the major preoccupations of the last part of her life. She also wrote screenplays, five plays and poetry à la Sara Teasdale, which were not successful, and famously wrote a memoir, “Here Lies the Heart.” Actress Eva Le Gallienne, another of her lovers, is said to have added to this title: “…and Lies and Lies.”

Garland is a remarkable subject because of her impressive powers of reinvention which the other two women, whose lives ended in penury, lacked. As Madge McHarg, an upper-middle-class girl in the Teens and early Twenties, she was not expected to work. When she got a job at the company that published British Vogue, her father wrote to her boss, telling him that she was not of age and that he was perfectly capable of supporting her (she was almost 24 at the time), and asking that she be sent home. Fortunately, her employer declined to do so. She soon married — Ewart Garland, an Australian who had been a World War I flyer. But before long, she had left him for Dorothy Todd, who had become editor of British Vogue, and who developed Garland’s career, eventually making her fashion editor. The two shared a small house in Chelsea, and remade Vogue, adding extensive coverage of the arts to that of fashion and society. Clive Bell wrote art criticism, Virginia Woolf published essays, Edith Sitwell and Gertrude Stein wrote poems, and the magazine was the first in England to showcase Man Ray’s Rayographs and Jean Cocteau’s paintings.

But Todd wasn’t a good manager and, in addition, the Todd-Garland ménage had come to the attention of Condé Nast, who was not pleased. Todd was accused of neglecting fashion, as well. In 1926, Nast told Henry Yoxall, the business manager of British Vogue, to fire both Todd and Garland.

This was devastating. Soon it became clear that Todd was drinking far too much and had embarked on wild spending sprees, running up large debts and often purchasing things in Garland’s name. They broke up, and Todd never again achieved professional prominence, instead going steadily downhill.

After a penurious stay in France, however, Garland was offered a job as the “Woman Editor” for the newspaper Britannia and Eve, a recently amalgamated entity owned by the Illustrated Newspapers Group. With the money she earned, she was soon living in Mayfair and bought a country house. Unlike her semianonymous work at Vogue, the newspaper provided her with bylines, and her name also appeared in headlines, thus helping her make her reputation. In 1934, she was rehired as fashion editor by British Vogue, a position she held until 1939. During that period, she became involved in a combustible relationship with one of the first women solicitors in England, Frances Blacket Gill.

Next, Garland went to work for the department store Bourne and Hollingsworth, then got a job at the Royal College of Art when that institution realized it was doing nothing to train young people for the fashion industry. There she created a department with programs of study to fill the gap, and many of those who studied under her later played integral roles in creating the Swinging London of the Sixties.

The three women Cohen writes about were at times discreet, at others surprisingly open, about their sexual orientation. But that was a very different era. Recently, there have been two well-known people who came out: broadcast journalist Anderson Cooper and singer Frank Ocean. Does she think that it’s the responsibility of celebrities today to do so? “I would never tell anyone what to do,” she says. But when she was a young woman, she adds, “It was very important to me when Martina Navratilova came out.”