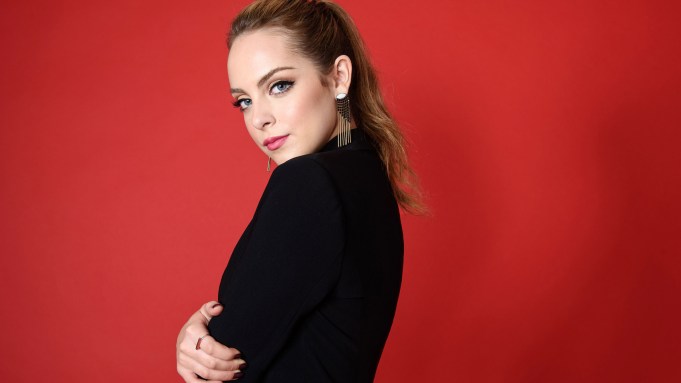 “Our world revolves around dynasties in one way or another,” says Liz Gillies. “I guess we’re sort of fascinated with them.”

She has a point. Look no further than the White House, home to President Trump and family. Or E!, where “Keeping Up With the Kardashians” plays on repeat. Or the music world, where the Carters (Jay Z and Beyoncé) reign supreme. One thing’s for sure: America loves a rich, powerful family. And on Wednesday night, Gillies makes her debut in one — albeit fictional.

The “Victorious” actress stars as Fallon Carrington in The CW’s remake of “Dynasty,” the popular Eighties series that chronicled the ongoing feud between two extremely wealthy families, the Carringtons and the Colbys. Created by Sallie Patrick and duo Josh Schwartz and Stephanie Savage (“Gossip Girl” and “The O.C.”), the new version brings the original to the present, infusing it with the sort of exaggerated, opulent drama that Schwartz and Savage are known for.

“There were so many things about the original ‘Dynasty’ that would not have flown today,” says Gillies. “We’ve taken it to 2017, where we can have these two ambitious women fighting over companies, and we can have several gay characters out as opposed to hiding like they were in the original or grappling with their sexuality. We’re tackling everything going on in Venezuela, we’re talking about fracking.…Seeing two women on screen being total badasses and taking names is important for girls watching the show and anybody now. It’s the right time for that — for girl power.”

A New Jersey native turned Los Angeles transplant, Gillies relocated to Atlanta for the show. She was familiar with the Eighties version “from a pop culture standpoint,” and she’s slowly working her way through all of its nine seasons. In the remake, she plays Fallon, a razor-sharp master manipulator who indulges in sexual escapades — and designer clothing.

Fans of the Eighties series know that the outfits were half the fun — those and Joan Collins as the ultimate manipulator Alexis Colby. It’s only right that the remake serves up similarly lavish costumes, but gone are the shoulder pads and voluminous blowouts. Here to stay are the fashions of today.

As Fallon, Gillies wears luxury brands such as Marc Jacobs, Balmain, Saint Laurent, Stella McCartney, Alexander McQueen, Alexandre Vauthier and Gucci, Gucci, Gucci. “I’m really a Gucci whore on this show,” she jokes, adding, “We’re trying to create iconic looks for each of these things.…[Costume designer Meredith Markworth-Pollack] works with me for what I need and what I think would play best, given the script, given where my character’s at. I’ve been so spoiled and my taste and clothing have completely changed.”

Though Gillies, 24, has been acting for more than a decade, “Dynasty” marks her first leading role. Her greatest challenge this time around was finding the right tone.

“If you watched the original ‘Dynasty,’ there’s a very specific tone there,” she says. “It’s a soap opera. At the end of the day, this is pretty much a soap opera, too. So is ‘Gossip Girl’ and so is ‘The O.C.’ But they’re not total soap operas. There are moments in the script that call for dramatic acting — an acting that’s real and based in reality — and there are other scenes that are simply ridiculous. Like, Nathalie [Kelley, who plays Cristal Flores] poured a bottle of Champagne on my head a couple of weeks ago and there’s no way to ground that.”

The pilot opens with shots of Trump and the First Lady, followed by the Kardashian-Jenner family. Gillies explains that this opening allows producers to beat viewers to the punch: “I understand the parallels and obviously producers do, too. That’s why we put that there in the beginning.” Though the show is likely hoping to attract the same audience as “Keeping Up With the Kardashians,” Gillies makes it clear that the content is different.

“I do think that watching this show, people will have the familiar feeling that they have [of] why they’re obsessed with these other two families,” she says. “I don’t know if it is reality TV or what it is, but we really are obsessed and we delve into that in the show. I will say though, in our show, unlike the Kardashians or something like that, no one’s ever just sitting on the couch in expensive sweatpants eating chips and talking s–t about each other. We like to keep it very tight and there’s a storyline there. It’s fun and very aesthetically pleasing.”

For the record, there is a lot of “talking s–t” on “Dynasty,” and Fallon does occasionally wear sweatpants — “high-end” sweatpants, at that. After all, that’s half the fun in watching a show about obliviously rich people: the absurdly priced clothing.