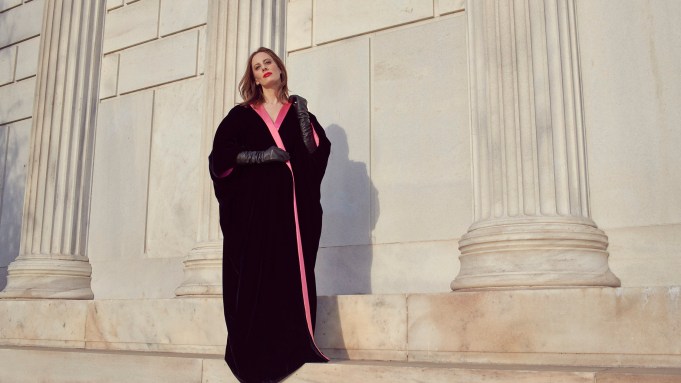 PARIS — “I’m selling one of the first important pieces I bought: a long Courrèges skirt that I got in Boston in ninth grade, at $1 a pound,” said Liz Goldwyn, who on Oct. 25 will launch her archive sale at vestiairecollective.com.

Sourced by the Los Angeles-based artist, filmmaker and author since her early teens, the collection of rare vintage pieces spans the Twenties to the early Aughts.

Ten percent of profits from the sale will go to Dress for Success, the nonprofit organization that provides support to women to achieve economic independence, including access to professional attire and development tools. Goldwyn has been working with the organization since the late Nineties.

As the granddaughter of movie-studio founder Samuel L. Goldwyn and actress Frances Howard, Hollywood glamour is in Goldwyn’s genes, although she’s more inspired by “people who are in science, the arts or music, philosophers or writers.

“Like anyone else who looks at movies, for me it would be more Italian cinema and French New Wave,” she said during an interview in the bar of the Hôtel Lutetia in Paris on the morning of a preview of the sale at the Ritz in early October.

Another driving motive for the sale, she said, was supporting the circular economy.

“It’s really important, in light of everything that’s going on in the world, and empowering other women, to think about the sustainability of clothes. Who else can benefit from them? You know, how can we change someone else’s life with something that’s quite easy?” she said.

“Fashion has changed so much in the last 20 years, and the business of fashion has changed. I think we need to be more politically aware and ethical in our purchases these days,” added Goldwyn. “The days of the luxury boom of the mid-2000s is over. You need to be a little more conscious.”

Sustainability was ingrained in her from a young age by her mother, and helped fuel her love of vintage.

“We were recycling before other people were recycling. That’s how my younger brother and I got our allowance, is by recycling soda cans and newspapers,” she said. “My friends and I…no one would have bought us designer clothes, that wouldn’t have happened. You went to thrift stores and you bought like 1920s long dresses, and 1940s dresses. That’s the stuff we wore, it was kind of like the art school thing to do. So I started vintage pretty young, at around 13.”

It was only at age 17, while working at Sotheby’s — where projects included producing the clothing section of the Marlene Dietrich estate auction catalogue — that she realized she had an actual “collection.” As an independent young woman living in New York, Goldywn started investing in designer pieces by avant-garde brands like Comme des Garçons and Maison Martin Margiela.

Marie Blanchet, head of vintage at Vestiaire Collective, billed as the leading global marketplace for premium and luxury pre-owned fashion, with a community of more than 7 million shoppers in 50-plus countries, the variety of the collection is “unique.”

The sale, as the third installment of Vestiaire Collective’s Archive series, encapsulates “what I always believed in, which is this idea of having almost 100 years of history [told through the eyes of] one single woman,” she said.

“Finding a woman who at the same time loves the 1920s and the femininity of the 1930s, 1940s and 1950s but who also has the most cutting edge, most sought after Nicolas Ghesquière for Balenciaga pieces — I mean, only Liz can have that,” Blanchet added.

Highlights from the sale include Sixties pieces by Mr. Blackwell, the originator of the “Best and Worst Dressed” list; a black Mod-style Courrèges dress, and a pink Gianni Versace minidress from Versace’s 1992 spring collection, which Goldwyn wore to the premiere of her documentary “Pretty Things.”

Accessories include a brown Hèrmes Bradka travel case and an array of Chanel and Yves Saint Laurent jewelry from the Seventies and Eighties, as well as a range of gold link travertine necklaces designed and produced by Goldwyn herself.

Goldwyn, who has published two books — “Pretty Things: The Last Generation of American Burlesque Queens” (2006) and “Sporting Guide” (2015) — talked to WWD about her adventures with vintage.

WWD: With your formidable family heritage, I’m curious to know if any pieces you own were handed down from your grandparents?

Liz Goldwyn: Sadly, no. I have a lot of my father’s stuff, like some of his Charvet ties and John Lobb shoes. The men in my family were real clotheshorses, both my grandfather and father were quite known for their style. I don’t have anything of my grandmother’s, sadly. I have a lot stuff from my mother, things I’m not selling, like the Yves Saint Laurent dress with all the crisscrosses down the front that Tom Ford redid when he first went to Gucci, and I have some movie star [pieces].

WWD: Did your childhood growing up in Hollywood circles influence you?

L.G.: People who have maybe influenced me, style-wise, were women of the world who achieved things or who were a bit scandalous in their day — the courtesans of the Italian Renaissance and the platform shoes they wore. The courtesans of the Folies Bergère, and the corset of diamonds from Cartier that they had commissioned.

The interesting thing about clothes is the person wearing them, right? Clothes are nothing without a brain and doing something in the world, because otherwise it’s just a pretty dress.

WWD: Which piece from your collection was the hardest to let go of?

L.G.: Some of the pieces I actually never got to wear. There’s a Jean Patou two-piece ensemble that I’m selling that I bought specifically to wear to an Easter garden party, only I was never invited to said Easter garden party, so I’ve had it for more than 20 years and it’s in perfect condition. It’s so beautiful, a pale pink shantung A-line dress with matching coat.

In my mind, I tend to create this fantasy of where I have to wear pieces to and if that specific occasion doesn’t present itself…I’m a little sad I didn’t get the opportunity, but someone else is going to see that and won’t have to have such a precious [idea] attached to it. They’ll just be, like, “I want to wear that to the market,” or whatever.

WWD: Are there any other pieces that you’re particularly attached to?

L.G.: All the Mr. Blackwell pieces, I’m selling a collection of them. There are two pieces: one’s this floor-length black velvet opera coat lined in pink satin, and then there’s this blue wool shift dress with a beaded bull’s-eye.

WWD: Where do you keep your clothes?

L.G.: I have two climate-controlled storage spaces. I have a lot of clothes at home and then I shop in my wardrobe.

WWD: And how do you archive the collection?

L.G.: Because I have this background in auction houses and cataloging, I know how it should be done, but it’s very expensive, so I do what I can and it’s been fun with this experience at Vestiaire, because it’s all being photographed and catalogued. But I’m different from most collectors in that I wear my pieces. I do have my velvets, beaded pieces and jersey pieces laid flat. I’m careful with things like that.

WWD: Do you have a current fetish for a specific era or designer?

WWD: What are you working on in terms of projects?

L.G.: I have a company called The Sex Ed, it’s an online platform dedicated to sex, health and consciousness. My first job was at Planned Parenthood at 13, so this is something that’s been in the works since a long time, it’s really my life goal. Again, online. Getting your information online is, I think, a very democratic institution.