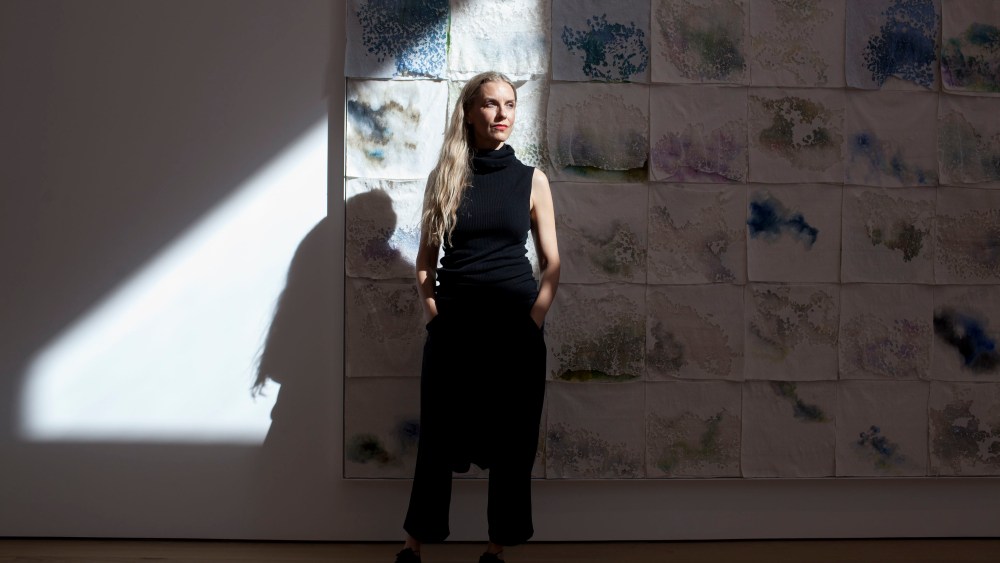 Artist Liza Lou didn’t have to look far to find the inspiration for her latest solo show, “Classification and Nomenclature of Clouds.”

“I noticed I was always looking up,” says Lou. “And sometimes when you have an obsession, you think it’s not related to your work; it’s just something you’re really interested in. So I didn’t think, oh, this is my next project.”

The Los Angeles-based artist’s exhibition is kicking off the second Lehmann Maupin gallery space in Manhattan on West 24th Street, designed by Peter Marino. The show marks Lou’s first solo New York show in a decade, and is a continuation of the artist’s exploration of beads as a fine-art material. A subsequent exhibition of her other bead-based work is displayed in a side room of Lehmann Maupin on West 22nd Street.

“Working with glass beads as a primary art material for so many years, I’m always surprised that the material keeps on asking for something that I didn’t know it was asking for,” she says of her process. “When I start a new project, it’s never a given that I’ll work with beads,” she continues. “Every single time, I end up getting inspired again by this material — it just keeps having more depth for me, and more that could happen with it. I wouldn’t choose to work with beads if I had a choice: it’s really difficult, they take a really long time to work with, they’re superexpensive, they require your life to change in a dramatic way.”

Lou also recently relocated back to L.A. after spending a decade in South Africa, where she established a studio with local beadwork artisans. She continues to work in collaboration with her studio, which helps her create the beaded canvases on which she painted for her latest work, which explores the symbolism of looking up and reflects upon the dramatic cloud patterns visible in Durban, South Africa versus L.A. “I just found myself more and more [that] I’d be in a fraught situation in an urban environment, and you can just look up,” she says. “If you look up, there’s a sense of aspiration to doing that. So I began to paint [clouds] onto these woven clothes,” she explains. “It has all of this deep resonance, so to paint clouds, something that’s very ethereal, on top of something that’s really so material…it just led to this whole exploration around painting and sculpture and dissolving these boundaries around what makes a painting and what makes a sculpture. And then I started to take out my hammer and smash the beads off of the thread.”

The show includes a video installation, which represents a new medium for Lou: singing. She and her studio in South Africa would sing gospel songs as they worked together around a table, and after moving back to L.A. she decided to integrate the practice into her publicly exhibited work. “Coming back to L.A and being alone, I suddenly noticed that I do that, and I’ve probably been doing it for 20 years — I just noticed that I do it because I was suddenly really alone,” she says of singing while creating.

She describes the video, which features her singing as she draws, as a soundtrack of her working life; certain days she draws in the “key of C,” others in the “key of E.” The piece also connects her back to her studio, as they work together from afar.

“For many years, my gesture was sort of subsumed in the gesture of the entire studio team. We would be weaving and sewing together, but you wouldn’t see my own signature on it…my own hand was part of the whole tsunami of labor,” she says. Back in L.A., Lou began taking the woven clothes and tracing over each bead. “I wanted to stay with my team. I wanted to say, ‘I see you,’ I’m here, I’m still with you, we’re together still; holding hands across the miles.”