The collection of apparel and accessories was designed in collaboration with artist and designer Alexander-John.

LL Cool J in looks from his new Chain Collection for Rock the Bells.

LL Cool J is a busy man. After a pandemic-fueled Hollywood shutdown that lasted for months, the actor and entrepreneur is back on the set filming his popular CBS television show “NCIS: Los Angeles.” In his spare time, he’s continuing to embrace his heritage and history by further expanding his Rock the Bells franchise.

In January, LL Cool J — born James Todd Smith — launched a limited-edition collection of apparel and accessories inspired by the history of the hip-hop movement, named for the title of his 1986 hit song. That attracted the attention — and the funding — of an eclectic group including Redpoint Ventures, Bozoma Saint John, Harvard Prof. Henry Louis Gates Jr., The Azoff Co., Mark Cuban’s Radical Investments, Glenn Hutchins’ North Island and Eddy Cue.

In June, he teamed with Atlanta-based artist and designer Alexander-John on a special T-shirt and hoodie for the Black Lives Matter movement and to protest the police killing of George Floyd. The success of that project prompted the two to expand their relationship and today, they will launch the Chain Collection, a selection of T-shirts, a hoodie, jogger pants, varsity jacket and duffel bag inspired by the impact that gold chains have on hip-hop culture. The collection, which will be available starting at 8 a.m. PST on the Rock the Bells e-commerce site, will retail for $75 to $495.

LL Cool J, who started his career as a rap artist as a teenager and has appeared in numerous films and television shows — in 2017, he was the first rap musician to receive a Kennedy Center Honor for lifetime artistic achievement — hopes this collection will serve as a unifier at a time of immense divisiveness.

He acknowledges the challenges, but believes the solution is “pretty simple. There’s a high road and a low road out there,” he said. “The key is not to demonize any group of people. I think that’s very important. We have to look at things on a case-by-case basis and be just in our thinking, and not take one group of people and use broad strokes. Like: ‘all white people are racist or all these people feel this way’ — I don’t agree with that approach. I think there are a lot of people on both sides of the fence who are looking at things differently.”

He said there were a lot of white people front and center during the Black Lives Matter protests along with “little kids, Millennials out there taking rubber bullets. And they were doing it because they believed in the moral high ground that this movement has.

“So my feeling is that ultimately, we need to unify. We need to be unified. When you go around the country, a lot of people have a lot of personal issues that are effecting their families around their dining room tables, so what we have to think about is how do we unify the country and at the same time be proud and represent who we are, and bring people together. And that’s what I’m trying to do with projects like this. This is what America is about, it’s about bootstrapping and stepping up and doing something with your platform to let your voice be heard and not sit in the back seat and let life happen to you.”

For LL Cool J, that platform, Rock the Bells, is one that embraces the history of hip-hop culture and speaks to his influences, which include hip-hop: graffiti, DJs, break dancing and MCs, the rappers who put the musical genre on the map, such as Kurtis Blow, Big Daddy Kane and Slick Rick.

Alexander-John, who is also a sneaker customizer, said he first met the actor when his manager, Claudine Joseph, bought a pair of his sneakers and made an introduction. “LL has been my idol since I was a kid and an inspiration to me as a young Black guy. This guy is everything you need to be as a guy. When I saw she was connected, we started having conversations and she said, ‘We’ve got to get you to do something for LL.’ The feeling was mutual. She made it happen.” 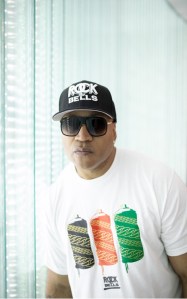 LL Cool J said he saw some of the designer’s sneakers and admired the work and the creativity. “He had his ear to the street and I thought the design was unique and special — adventurous but still disciplined — and I said, ‘I would love to have him work on a collection for us, something people are going to love.'”

Alexander-John said although he had an idea right off the bat of what the collection could be — it is inspired by the entertainer’s second album cover — he wanted to ensure he and LL Cool J were on the same page. “As an artist, I’m always looking to tell true stories so once I found out his inspiration in hip-hop was Kurtis Blow, Big Daddy Kane, Slick Rick — Slick Rick was one of the first raps I knew as a kid. I was rapping ‘La Di Da Di’ at five — I was like, ‘OK, this is going to be dope because the synergy is there.’”

From there, he researched the style of these rappers and what he found was a constant: their chains. “LL said we don’t have to reinvent the wheel, hip-hop is a classic, timeless thing and this is meant to bring homage to the culture,” he said. “I said, ‘How do we bridge the gap between this generation and what LL was inspired by,’ and the chains are that synonymous thing — everybody understands getting their own custom jewelry made. I attacked it as an art form coming off graffiti and hip-hop with the chain representing that thing that a lot of rappers used to express their personal style and logos and what they stood for.”

LL Cool J was pleased with the final result. “This Alexander-John collection came together in a magical way, and the rest is history,” he said. “He designed it and trusted us to really go out and find high quality and take it to that level. They say teamwork makes a dream work and I think it worked well this time.”

Although the collection won’t be available to the general public until today, the response so far from seeding and gifting some samples “has been outstanding,” he said. “People seem to be really excited about the product and about the design, so it feels good.”

Personally, he’s especially fond of the jacket and the chain drip pants, as well as the T-shirts. “This is a really cool collection and I hope people enjoy it and wear it in pride and health,” he said.

Although the Rock the Bells business launched right before the pandemic began, LL Cool J said the results have been “phenomenal. People have been loving what we’re doing. We’ve surpassed all the targets we had when we first started.” 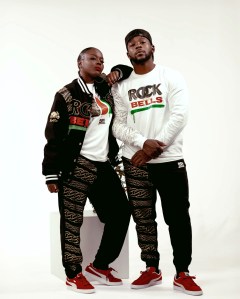 The Chains Collection for Rock the Bells is launching on Dec. 9.

But for LL Cool J, “the Rock the Bells platform is really just a work in progress, we’re going to take it to another level. Doing a collection like this, working with a young, talented designer who has insight into the culture and understands what we’re trying to do — that’s what this is about. I wanted to see him empowered. He’s been behind the scenes for many years doing great work for a lot of different brands and not necessarily getting as much credit as I think he could have gotten. It’s nice to take a young Black designer and say, ‘I’m in a position, I have a platform and you can go out there and shine.’”

But he stressed Rock the Bells is not just for Black people, but for “everybody — all races, all genders. It’s nice to support someone and I look forward to taking it to another level.”

Does that mean jewelry might soon make its appearance in the Chains Collection? LL Cool J’s wife has her own jewelry collection, Simone I. Smith, so it seems a natural progression for the brand. “I don’t see any reason we can’t take it to that next step and do something real dope that is really nuanced and speaks to the culture and the audience we’re speaking to: fans of hip-hop who really love the culture,” LL Cool J said. “It’s not really an ethnic thing, it’s more of a psychographic thing about what people love. There are so many people who love hip-hop culture, so for me, eating it, sleeping it, breathing it every day, chains do seem like a natural progression.”