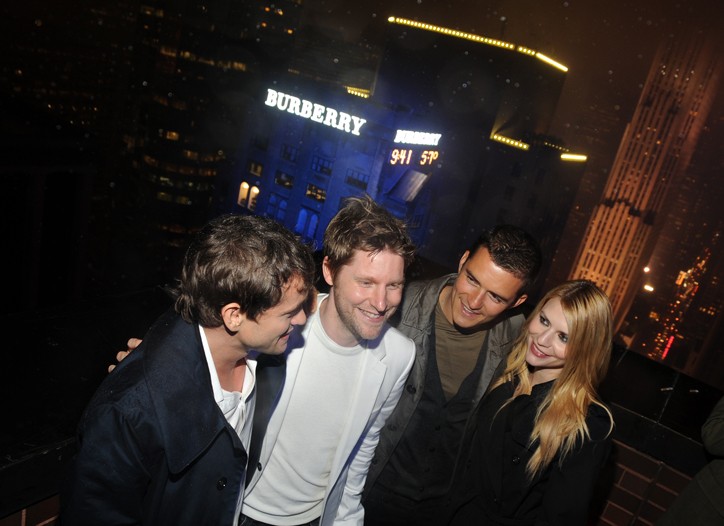 New Yorkers are clearly happy for any occasion to let loose these days. Thursday evening, a mix of fashion editors, designers and celebrities ignored cold, misty rain, and ascended to the New York Palace Hotel’s rooftop to help Burberry celebrate its new Madison Avenue headquarters and the neon signage crowning it. Champagne flutes were handed out, smoked salmon canap&eacute;s abounded, One Night Only gave a live performance and there was even a countdown leading up to a light show of said signage, complete with smoke and some enthusiastic cheers. If you didn’t know better, you would have thought it was New Year’s Eve.

But as decreed by Mayor Michael Bloomberg, it was actually Burberry Day. And so black-clothed men handed out checked umbrellas so guests like Claire Danes and Hugh Dancy, Lily Donaldson, Carla Gugino, Rose McGowan, Molly Sims and Emmanuelle Chirqui could frolic on the untented, white-carpeted roof and admire the New York skyline.

“I wanted it to feel a little bit glamorous,” said Christopher Bailey of his rather brave decor choice.

“Christopher called me and said ‘Do you want to come help me light the light?’ and I was on my way to L.A. so I thought ‘Why not?'” explained the actor of his presence.
Though guests seemed unbothered by the inclement weather (“Brrrrberry!” joked one man), they were less tolerant of the alcohol shortage, which kicked in around 9:30 p.m.

“That’s the driest party I’ve ever been to,” sniffed one woman as she headed to the more well-stocked Gilt Bar downstairs. Apparently, Blake Lively and Penn Badgley agreed — after a brief lap upstairs they held court with Justin Long at one of the watering hole’s back tables.