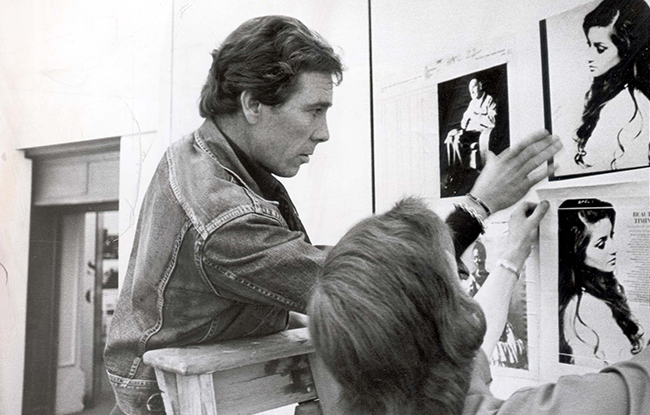 Perennially identified as he was as Princess Margaret’s former husband, the 1st Earl of Snowdon was very much his own man.

The longtime British Vogue photographer and filmmaker, 86, died Friday at home in the city where he was born, London.

Born Antony Armstrong-Jones, the son of Ronald Owen Lloyd Armstrong-Jones QC and Lady Rosse, his family tree included the “Punch” cartoonist Linley Sambourne, the architect Alfred Messel and the theater designer Oliver Messel. Despite his privileged upbringing, Snowdon weathered an emotionally tough childhood. His icy mother favored the sons from her second marriage over Tony and his sister, and he suffered from the lasting effects of a childhood bout with polio that left him with a withered left leg. Although he became an honorary fellow of the Royal Photographic Society, Snowdon’s career choice was cutting edge. One of his biographers Anne de Courcy once told WWD, “He became a photographer at a time when they were considered tradesmen — it’s as if Prince Harry went off to become a plumber.”

Known as the royal family’s token bohemian, he married Queen Elizabeth’s younger sister in 1960 when he was already at the top of his profession, snapping society figures and royals, actors such as Ingrid Bergman and politicians including then-Prime Minister Harold Macmillan. More than 100 of those portraits were bequeathed to the National Portrait Gallery by the photographer following his 2014 retrospective “Snowdon: A Life in View.” Rakishly handsome and emotionally complex, Snowdon married and divorced Princess Margaret, carried on countless love affairs, photographed strings of 20th-century luminaries and fought tirelessly for the rights of the disabled in Britain. The blue-eyed lensman was a man about town oozing charm, zooming around on his motorcycle, juggling women — as he did throughout his life — and experimented, in that oh-so-Sixties way, with drugs and sex. A Provost of London’s Royal College of Art, he still kept a London studio nearing the age of 80. As he once described his work, “You have to strip people of their poses and disguises.”

Having captured on film so many of the people who shaped the 20th century for magazines from Vogue to Vanity Fair, Snowdon’s portfolio included Princess Diana, Maggie Smith, Jack Nicholson, Gianni Versace, David Bowie, Tom Cruise and Uma Thurman among others. When some of those images were showcased in the “Interior Personalities” exhibition in his son David Linley’s furniture store on Pimlico Road in 2002, Snowdon was not bothered at all that the pictures had been cropped to emphasize the subjects’ facial expressions. “I’m all for cheating. I mean, I need all the help I can get,” he told WWD with a smile spreading slowly over his face.

“I really think the more talent people have, the more polite they are: Laurence Olivier and Alec Guinness always arrived on time and were impeccably behaved. It’s only the gutter snipes who leave their lipstick on the studio floor — and that’s just the men,” Snowdon said at that time in a WWD interview.

The acclaimed fashion photographer Gosta Peterson described Snowdon Friday as “a great photographer with strong personal style. Never a show-off. He was always positive and modest about his work.”

After meeting Princess Margaret in 1958 — the year after he had taken the official portraits of her sister Queen Elizabeth II and the Duke of Edinburgh for their trip to Canada — they married in 1960. Fellow sharpshooter Harry Benson said Friday, “When Tony got engaged to Princess Margaret it was a shot in the arm — now it was glamorous to be a Fleet Street photographer. But I must say I remember Tony got me marched out of Westminster Abby during the rehearsal the day before their wedding to the amusement of my Fleet Street colleagues who were outside behind the ropes!”

After getting divorced from Princess Margaret in 1978, Snowdon married a second time to Lucy Mary Lindsay–Hogg that same year, a union that lasted to 2000. Known as he was for his philandering and well-heeled ways, Snowdon was also a philanthropist and a designer in his own right. A man of many talents, Snowdon received a British patent in 1971 for his design for an electric wheelchair. He also helped to create an aviary in the London Zoo.

Buckingham Palace did not release a statement Friday but a Palace spokeswoman said, “The Queen has been informed.”

In 2002, fed up with Fleet Street reports of his impending demise, Snowdon packed his cameras and flew to Russia for two weeks of shooting in schools, hospitals, museums and more frigid locales, returning with photos of everyone from Siberian oil rig workers to the family of the celebrated jeweler Fabergé. The then 72-year-old told WWD at that time, “I was so bored of people writing that I’m frail and about to die. So I thought ‘sod that’ and I flew to Russia. I took a 23-year-old assistant and he was exhausted by the end. I was fine.”

Always with a keen eye for beauty, Snowdon said of that self-imposed assignment: “It was great fun. I love Russian faces. The only difference between them is beautiful and more beautiful.”

Linley wrote on his web site Friday, “My father was extremely fond of taking my sister and I on visits to interesting houses, selecting a broad variety of architectural styles for us to survey, from crumbling ancient monuments to ultramodern houses. He often led us to believe that we had happened on the house in question quite by chance, and while he advanced confidently to knock on the door, my sister and I would cringe in embarrassment — and were duly amazed when people who answered were so pleased to see him.”

The furniture designer continued, “He would tell us endless anecdotes about the history of the objects we were looking at, picking out unusual details for us to note. I well remember a visit to Rousham, when he showed the furniture of William Kent and pointed out how extraordinary it was for his time. William Kent is a favorite of mine to this day.”

“Thanks to his clever and effortless manner we were taught to really look: at architecture, at rooms, at furniture and paintings, and also at the smaller details that help make an interior — the locks on the door, the legs on a piece of furniture, even the light switches. Whether we were confronted by an eighteenth-century cabinet or a tubular steel chair, we learned to appreciate the quality of its craftsmanship and the attention to details that had gone into its making,” he said.

Interestingly, Snowdon never viewed photography as an art form. “It’s not one of the fine arts, and it quite upsets me that at the Royal College of Art, for example, it’s put in a category with painting and sculpture. Photographs are things that should be pinned on a wall, and when you stop liking them — just tear them up! And they’re very easy to reproduce, which is one of the reasons they’re not art,” he told WWD in 2002.

Snowdon has a similar irreverent attitude toward his subjects. “His charm is his candor,” said milliner Philip Treacy at that exhibition’s opening party. “He has a way of pulling you right down to size. I don’t want to say what he said to me while he was shooting me, but we’re still friends.”

Another guest Jasper Conran recalled how Snowdon made him take his shirt off during a sitting. “I was already tense, and that made me even more so,” he said. “The photo turned out beautifully. Tense, but beautiful.”

To help relax other subjects, Snowdon always kept a fresh blue shirt on hand in his studio for those who arrived uncomfortably overdressed, Courcy said Saturday. As someone who always had “the seeing eye,” he used that beyond his “supremely elegant home,” she said. “He was able to recognize the human dignity in the most unpromising subjects, but much enjoyed taking down the pompous!” Courcy said.

After finishing Snowdon’s biography in 2008, Courcy concluded that Snowdon was “not really emotionally adult. Like a child, he went for what he wanted — and that was constant change. The two constants in his life were work and sex.” But she also called him a “very English gentleman, always frightfully nice about every woman he was concerned with. He’s remained friends with virtually all of them.” (The fact that Buckingham Palace ordered eight copies of pleased the author.)

Snowdon also had one of the strongest work ethics Courcy has ever seen. He once told Courcy Princess Margaret was “very understanding of this” and it was she who helped get him his job at The Sunday Times, but she was “less keen about the hours he liked to spend physically making things in his workshop in Kensington Palace. She said Saturday In addition to Linley, Snowdon is survived by another son Jasper Cable-Alexander and three daughters Lady Sarah Chatto, Polly Fry and Lady Frances von Hofmannsthal.