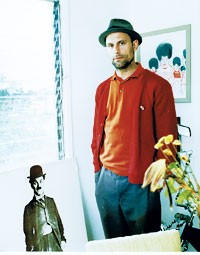 “That’s definitely something we had to face,” Rose admits, of the mainstream appeal of works by skateboarders and graffiti expressionists fueled on punk, hip-hop and street culture. Co-curated with former skateboard publisher Christian Strike, “Beautiful Losers” opened this weekend at the Yerba Buena Center for the Arts in San Francisco, after a debut at the new Zaha Hadid-designed Contemporary Art Center in Cincinnati. Both art centers helped develop the show, which is expected to travel to Japan and Europe, thanks in part to co-sponsors Agnes B. and Nike.

This story first appeared in the July 19, 2004 issue of WWD. Subscribe Today.

Matt Distel, interim curator of exhibitions for the CAC in Cincinnati and a veteran of the scene, well understood the challenge in staging such a show. “How do you package something which, by its nature, doesn’t want to be packaged? We had to be sensitive to that.” (To wit, the CAC had an uptick in membership, as well as a 35 percent spike in attendance with “Losers.”)

“When I was organizing this show, I was thinking a lot of the Beats. Mainstream society turned them into cartoons,” says Rose. “The same has happened with extreme sports, punk and hip-hop. But this work is more relevant to the general public than a lot of what’s in galleries — or even museums — right now.”

The fifth section, “Limited Editions & Ephemera,” is a truer reflection of the DIY nature of this movement. If the art world wasn’t interested in its graphics and illustrations, fledgling skateboard companies needed them for decks, T-shirts and sneakers. These products have spawned a collector’s market of their own.

For years, Rose, 35, has been a patron saint to this outsider scene. Adopted as a baby — a “clue,” he insists, to his endless sense of being an outcast — he ran away to New York at 19, where he dabbled in a garage band that went nowhere. What did catch on was a space he opened on the Lower East Side to show and sell photographs.

Over the next decade, Rose’s Alleged Gallery opened a satellite in Tokyo and eventually moved to Chinatown in Los Angeles before closing in 2002. Primed for something new, he and Strike founded Iconoclast Productions to develop exhibits, art books (including the 300-page companion tome to “Beautiful Losers”) and action figures related to the skateboarding and graffiti world. With two years of Nike funding, Iconoclast is also in charge of the billboard on top of the Stüssy Union shop on La Brea Boulevard that rotates original, provocative works.

“In some ways, this show is a bit like a history of Aaron Rose,” explains CAC’s Distel. “There’s this organic camaraderie that exists, but he’s always been the one to hold it together. Even though quite a few of these artists have been at the Whitney and other major places, it’s Aaron who gave them their first shot.”