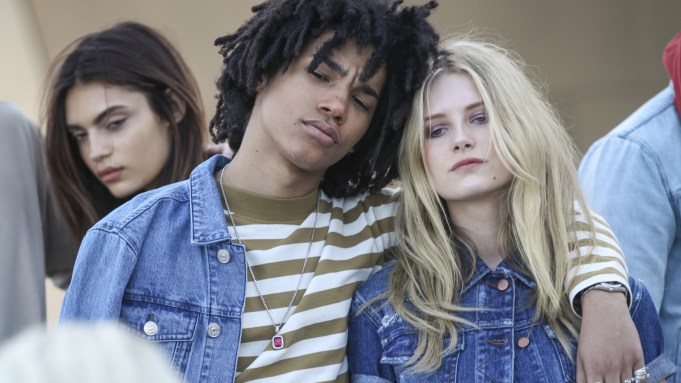 Luka Sabbat and Lottie Moss have a lot in common but also hold their ground when it comes to contrasting opinions on personal style, social media and fashion careers. While Sabbat was born in New York and raised in Paris by a fashion designer father and stylist mother, Moss grew up in the English countryside, observing the career of her older half-sister, Kate Moss. Both 18, they’re planning to move to London — him for college and her in a new apartment.

They’re also trying to make names for themselves in the fashion industry, mugging in campaigns for brands ranging from Adidas Originals and Botkier to Calvin Klein and Tommy Hilfiger Denim. On July 22, they step into the spotlight for Pacific Sunwear of California’s back-to-school campaign promoting the launch of PacSun Denim. While in Los Angeles for the PacSun shoot, Sabbat and Moss offered their analysis of L.A. style, tips for surviving social media and plans for building fashion careers.

WWD: How would you describe your personal style?
Lottie Moss: Sometimes I go for London chic. Most of my clothes are black and white, which is really bad. I feel black and white is really boring.
Luka Sabbat: It’s an art to me. Sometimes I dress real casual. And I wear the same stuff a lot. It’s very uniform to me. I used to wear a lot of Saint Laurent but then I realized I don’t need to do that. So then I just started doing uniform. Carhartt and Carhartt pants almost everyday. Cargos and regular. I just mix designer with regular-degular stuff.

WWD: Would you go DIY on your jeans?
L.M.: No, that’s too risky. I just feel that I would do it wrong and it would just rip the whole jean and I’d be like, “Great.”
L.S.: I just let it distress by itself. Every now and then I’ll cut the hem off to make it shorter. Ooh, I got a pair of Rick [Owens] pants. They were clean when I bought them. Now they look crazy.

WWD: What do you think about L.A. style?
L.M.: I think it’s a lot more free. In London, people dress a lot more how they think that they should dress. I think, here, it’s a lot more chilled out. Obviously, you can’t really wear T-shirts in England because it’s freezing.
L.S.: It ain’t New York style. That’s all I’m going to tell you. It’s certainly getting better. It’s not good yet. ‘Cause the thing is, it’s a lot of people dressing the same. It’s something about New York and Paris and London — those are fashion capitals. Fashion stuff happens here, you know, like the Saint Laurent show…blah, blah. You come out here and people wear full Saint Laurent outfits. You can wear that stuff and know how to mix it and know how to do it right. There’s that thing about New York. You walk around and there’s some homeless people who have better swag than rich people out here.

WWD: How has social media affected your career?
L.M.: I get to express myself more now. I compose pictures and show people who I am through Instagram and Snapchat and stuff. I just want them to see what it’s actually like. I don’t want them to think there’s this whole industry that they built up, that modeling is glamorous and it’s this huge lifestyle. I just want people to see we’re normal people. It’s not a whole glamorous shoot with everyone, like, “Oh my god and the gowns and everything.” It’s not like that. It’s chill and fun and I want people to see that.
L.S.: It made everything easier for me. At the same time it made it harder because social media is a blessing and a curse. In the same way you get put on [a pedestal], you get knocked off. In the same way you can be embellished or, like, look really cool, people can ruin your life off one tweet.

WWD: What kind of career do you envision for yourself in the fashion industry?
L.M.: It’s difficult to say. You see so many different aspects when you’re a model. You see all of the styling and the makeup and the hair and the photography. It gives me an idea of what I want to do but I’m not 100 percent sure yet. I’d love to work for a magazine. I’m not sure what I’d want to do yet. I just want to maybe do events and stuff. I’m thinking maybe [public relations] for a bit. I just want to have a look and see around and intern and find my place.
L.S.: I’m at FIT now taking two classes. I’m going to University of the Arts London in September. Eventually I just want to build a fashion house.

WWD: The fashion industry can be tough. How do you keep yourself going?
L.M.: You just got to keep your head focused and not listen to what everyone says because I think some people can try and put you down. I know a lot of people try to put me down on Instagram and things like that. I just don’t look. I see it when I scroll through but there’s no point. They’re obviously jealous. Most of them don’t have profile pictures so I’m like, “That says it all.” There’s no point in listening to jealous people. I’ve got my friends, I’ve got my family and I’ve got my agency. They wouldn’t have me on their books if they didn’t think I could do it.

WWD: What advice do you have for kids who look up to you as an influencer?
L.S.: Just be authentic. Don’t be some froufrou Internet person. Just do you.