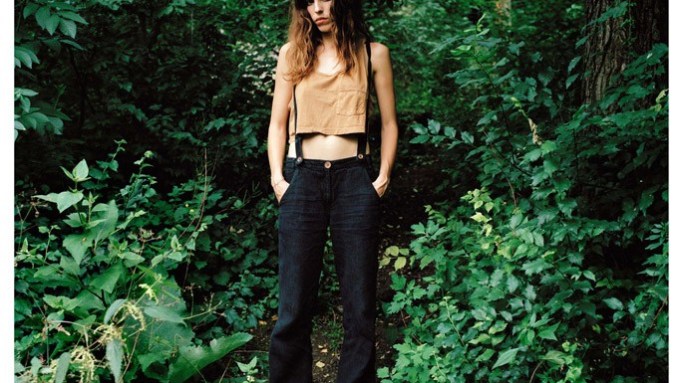 Lou Doillon seems to be in a perpetual state of creativity. Besides her main careers of acting and modeling (and raising a now 10-year-old son), she draws, paints, cooks, dabbles in photography, designs clothing — and the list goes on. After quietly writing music on her guitar over the last seven years, she can add musician to her lengthy résumé. Her debut EP, “I.C.U,” is set to be released Stateside on Oct. 2.

“I was always a terrible groupie and obsessed by bands more than movies, and my family was quite horrified,” says Doillon, whose father is French film director Jacques Doillon. “I would never go to the movies, and still today I see two movies a year and three concerts a week.”

Despite shunning evenings at the cinema, she has had a pretty successful career as an actress in France, steadily turning out films since her big-screen debut at age five in Agnès Varda’s drama “Kung-Fu Master,” which also starred her mother and half sister. As Doillon approaches her 30th birthday in September and reflects on her career so far, she’s excited to finally be calling the shots.

“I’ve been so used to always being the victim of a point of view, that’s why I never wanted to share the music, because I didn’t want to collaborate with anyone, which is very pretentious and stubborn of myself,” she says. “But I thought I just want to have one place where I’m the boss, where I don’t have to seduce or do it again or try to please someone and have this pressure I always have.”

Her decision to record an album didn’t come easily.

“I was supposed to play Nina in ‘The Seagull’ in the Festival d’Avignon, which is the biggest thing you can ever have as an actress, because Avignon is like the consecration of the gods in a way in France,” she says. “And I thought, Well, I don’t believe you can do two beautiful projects in the same year…so I said no, but it was a bit scandalous, and people thought I was doing the worst mistake of my life, so I started doubting very much, too.”

But now, with no regrets, she says, “To my wonderful surprise music is happening extremely well. It was, funny enough, a good move.”

A few years ago Doillon’s mother introduced her to French singer, songwriter and producer Etienne Daho. After hearing her material, he spent a year convincing her to record.

“When I had bad fashion days or bad movie days or bad theater nights, I would go back home and play my guitar until two or three o’clock in the morning to calm myself down, so it was kind of a therapy. I was very scared of sharing that,” she says of her initial hesitation.

Doillon finally recorded 10 songs with just vocals and guitar and shopped it to record labels for another year before scoring a deal with Universal. In February, she went back into the studio with a group of musicians Daho put together and recorded “I.C.U” in just 10 days.

“It was a weird thing of having played for seven years in your kitchen but never played with a band in your life,” Doillon says. “I had songs I had played for years, and when they put drums on them for the first time, I was nearly weeping with joy.”

With Daho as the album’s producer and Philippe Zdar, one half of the French synth-pop duo Cassius, as the album’s mixer, she completed the EP in 20 days.

“It’s actually been a long pregnancy in my head, but the birth happened very quickly,” she says.

Doillon describes her music as “bluntly honest” and says she “did the album at a very low place in my mind and in my life.”

The title track, a text message abbreviation of “I see you,” is about a former lover. And she says musicians who “brutally put their hearts on the table” inspire her uncomplicated sincere sound, counting Leonard Cohen, Bob Dylan and Patti Smith among her favorites.

Although Doillon’s been busy the last few months preparing for the EP’s release, she’s still found time to shoot a fall campaign for Seven For All Mankind directed by actor James Franco, and work on an upcoming project for Free People. She also has a movie coming out in December, directed by her father, that she filmed last year.

“I have movie proposals coming down now because, of course, as soon as one thing becomes hype, then it kind of has a domino effect on the rest of your life,” she says. “If it keeps on going quite well, I will be working only with the music until June.”

Looking at her multihyphenate career, it’s obvious Doillon has achieved a great deal, yet she says that she still has yet to accomplish “a third” of what she’d like.

“I haven’t had a real love life,” she says. “I’ve never had someone living with me in my house. I guess that would consume a lot of time.”