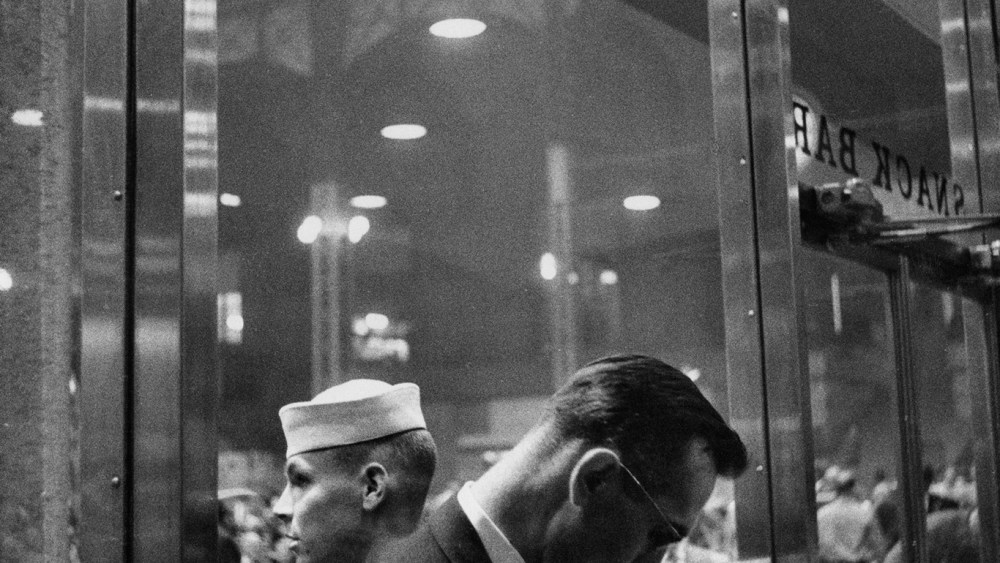 “I just felt for what I wanted to do, it was a much better place for me,” says noted photographer Louis Stettner. “I got more encouragement.”

The Brooklyn-born Stettner, now 93, who was a combat photographer in the Signal Corps in World War II, is explaining why he lives in Paris, which he originally visited in 1946. In 1947, he returned to the City of Light to organize an exhibition for the Photo League. “I just felt I loved the place,” he adds. “I came there to stay for two weeks, and stayed for five years.”

For decades, Stettner, who is also a painter and sculptor, went back and forth between Paris and New York, finally settling permanently in Saint-Ouen, a department in the northern suburbs of the French capital, in 1990.

The photographer’s current project is “Penn Station, New York,” which is out this month from Thames & Hudson and which consists of 65 never-before-published photos of poetic images of travelers in the iconic station taken in 1957 and 1958. The book has an introduction by New Yorker writer Adam Gopnik and an essay by Raphaël Picon. At the time that Stettner shot the photos, no publication was interested in them, because, he told Gopnik, they considered it “too present; it didn’t strike anyone as unusual enough — it wasn’t newsworthy.”

That has certainly changed with the passage of time. As for taking the photos, Stettner says that he was welcomed by his subjects: “There was no paranoia.”

He adds, “It was very easy. People were very friendly. I could wander where I wandered. I was in the dark, but there was no suspicion that I was doing something, spying or anything.”

Of the mood of the time, he adds, “It was after the war. We worked together in the war, like working in a factory. There was much more of a communal spirit that existed during then.”

As for the look of the people in his book, who are impeccably groomed and put together, Stettner says, “There was more self-awareness. These were commuter trains, and there were certain standards that people had to live by. The working class was moving into the lower middle class. They felt they had to follow certain rules in order to succeed. People had much more self-sufficiency. People had much more self-confidence than I think they have today in an industrial society.”

The 1963 destruction of the old Penn Station, a Beaux Arts masterpiece by McKim, Mead and White that was originally completed in 1910, galvanized architectural preservationists, who were unable to stop it from being torn down. That debacle did a great deal to create a movement for landmarks preservation in New York City. Stettner says of this extraordinary building, “The place was made of marble, done with great love and care, and it gave a lot of dignity to people who wandered through it. It reassured people.” In the station that replaced it, “You feel squashed, almost like an animal,” he says.

Stettner, who knew many of the important photographers of the second half of the 20th century — among them Lewis Hine, Weegee, Robert Doisneau and Willy Ronis — is one of the few surviving members of the Photo League, a group of politically engaged photographers in New York that existed from 1936 to 1951, and which, because of the caliber of its members and its emphasis on socially conscious photography, had an outsize influence on the development of the medium.

Stettner, whose groups of photographs include the Workers series, the Seine series, the Manhattan Wall series and The Bowery series, has had numerous exhibitions of his photos throughout the world. His work has also appeared in quite a number of books, and has edited tomes on Weegee and the nude, among others. He has taught at Brooklyn College, Queens College and Cooper Union.

Asked about the way he sees his role as a photographer, Stettner says, “I interpret through my vision the life around me, hoping to reveal things that people haven’t seen. Human beings are my primary concern. I’m very interested in the emotional content of a photograph.”

The term that photography critics like to use to describe his work is “humanist realism,” but he doesn’t care for the label. “My feeling about it is, Rembrandt was a humanist and Cezanne and Goya, but nobody calls them ‘humanist realism,’” he says. “Let me ask you something: Are the best dresses in the mainstream? It’s the same way in the photography world.

“I come out of the tradition of photography as a serious art,” he adds. “I went to school for it [at the Institut des Hautes Études Cinématographiques], so naturally I looked around at the human condition.”

Later he muses, “[Henri] Cartier-Bresson called it ‘the decisive moment.’” In “Penn Station,” Stettner’s work is described as capturing a “delicate moment.” He says, “What I’m more interested in is the ‘significant moment.’” Much of photography today, he says, is “entertainment.”

Cartier-Bresson once startled him by telling banker Andre Meyer that, if he wanted to buy the work of a photographer other than himself, he should purchase Stettner’s. “Mayer came and bought a lot of photographs off me,” he says. But Stettner did not know Cartier-Bresson well. “He was closed in. He was very distant. He didn’t communicate very well. The one I was closest to was Brassaï — I stayed with him down south.

“He was a close friend, my master,” he continues. “I used to come and see him every week.” Brassaï, in fact, wrote the introduction to Stettner’s first book, “Paris-New York,” which came out in 1949.

In creating ”Penn Station,” Stettner says, “I went over the proofs three times and changed the scans on them. There’s a man in England who got into the spirit of the work. There are two kinds of photographs — those which get more exciting with time and those which get less exciting.”

Stettner is working on nature studies, which he says can only be done with a large camera. Next summer, he will have a new show at the Georges Pompidou Centre. “They don’t want the icons,” he says. “One half of it has never been shown before. What they’re doing at the Pompidou is trying to get me out of the rut of being labeled ‘humanist.’ Cezanne didn’t do just apples, and Van Gogh didn’t just do tormented priests.”

The Photo League was destroyed by fallout from the Red Scare of the Forties, when it was put on a Justice Department blacklist. Stettner was affected by this — but less so than some others. “Paul Strand had to come and live in France,” he notes. “Lisette Model they never left alone.”

As for his own position, Stettner says, “People don’t understand that, by 1945, there had been two world wars. Twenty million people were killed, and we wanted to make the world a better place. I was working for the Marshall Plan, taking pictures. They called me in because I was a member of the Photo League and asked me, ‘Did you know any Communists?’” His response was, “’It’s not for me to say what someone else’s political views are.’ So they fired me…I don’t regret it. I think the world is a better place for socialism having existed, and I have no regrets at all about that.”