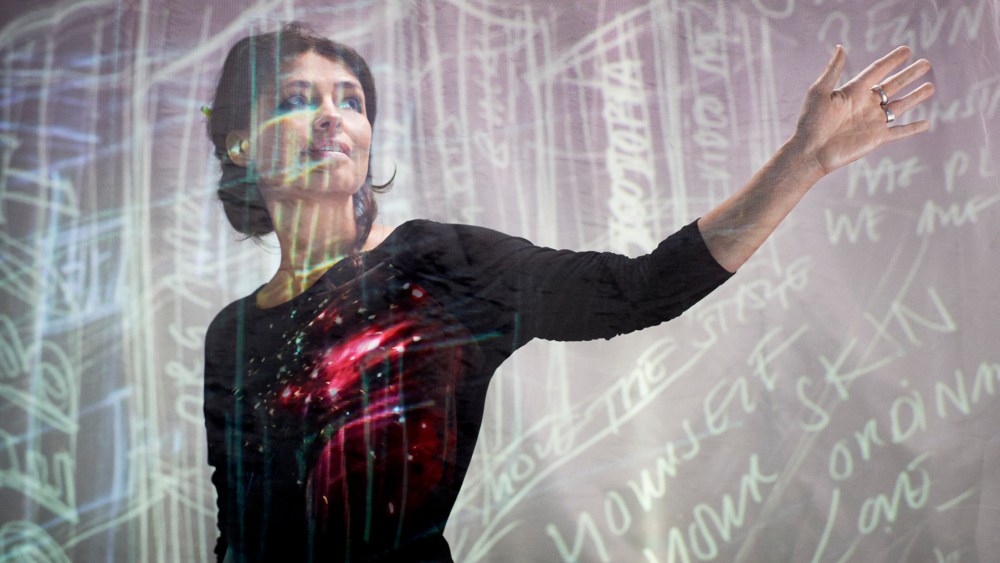 At first glance, Louis Vuitton, the Olympic Games and Kanye West don’t seem to have much in common. And yet, they do: one Es Devlin, the English set designer who brings pizzazz to sporting extravaganzas, concert stadiums and runways alike.

“One thing I’ve learned is not to expect one to behave like the other,” she says of her varied projects. “Each has its own kind of biological clock, that has very little to do with me.”

Her latest creation is the set for Louis Vuitton’s spring 2016 collection: “Nicolas [Ghesquière] is brave enough to really trust me to express their brand in a new and adventurous way,” she says of the house’s creative director. She was speaking from Vuitton’s unfinished set earlier this week, the sound of buzz saws still whirring in the background.

A native Londoner, Devlin, 44, started out studying English literature in Bristol and later fine art at Central Saint Martins, but along the way, she became interested in set design and enrolled at the renowned Motley Theatre Design Course in London. Work at some of England’s most prestigious theaters — the Old Vic, the Royal Shakespeare Company — followed. Then, in 2005, West saw her work and in typical fashion, snatched her from the relative obscurity of the theater and recruited her.

The immediate result was West’s smash tour “Touch the Sky.” They’ve collaborated on his touring spectacles ever since, including on the acclaimed “Yeezus” tour, and she has gone on to work with the likes of Lady Gaga (“Monster Ball” tour) and Miley Cyrus, on her 2013 world tour.

Her most current musical set design was for U2, work she describes as “the most ambitious project I’ve worked on recently in music.” The band in particular was “really committed to the theatrics of their show,” and were willing to “modify the sound of their show to work with the physical aspect,” she says. Next year, Devlin, a recently named Officer of the Order of the British Empire, will be working on a project of an even bigger scale: the opening ceremony of the Olympics in Rio de Janeiro.

In 2014, Devlin worked on Ghesquière’s second show for Vuitton. “They reached a point where there was so many events happenings, they realized they wanted to work with another set designer,” she says, referring to the house’s visual image team, Faye MCleod and Ansel Thompson. “We formed a team and we haven’t looked back.”

She’d never been to a fashion show before and she was hooked.

“I’ve absolutely gotten bitten by the bug,” she says, noting that she was surprised by “how emotional” the shows can be. “The whole spectrum of emotion you can achieve in a three-hour opera, you can achieve in a 12-minute fashion show.” She has since worked on the label’s Series 3 exhibit, now on view in London; fall 2015 and this year’s cruise show in Palm Springs.

By the time they started working on this season’s show, Devlin says she’d gotten a handle on Ghesquière’s thought process. “There are certain concerns and obsessions that orbit in his mind, certainly over the past year,” she says. Chiefly, those concerns have been around “the conversation between the Seventies and the future, between 1979 and 2046.”

So, on Wednesday morning when guests entered the Fondation Louis Vuitton outside Paris, they were greeted by a flickering LED screen, lit up from the back like jewelry in glass cabinets. There were many moving parts around the set, including sliding walls and other large-scale video screens that together seemed to recall the inside of a video game console. In a review, WWD said the “mega black-box structure…intended to drive home the point of Vuitton’s digital-age ascendancy.”

To kickstart the show, a young man in a video is seen strapping on a virtual reality headset, as if to suggest that the procession of models about to hit the runway are all characters or avatars in the video game he’s playing.

That, Devlin said afterward, is exactly what she and Ghesquière intended.

“The codes, algorithms and mechanics that produce the fantasy worlds in gaming are viewed as an imaginative realm in themselves,” she said. “The show is as interested in breaking the fantasy as it is in sustaining it on either side of reality.”