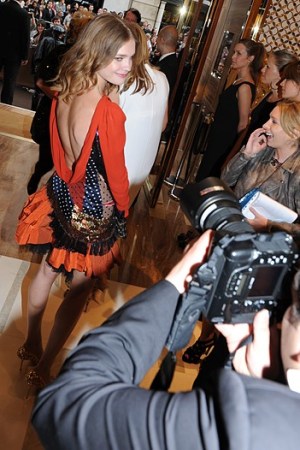 Louis Vuitton seemingly spared no expense when it feted the opening of its new store on London’s Bond Street Tuesday night. The lavish evening kicked off with cocktails at the 17,000-square-foot space — “This store is total sensory overload,” said Marc Jacobs of the Peter Marino-designed maison — and included live poetry readings and a ballet performance directed by Pablo Bronstein.

Dinner was held at a former post office space off Oxford Street, where guests like Gwyneth Paltrow, Anjelica Huston, Jerry Hall, Thandie Newton, Sophie Dahl, Tracey Emin, Cherie Blair, Sabrina Guinness and Bernard and Antoine Arnault wandered through a warren of dark corridors and onto elaborate stage sets designed by a London theatre company. There was a pine forest with a luxe tent where a genielike gal served absinthe; an old shipping port with a hot, crowded sailors’ bar; a melancholy brunette dancing alone to crackling tunes on a gramophone, and a mini harem, all populated with actors stroking and mock-seducing guests.

“Well, it’s all just spectacular, isn’t it?” said Huston as she surveyed the crowd before dinner. “Earlier today, I was listening to the Queen talk about the filthy state of the British economy, so tonight is a real anticlimax,” she added with a sly smile.

Grayson Perry, decked in full-on Victorian child garb, had a darkly comic take on the events: “It’s like hell here. You have to queue for everything with a bunch of people you recognize — but don’t really know,” he said.

After dinner, the already revved up audience got an extra jolt from a performance by Donna Summer, with Jacobs singing backup. The legendary songstress was only happy to lend her vocals for the night.

“Louis Vuitton has been kind to me over the years, and my daughter [Amanda Sudano] models for them. So tonight is really a family affair,” said Summer.

Jacobs, however, has no professional musician ambitions.