"It's a beautiful way, an unbelievable way to start the new year," boomed Jennifer Hudson Sunday night as she made her way through the throngs of people gawking at celebrities at the New York Film Critics Circle Awards. 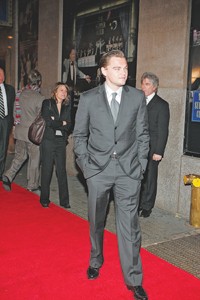 “It’s a beautiful way, an unbelievable way to start the new year,” boomed Jennifer Hudson Sunday night as she made her way through the throngs of people gawking at celebrities at the New York Film Critics Circle Awards, where she was being honored for her performance as Effie White in “Dreamgirls.”

There was Matt Damon by the bar. And there was Robin Williams. And Ryan Gosling, who’d won the best actor award for his performance in “Half Nelson,” in which he played a middle school history teacher with a crack problem.

It was the moment Hudson had been waiting for and it had been a long time coming and a lot of work getting there. First there were the grueling auditions for a team that couldn’t quite decide if they wanted her. Finally, after several weeks of waiting, she got the call and the offer. At which point it was time to start eating. A lot. “I gained 20 pounds to play the part, and lost 25 when it was over,” said Hudson, who was showing it off in a slinky black gown from Issa.

Gosling also said he made extensive lifestyle changes to help him get into character.

“I smoked so much crack on this movie, you wouldn’t even believe it,” he joked. “In fact, I’m on crack right now.”

Meanwhile, in Southern California, cast members of “Babel” showed up Saturday at the Palm Springs International Film Festival to accept their award for Best Ensemble Performance. Cate Blanchett and Brad Pitt flew in from the Virgin Islands, where they’re filming their next collaboration, “The Curious Case of Benjamin Button.” “We filmed all night, then wrapped about 6 this morning and got on a plane,” Pitt was reported as saying.

Still, he had time for a surprise. The festival was being held on the same night as co-star Rinko Kikuchi’s birthday, and when he got on stage to accept the award on behalf of the team, he said, “I think the first thing we ought to do is sing ‘Happy Birthday’ to Rinko.” And with that, he and the entire audience serenaded the much-lauded young actress, who was seriously blushing.