LOS ANGELES — “Oh my god, if I had to tell you who my favorite female star was, the others would be very disappointed, so I can’t. I cannot,” declared lady-loving Roberto Cavalli at the opening of his Rodeo... 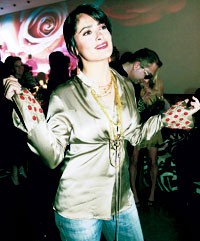 LOS ANGELES — “Oh my god, if I had to tell you who my favorite female star was, the others would be very disappointed, so I can’t. I cannot,” declared lady-loving Roberto Cavalli at the opening of his Rodeo Drive boutique Tuesday night.

The ubiquitous Italian designer, along with co-host Nancy Davis, threw open the doors of his nearly-completed store to benefit Davis’s charity, Race to Erase MS. But the women in attendance didn’t seem to mind the construction site. Cindy Crawford declared, “There’s no such thing as too sexy in Roberto’s world.” And Carmen Electra, who also knows a thing or two about sexy, said, “He always knows how to make women feel good.”

The most hotly-watched guest was an Ungaro-clad Christina Aguilera, whose seat in a reserved banquette with fiancé Jordan Bratman gave her a great view of the party. She shoved her ring in front of Salma Hayek’s face, exclaiming, “Look!” as Hayek cooed, and the pair gabbed about it for a good 10 minutes. Elsewhere, George Hamilton and Alana Stewart sat with Kimberly Stewart on an oversized sofa as Jason Davis (sporting one of the leopard-print napkins on his head gangsta-style) hung with stepdad Kenny Rickles and grandma Barbara Davis.

When Nancy left to get back to her five-month-old twins, Isabella and Arabella, her other son, Brandon, excused himself from a conversation to say goodbye and “I love you.” Later, he revealed that he does, indeed, have a hobby other than Mischa Barton — he’s been dealing art and most recently sold a Renoir. He plans to open his own gallery when he graduates from the University of Southern California in a couple of months.

Still, the party was not without its snafus. Mary J. Blige made a beeline for the door when she walked in at 8:45 p.m. and Cavalli still hadn’t shown up. “He’s on Italian time,” his handlers shrugged. But, at an hour-and-a-half late to his own party, he was still early, compared with Jack Nicholson, who sauntered in at the stroke of midnight.

Because of a flight delay from Barcelona, Los Angeles Opera director Placido Domingo scarcely made it to his own black-tie benefit the evening before. The event was a Valentine’s Day dinner held on stage at the Dorothy Chandler Pavillion downtown, amid the “Romeo & Juliet” set, for some 200 deep-pocketed opera fans. In attendance were Brian and Gigi Grazer, Barbara Davis, Eli Broad, Lee Iacocca and Patricia Kennedy, and Fred and Betty Haymen, who underwrote the rose-filled evening. Though the Grazers tore it up on the dance floor during the soul band’s performance at dessert, the highlight came when Domingo joined gorgeous soprano superstar Anna Netrebko, bass-baritone Simone Alberghini and tenor Rolando Villazón (said to be Domingo’s heir apparent) for an excerpt from “La Traviata.”