When Lucas Hnath started writing his play “Hillary and Clinton,” it was 2008. Barack Obama had not yet been elected for his presidency, Hillary Clinton was at work on the campaign trail for the first time and Donald Trump as commander in chief was but a punchline. Hnath, still young and full of impish distraction, wrote the entire thing, then ditched it and moved on to his next project. Eight years later, while Clinton tried for a second shot at being POTUS, the associate artistic director of Playwrights Horizons and Hnath’s friend Adam Greenfield read “Hillary and Clinton,” and was intrigued. He sent the play to the artistic director of Victory Gardens Theater in Chicago Chay Yew, and they did the first production.

Then producer Scott Rudin came along. He wanted to option “Hillary and Clinton” to appear on Broadway in New York.

“I told him, ‘It’s a play that’s very old,’” explains Hnath on a recent afternoon. He’s sitting at one of the tables covered by a red-and-white-checkered cloth inside the Broadway institution Sardi’s. Caricature drawings of actors — both from film and the stage — line the walls, and waiters wear all-white with aprons. He points out Nathan Lane’s picture, and mentions that his buddy, the director Sam Gold, is somewhere on the first floor.

It’s exactly two days before opening night of the play, which bows on April 18, and Hnath is reflecting on the path that’s led him here. “It felt very far from me and not how I write plays anymore. So I told Scott that he should be prepared for the likelihood that I would completely rewrite it all. And I went ahead and did that. This past summer, I opened up a new document and wrote the whole play again.” 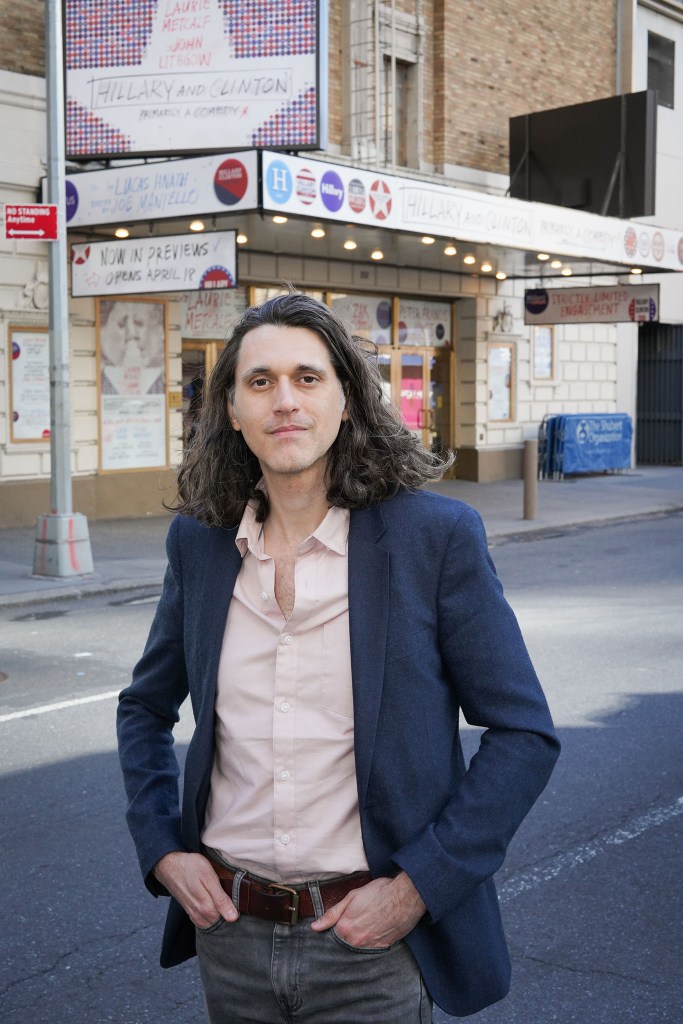 “Hillary and Clinton,” starring Laurie Metcalf as Hillary Clinton and John Lithgow as Bill Clinton, takes place in the future, on a different planet similar to earth. But the plot is something more familiar; a former first lady is trying to scrape together a run for President of the United States that’s proving more and more difficult as time goes on. She’s nearly come to blows with her husband Bill and campaign manager, and has to make a series of difficult decisions about her campaign — and marriage — along the way.

Back in 2016, the context in which viewers digested the play was so different, Hnath says.

“It created a bigger question about, ‘Wait, what are you saying about Hillary? Do you want her to win, do you not?’” he recalls of three years ago. “No, the play’s not propaganda. But I think it was hard for people to read it as anything but. The stories have become more mythic. The losses of 2008 and 2016 have accumulated more meaning and more significance and more stakes. Now, in a funny way, it feels like the best time to do the play. If it were done in 2008, I don’t think it would have resonated as much.”

Much of the play depicts Hillary and Bill arguing. Metcalf as Hillary and Lithgow in the role of Bill both give stellar performances, yelling and spitting at each other about Monica Lewinsky, Bill inserting himself into Hillary’s campaign and Hillary feeling frustration at her own lack of autonomy. Hnath, it turned out, wasn’t too far off with these scenarios he’d imagined for the script. Some folks who were close to Hillary’s two campaigns watched the play during previews, and Hnath got the opportunity to chat with them afterward.

Reeve Carney and Eva Noblezada Deepen Their Friendship in ‘Hadestown’

“One of Bill’s talents is the ability to locate one or two images, or even stereotypes, and really play the story,” Hnath says. “Bill is this Arkansas boy who made good — whip smart, and became a clever person. The difference with Hillary is that she didn’t want to play into any simple images. Where Bill was happy being two things, she wanted to be 81 things. This is the play’s notion of Hillary, but in actuality, it apparently matches the real person.

“I didn’t even talk to the campaign people for research. I held off on talking to anybody until previews. My feeling about it was, I’m playing with these mythic versions of the characters. I’m writing an original story, it’s not a bio play. But the more you hear somebody describe Bill and Hillary, what was different in their respective approaches, the more you can develop the arguments you’re making in the play. It was really interesting to talk to people who were there. I found out that, ‘Wait, what actually was the argument?’ It’s pretty much what happened in the play. We kind of got it.”