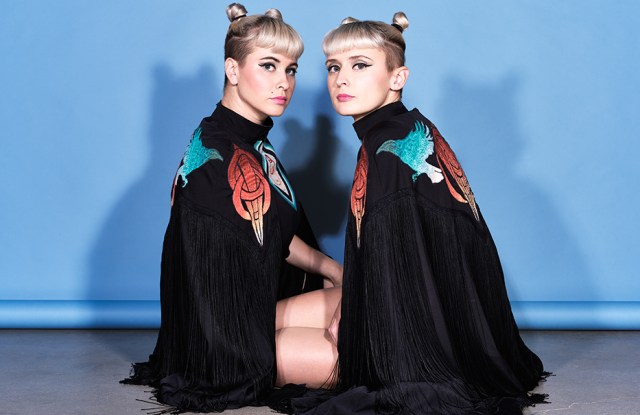 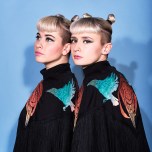 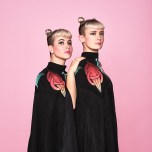 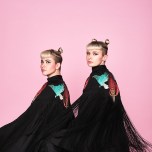 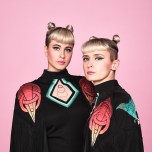 Musical artists have long understood the power of costume. Presenting a unified look can enhance sonic harmony, too, as The Beatles and The Supremes knew, as did the many bands that followed after them.

Among the most talented and eye-catching acts today is Lucius, fronted by vocalists Jess Wolfe and Holly Laessig, who are known for their onstage mirror imaging — rocking matching, auburn bobs, or platinum top knots, along with colorful capes or kimonos. The women, both 31, formed the band in 2005 while students at Berklee College of Music; six years later musician Dan Molad joined, followed by Peter Lalish. This year, the band relocated to Los Angeles from Brooklyn.

“We started off being inspired by a lot of artists with a very strong visual representation of the music — Bowie, Prince, Little Richard. A lot of artists that we grew up listening to had a very strong aesthetic,” Wolfe said. “I think it was a way to coat our discomfort on stage. We didn’t really know how to be up there; it was a little difficult to get into a zone and we were looking for something more exciting. If you can create a landscape for yourself and your audience to live in for a moment, there’s something exciting about that.”

Laessig has often compared their sartorial M.O. to that of a choir, presenting a single image that reflects multiple voices singing as one. Fans can hear that in two of their newest singles, released Nov. 25 on a 10-inch record titled “Pulling Teeth.”

“It’s perfect post-election material,” said Wolfe. While they’ve been playing the title track on their recently wrapped tour (they also opened for Tegan and Sara and Roger Waters), the other song, “The Punisher,” hasn’t yet been performed live.

“We created those songs for potential record contenders [their second album ‘Good Grief’ came out earlier this year], but we whittled them down to create a ride or a journey for our listeners. It’s a good opportunity now, after we’ve been touring for almost a year, to release something new for the holidays. We’re proud of those songs,” Laessig said.

They are equally enthusiastic about their custom-made capes, by Austin-based designer Kathie Sever of Ft. Lonesome. The ones pictured here are based on an antique kimono motif that Wolfe found.

“We create look books all the time and we brought [Sever] a few different ones. Then she does her thing,” Wolfe said. The pair also works with Brooklyn-based costume designer Christian Joy, who has created pieces for Karen O and Alabama Shakes.

“We are always looking to collaborate so who knows what the next record will bring about, “ Laessig said. One may be able to glean a few hints from their Instagram account, which she says is the social media platform that they enjoy most.

“We’re a little antiquated. We get comfortable in one zone, then there’s a whole new invention. We are still not in on the Snapchat frenzy. By the time we are, it will be something else,” she said.