The Welsh actor, Zooming from lockdown in the midst of a career moment he's long wanted, knows a thing or two about keeping it all in perspective. 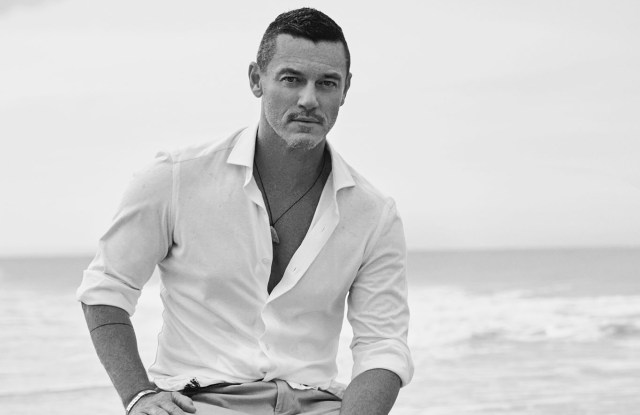 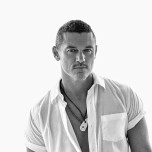 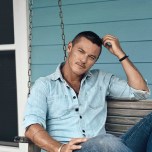 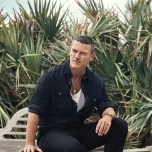 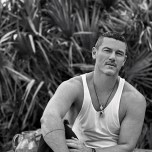 “Are you drinking wine? It is Friday, remember?”

Luke Evans is in good spirits this particular Friday evening, though mere minutes into a Zoom call with the Welsh actor and it’s hard to imagine him ever being in anything but. (It’s also reassuring to know we’re not the only ones having trouble keeping track of the days of the week as we slog through 2020.)

Yes, it’s Friday evening — in London at least, where Evans is settled in at home — and the wine is poured and takeaway is en route from Bistrotheque, in East London, which he’ll enjoy with a friend, before he settles in for a weekend of script studying.

Evans is at his home in London for a brief stopover. He spent much of the initial lockdown unexpectedly in the U.S. before finally heading back to the U.K. as his tourist visa neared its end. It’s been “chaos” since he arrived home in London — the fridge has gone out, the Internet isn’t working, his laptop is on the fritz. But Evans has a way of seeing paths forward in the most positive of lights — a good trait to have for the life of an actor, an even better one for the times we live in at the moment.

“There was maybe like a week or so at the beginning where it was the realization of ‘This is our life for the foreseeable weeks, months, years, we don’t know. How long is this going to be our life?’ And once that realization sort of dissipated and we accepted that this is where we were going to be in if we chose to, we could stay here for three months, I just thought, ‘Well, you have to look at the positive,’” Evans says. “In these situations, what can you do? You just have to get through it as best you can.”

The spring of 2020 was supposed to be spent on the road. After a lifelong love affair with music, Evans finally released an album in 2019, all covers, and he had planned to spend some time this spring touring, with stops at the Palladium in London, two nights home in Cardiff, a night in Birmingham and so on.

“I’ve been singing my whole life so to actually get to sing in front of a few thousand people who actually paid to come and watch me sing, nobody else, just me, was something that I was really looking forward to,” Evans says. “So let’s hope it happens.”

He originally wanted to be a recording artist when he was younger. When that didn’t happen, he went into music theater, and as things slowly moved more into acting, the dream of ever having an album began to fade. Then he started doing movies 12 years ago — and with that came an international platform that suddenly put music back on the map.

“Over the years, my fan base has built up. My international profile has risen. I have fans in South Korea, I have fans in India, America, Latin America, all over the world now. And because there’s been a couple of times I’ve sung on my social media, or when I did ‘Beauty and the Beast,’ of course, people got to hear my voice,” Evans says. “And that started the seeds germinating: when on such a huge international platform, so many people heard it.”

Before he knew it, he found himself in a recording studio — not doing voiceovers this time.

“You’re just alone in a room with just the music and your voice and you can make mistakes and you can be brave because no one’s going to question you,” he says.

He’s even added a recording studio to his London home, where he’s been experimenting during lockdown, writing his own music this time with hopes to release a second album of original songs.

“When I sing I feel…well, myself. I’m singing like myself. I’m being myself,” he says. “It’s my voice and it’s my interpretation, and it’s the thing that I’ve always loved to do. When I’m singing, I feel very free and very connected to my spirit, my soul. Acting is something I’ve loved for a very long time. But it’s different with acting, because you’re playing a role, you’re playing a different person, so you’re often not being yourself. You’re being someone else, and that’s always a big challenge and a really enjoyable thing to do. But singing for me is a very pure, honest manifestation of what I love to do.”

When Evans last appeared in WWD, in 2014, it was one of the first times he had publicly discussed his sexuality, after years of it being sidestepped in most of his press. He now lives more out and proud than ever, and for this story collaborated with his boyfriend, creative director and set designer Rafa Olarra, on the photos, Olarra’s first time working as a photographer and their first time partnering creatively.

“From the day we met, I’ve been so impressed by his talent as a set production designer, his aesthetic detail, his attention to detail,” Evans says of Olarra. “I mean, I can’t leave anything out in the house. And there’s certain clothes that he doesn’t like. It means he just has a way that he likes things. So I was not shocked at all when I saw the pictures [from the shoot]. It was like he’s been doing this his whole life. He has an incredible eye for detail and beauty and composition and colors. I’m really proud of him and very impressed by his work. He obviously had a great muse as well.”

The two spent much of the spring holed up in Florida, where they had planned a short rest after Evans wrapped nine weeks of filming in the U.K. As the weeks stretched on, they learned to meditate, and they took advantage of having to stay in by educating themselves on all the TV their usual schedules prevent them from seeing: “The Morning Show,” starring his friend Jennifer Aniston — “I thought her performance in this show was just so unlike anything that people know of Jennifer Aniston” — and “Ozark,” helmed by Jason Bateman, “a star on all levels.”

“I could not wait for the day to be over so that we could watch the TV,” Evans says.

When he speaks about the shows he’s loved, and in particular the performances that blew him away, his whole face changes. He’s completely consumed with enthusiasm and passion — it’s palpable, even several time zones away and through a laptop screen. He understands what makes a good performance, and there’s a sense that after these handful of years, Hollywood is understanding what exactly Luke Evans can give in return. He’s arguably staring down the most exciting time in his career, with a buzzy new series under way (“Nine Perfect Strangers”) and, the biggest deal to him, a “Beauty and the Beast” spinoff project for Disney+ that centers on Gaston and Le Fou (played by Josh Gad).

“The fact that it’s a musical is probably the coolest part of the whole thing,” Evans says. “And that Alan Menken, who wrote ‘Beauty and the Beast,’ ‘Aladdin,’ ‘Little Mermaid,’ ‘Little Shop of Horrors,’ the list goes on, he’s writing the music. We just feel so honored that he’s even said yes to doing this. I will tell you that Josh and I have read the first two episodes and we’re blown away. As is Disney. I mean, me and Josh just cannot believe that we came up with this idea and they’ve gone with it, and now we’re making it.”

But Hollywood seems to like Evans dark, broody, and often antagonistic: “Dracula,” “Fast & Furious,” “The Alienist,” which returned for a second season this week on TNT. The show stars Dakota Fanning, Daniel Brühl and Evans as an impromptu crime-solving trio investigating a serial killer in New York City in the late 1800s. Evans is John Moore, a charming, alcoholic illustrator and man about town.

“What’s lovely going back to a character that you’ve played before is I really like John Moore. It’s nice to see his progression, his character progression,” Evans says. “The fact that he’s found his footing. He’s standing tall and he’s proud of his new job and his new career. He’s given up the alcohol. And seeing [Fanning’s character] Sara Howard’s detective agency and how progressive that is in itself, and how the three of us come back together to work on a crime of…I mean it’s very dark.”

Right before lockdown, he was shooting a series called “The Pembrokeshire Murders,” in which he stars as a detective superintendent in the true story about one of Wales’ worst serial killer crimes. So yes, “quite dark,” Evans says.

“They just happened to come my way,” he says, when asked if there’s any selective pattern in such serious material. “At the end of the day, the thing about being in ‘The Alienist,’ when it first came to me, I think Daniel, Dakota and myself all were in the same boat. We’ve not done any television before. We are interested in doing something cool. We’re watching ‘Breaking Bad’ happen and ‘True Detective’ happen. ‘Mad Men.’ ‘House of Cards.’ And I think all of us separately, without knowing each other, were all simply thinking the same thing: the right thing comes along, we’ll do it. You have to be very adaptable as an actor because you never know what’s going to come your way. It really is exciting because you go, ‘What’s this script going to be like? What do they think I want to play? What are they showing me?’”

The next five months will be spent shooting “Nine Perfect Strangers” for Hulu, the latest from “Big Little Lies” creator David E. Kelley and based on the Liane Moriarty book, which follows nine strangers on a wellness retreat. Evans will star alongside Nicole Kidman and Melissa McCarthy, as an undercover journalist.

The series was originally set to shoot in L.A., but relocated to Byron Bay as the pandemic continued to unfold. Suddenly he and Olarra were having to rearrange their plans for the next five months, setting up in Australia instead of within the U.S.

“But it’s good to be malleable especially in this day and age, where life changes and life throws these things at you and you have to be ready to catch it, whatever it is they throw at you,” Evans says, in a manner so authoritative and reassuring you just might have to believe him. “It’s not a bad trick to have up your sleeve, to be able to adapt on the spot. Although I’m not brilliant at it — I just have to do it because it’s my job. And the thing that this virus has done and this lockdown, we have no control over it. The shops shut. You have to stay at home. And you can’t argue the point. The world is doing the same thing and you have to sort of detach, and that’s sort of what I have to do when I get a job and I go, ‘Where are we living? Where are we going? How long? OK, all right, OK. Give me a moment. I’ll get through this.’ It’s a good thing, to be able to detach from what you can’t control.”