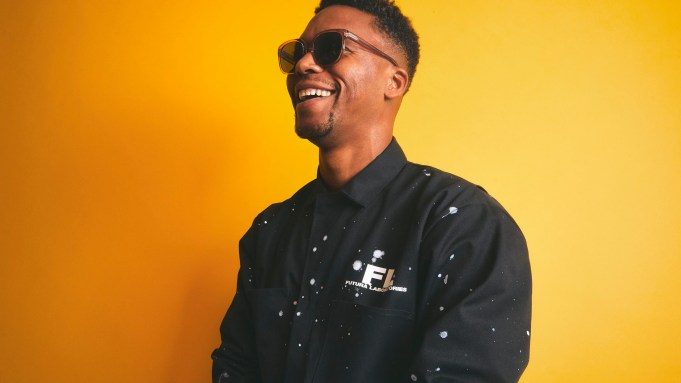 If home is where the heart is, then the heart of Grammy Award-winning hip-hop artist Lupe Fiasco is in Asia. More specifically, Japan, but after starring in his new docuseries “Beat N’ Path,” which launched globally on July 1, his heart may be in China.

The 37-year-old rapper, who released his seventh studio album, “Drogas Wave,” in 2018, stars as himself in an anthropological role in the Hong Kong-based Studio SV-produced series, exploring Chinese culture through food, music and martial arts.

As Fiasco travels through Shanghai, Beijing, Dengfeng and a Shaolin temple inside Dengfeng, he is introduced to the Fa Wang Buddhist temple, cities where 30,000 students learn kung fu, and a Muslim mosque where Wushu practitioners train and stop to pray for the call to prayer. “It would’ve been super strange, but we did that when we were kids,” he said.

“You’ll see me say ‘this feels super familiar,’ because it was stuff that I was doing when I was a kid and a teenager in martial arts class,” said Fiasco. “I’m talking to my shifu, and I couldn’t understand a word that he was saying, but when we started doing the forms, we didn’t need to. We would be practicing for hours and not really speak, and he’d make adjustments and stuff like that and it was just mind-blowing.”

Fiasco keeps a musical diary to unpack what he’s seen and experienced on his journey, which serves as a side narrative of the series. The final product is his new single, “Air China,” which also debuted on July 1.

“I wrote a whole song through the show, pointed out different experiences,” he said. “Some of it is obscure and other stuff you blatantly see. I actually get the beat at the beginning of the show.”

The Chicago native was almost a fish out of water in the country, but he was able to break down the cultural and language barriers through martial arts, which he studied under his father growing up.

“I was a little samurai,” Fiasco said. “The first thing my father gave me was a Djembe drum and a samurai sword, so to me it’s not new.” He began his martial arts training at his father’s west side and south side Chicago schools at three years old. Due to his training, he was able to count from one to 10 in both English and Japanese. He said, “I always say I could probably count to 10 in Japanese before I could count to 10 in English.”

Part of his training involved running barefoot in the winter with up to 50 of his father’s students. “[My father] wasn’t faking the funk, he wasn’t just watching the kung fu movies and copying them. When you look at the traditional martial arts, that was us — but we were black.”

Fiasco said this unique upbringing made him and his martial arts peers feel like an “outcast.” Growing up in what he describes as “one of the most segregated cities in the country,” he felt “double segregated” because his peers failed to understand his lifestyle. As a teen, he began to question his father’s motives, but he finds recognition in his father’s teachings during his journey in “Beat N’ Path,” as well as similarities to his life and upbringing.

“People don’t understand it, they’re scared of it, so it’s like I can’t really approach him because he’s a black belt kid and he’ll beat me up so there were all of these kind of barriers,” he explained. “It created a sense of discipline, created a sense of purpose. It connected you with a different culture, and like I said being able to count in Japanese before you could count in English kind of skews how you look at the world and what your perspectives are and what your morals and your ethics are. It’s still something that I wrestle with, but going through the journey on the show you see a lot of the recognition of my father.”

The hip-hop artist had a desire to break into the Chinese market, but he wanted to do it in a different way. He first explored parts of China as a local, “taking a train from the airport, wandering the city, staying with friends, couch surfing and stuff like that” to break down misconceptions and stereotypes and “get a sense and feel of the vibe, the language.” Partner Bonnie Chan Woo pitched the show, and they soon filmed a pilot, followed by a miniseries.

“Beat N’ Path” first aired in parts of China and Southeast Asia and won Best Direction at the Asian Academy Creative Awards in Hong Kong. After a setback on worldwide distribution, the show finally released on a dedicated web site. “We found a way to get it here fortunately for the fans and everybody who was waiting around for it,” he said.

The Lupe Fiasco fanbase is very loyal. In 2010, 200 fans gathered outside of the New York City office of Atlantic Records, his former record company, to protest the delay of his third album, “Lasers.” Fiasco crossed into mainstream after his guest verse on the Kanye West song, “Touch the Sky,” where he opens with a line about Japanese manga, Lupin the Third. Closet skaters found an anthem in “Kick, Push,” the lead single from his 2006 album, “Lupe Fiasco’s Food & Liquor.”

He is also one of the often-named rappers to elevate hip-hop’s style in the mid- to late-2000s, with West, Andre 3000, Pharrell Williams, and Kid Cudi. While Andre 3000 wore flamboyant outfits to match his unique persona, and Kanye and Pharrell re-introduced the hip-hop world to high fashion, Fiasco name-dropped brands, labels and revered figures before the current generation could obsess over them.

On “Gold Watch,” a song on his 2007 album, “Lupe Fiasco’s The Cool,” he mentions brands like Neighborhood and Clot, before listing his many likes that include Yohji Yamamoto, Junya Watanabe, Diptyque candles, Maharishi Sandals, Dita sunglasses, False T-shirts he bought at Dover Street Market, Montblanc pens, Moleskine paper, Goyard bags and Monocle Magazine.

He admitted that his love for fashion, especially Japanese fashion, stems from his martial arts upbringing. “We didn’t have anything like that even though they were, in some cases, referencing the whole American era,” he said. “I feel like the American fashion didn’t express it or they just kind of took it for granted, where the Japanese designers were focused on very specific details.” He cared more about meeting Skate-Thing, Nigo, and Kazuki Kuraishi than the designers from the top fashion houses in the world, and when he had the opportunity to start his own label, he started it in Japan.

Fiasco forged a new path for rap fans who couldn’t fully relate to the genre. Today, he stands in an elite class of hip-hop artists who are described as too lyrical. Listeners even admit that his bars go over their heads. His non-conformist attitude holds equal weight to his pen and arguably had a bigger impact on hip-hop culture. Before Drake played Fortnite with Ninja, Fiasco faced pro gamer and Guinness Book World Record holder Daigo Umehara, in Street Fighter IV, and won.

In 2017, he shared videos of his samurai training, much to the surprise of the Internet. “It’s funny because I come from that,” he said. “It was a decision, do I show people that I do this? That I dress up in hakamas with a sword on my hip in my living room? Is it time for that? And I felt like, ‘Yeah sure why not?'” The relationship between hip-hop and martial arts was first popularized by the Wu Tang Clan, but it laid dormant for years.

“I feel like because I’ve had the commercial success and I’ve been able to maneuver and stay relevant in that space, I’m allowed to go and do the super creative and the super obscure,” he said. Though he wonders, “where’s the craft going?”, and “what hasn’t been done?”, he said, “I think for the most part, I’m comfortable where I am creatively, exploring, playing with different things, but I do have some things that are tucked away.”

Viewers of “Beat N’ Path” can support Rebuild Foundation, a platform for art, cultural development, and neighborhood transformation during the show on lupefiascobnp.com.