WWD sat down with the 26-year-old Cleveland native to talk music, fashion and movies. 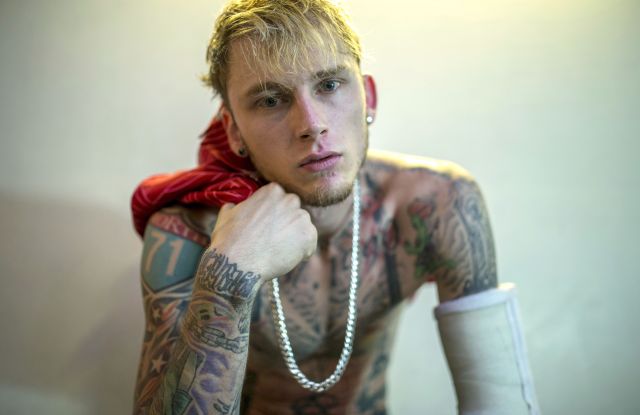 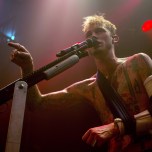 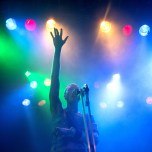 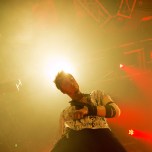 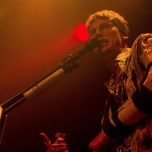 Colson Baker, better known as rapper Machine Gun Kelly, has expanded from musician to actor and producer with a few modeling stints in between. This year alone he appeared in three movies – “Viral,” “Nerve” and “The Land.” He’s also starring in the Showtime series “Roadies,” playing the role of Wesley “Wes” Mason. WWD sat down with the 26-year-old Cleveland native to talk music, fashion and movies.

WWD: You’ve starred in several movies. Have you always wanted to be an actor?
Machine Gun Kelly: I had grown up very middle class, middle of the map, in the steel belt of Cleveland. They don’t teach you to dream very much. So when you see people succeeding who look like you or come from the same place, it excites you and you relate to it. Ironically when I saw “Jackass” for the first time, I was in fifth or sixth grade and I thought, “Oh, this is a group of punk rock kids just like me and they picked up the camera themselves and done it all by themselves.” They were skaters and we were skaters. And ever since that moment — as funny as it sounds, because it’s “Jackass” — I fell in love with the idea of being behind and in front of the camera.

Working on “The Land” with Erykah Badu and Nas, that experience was more satisfying after the movie came out. During the filming of it, I was also on tour and I was also injured, I had a staph infection in my knee, and so I was close to having my leg chopped off. So when I made an appearance in that film, we had one day to shoot all my parts. But being executive producer, watching it come out and seeing the actual reaction to it, exceeded expectations. Being able to premiere it in the Rock and Roll Hall of Fame was really badass because I took my daughter to the Rock Hall when I was 20 or 21 years old before I got into music. I went there and forgot my wallet. This was the first time my daughter had ever been to the Rock Hall and right when we got to the ticket counter I was looking for my wallet and I realized that I didn’t bring it. I turned to my daughter and was going to have to tell her that we didn’t have any money to get in here. The lady looked at my kid and me and she let us go in and told us to enjoy our day. That was her first time in there, so  the next time she went back was when her dad’s movie was premiering, so it’s pretty cool.

I was really excited about “Nerve,” with Dave Franco and Emma Roberts. That was my movie highlight of my career so far, because it’s young and cutting edge. The fan reaction from it was higher than I’ve ever seen any movie project I’ve done.

WWD: How would you compare that to music?
MGK: I think with music, I’m a lyricist who talks about real life things. I’m very personal with my music and it takes a piece of your heart away every time you record that in the studio. So you only have so many pieces of your heart to give away. So I feel very burdened at this time because if you mess up in your music career and make a bad choice, it’s on you. If you say something people don’t like, it’s on you. Whereas in the acting world you get to play this character and anything you do on screen stays on screen and the burdens don’t travel over to your personal life. But my music is so personal that all of the burdens land on me.

WWD: What is it about fashion that interests you?
MGK: I think my goal for this year is to get a campaign by the end of the year. When I put that suit on for the Joshua Kane show, it was the first time I had ever realized the power of fashion. Again, coming out of the Midwest, a place where they don’t teach you outside of the norm — and fashion isn’t supposed to be normal — if it’s not normal they’re not educating you on it. So that moment I put that suit on was when I realized that fashion was not only expressive to that outer world but also to your inner world. Wearing that suit I had never felt so much confidence in my life. I never felt so comfortable in my own skin. So that’s when I started realizing what a piece of clothing can do. It’s so much deeper than just a piece of cloth or cotton. I have my eyes on a certain campaign that I want to be involved in by the end of the year. But I would like to do a high-end fashion collaboration because I feel it would be unexpected. I think it’s the confidence that you gain. Looking at other people and how they wear things. I think you can just see who someone really is if they’re wearing the right piece of clothing for them, without even really talking to them.

I didn’t come from a traditional background that’s educated in fashion so all of this stuff I’ve figured out recently and on my own. So I guess my responses are awkward and a little weird, but I guess it’s because it’s all new and fascinating to me, and I am discovering this whole new side of what clothes and accessories can do. I do attend a lot of fashion shows now and I really just want to see a Rick Owens show so bad, because he’s one of the designers whose store I’d spend hours in or if there were any new releases I’d be there the day of the release. I really enjoy his clothing and I really want to see his show. I had a really great experience recently at the John Varvatos show in New York and the Moschino show in L.A. was amazing — that actually blew my f–king mind.

I’ve also realized fashion is not just about the pieces you wear; it’s about how you feel in them. For example, these jeans I’m wearing are very regular jeans but they have the blood on them from the night when I messed my face up and broke my elbow. So there’s something about looking down and seeing that that makes me laugh.

WWD: What about modeling?
MGK: I see myself doing it. I see myself breaking every boundary that’s given to me. My brand and me seem to be a little misunderstood, but that’s a good thing because I’m not supposed to be easy to get. I don’t think the equation for electricity was easy — someone took the time and figured it out and we’re all grateful for it. So hopefully someone will take the time to figure out the complicated equation that is Machine Gun Kelly.

WWD: How would you describe your style on and off stage?
MGK: On stage it took a turn recently ever since Prince and [David] Bowie died. I realized that as an entertainer I feel we’re supposed to look like a superstar. That was something that they’d taught me and I didn’t realize for so long. If I see my favorite artist on stage, I want to see him looking like a superstar and the person who I paid my money to come and see, so when they come out I want to be wowed at what they look like in person. Recently, as of this year since Bowie and Prince passed, the clothing I wear on stage I try to be iconic every time.

WWD: Who is your style icon?
MGK: Some days it’s Kurt Cobain, other days it’s Bowie probably. I just don’t think I could pull off what Prince pulls off. But the L’Uomo Vogue shoot I did was a Bowie-inspired shoot and that was done before he died and was released the day he passed in America. It’s really trippy. If you look at the photos and factor in the fact that it was released on American stands the day he died, it was really weird when it happened.

WWD: Do you have a go-to look that you feel most comfortable in?
MGK: I do, I feel like Chucks or Doc Martins, ripped jeans. But that look pimped out a little bit. Something about the grunginess and being worn over and over again was attractive to me, but I think I have to find something else I like, too.

WWD: Can you tell us about upcoming projects?
MGK: I’m really excited about my third album because of the singles that we’ve lined up and them being more universally accepted based off of all the people I’ve played them for. I’ve never seemed to hit every pocket. Not that I’ve really tried to, but it naturally just seems that I’ve matured to a point where the audience I speak to is not just one demographic. I’m on the Showtime series called “Roadies” and I’d love to have it picked up for a second season. I don’t really know what, say, are my future projects right now just because I’m in the middle of building Frankenstein, because nobody will believe me until it happens — I’ve just got to wait until Frankenstein wakes up.

WWD: What’s your inspiration for this album?
MGK: I’ve listened to a lot of Radiohead. I want to do an album that feels like it added to the art culture somehow or in some way. So I’m going to do the visuals a little differently this time to how I’ve ever done them before. I’ve really been into strong, bold colors lately. Visually, album cover-wise, I really want to exercise my artistic background — something that transcends music.

WWD: Are you planning to incorporate art in the future?
MGK: It’s not like I’m Salvador Dalí. There are so many talented artists around the world. I’m in those circles and have those friends. I’m good at bringing those people together to create a vision, and so I’ll definitely do that. Performance art-wise, as the tours progress I want the same people who go to exhibitions for artists to go to my tour. I want to make my stage like a piece of art. I love surrealism. That’s why I like psychedelics so much. I think there’s a whole other world that we can’t see. I’m really interested in the Dalí piece that I have on my back. I am just so curious as to how his brain sees the world like that. Surrealism is what I wished my world looked like every minute every day.