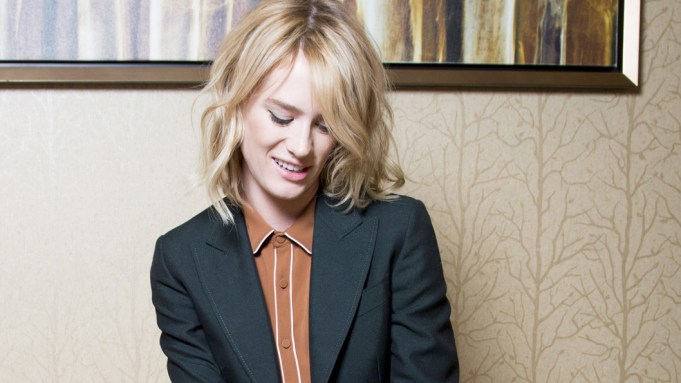 She was lounging at the Ritz-Carlton Hotel a few days after the premiere of Ridley Scott’s “The Martian” at the Toronto International Film Festival. Though she isn’t referencing her profession; the 28-year-old has been working steadily since her 2012 Sundance Film Festival debut in James Ponsoldt’s “Smashed,” with Mary Elizabeth Winstead and Aaron Paul.

The year after, she followed it up with another Sundance hit, Drake Doremus’ “Breathe In” opposite Felicity Jones, Guy Pearce and Amy Ryan. She’s also been raising her fashion profile, sitting front row at Louis Vuitton’s spring 2015 ready-to-wear show and just two weeks ago at Marc Jacobs’ extravaganza at the Ziegfeld Theater.

No, Davis says she’s not good at pretending to be a paper doll at the endless stream of appearances she has to do to promote her movies.

“I normally feel really self-conscious about getting dressed up,” she says. “I love fashion, but there’s something about presenting a different version of yourself and having your picture taken as that version that I’ve always been really uncomfortable with. In the past, it’s just felt dissociative and like, ‘Who is this person? I don’t even recognize you.’”

Despite her protests, Davis has been faking it like a pro recently, with some help from stylist Petra Flannery. She has to — “The Martian” is her biggest film to date and she’s been enlisted to help with its promotion. On Sunday, she was at the film’s screening as part of the New York Film Festival.

She manages to buck convention in other small ways. “This was my one act of rebellion,” she says, flashing yellow nails instead of the nude polish she had been advised to wear. “I always would rather look cool than beautiful. My dream is to find suits that I really like. But for the premiere here, there was this one-of-a-kind Prada dress that they let me wear. In that case, you’re like, ‘Oh. OK. I’ll wear this amazing sequin blue dream.’ There are those very special cases where I really would like to go full princess.”

When Davis was first cast in “The Martian,” opening nationwide on Friday, she was nervous about meeting Matt Damon, Jessica Chastain and Kristen Wiig.

“I panicked. I thought, ‘Oh God. It’s going to be full of famous people who are all going to know each other from celebrity galas or however famous people meet. No one is going to want to hang out with me,’ and then everyone was so lovely,” she says.

Next up, the actress stars in “Always Shine,” a indie thriller opposite “Masters of Sex” star Caitlin FitzGerald and, potentially, another season of AMC’s “Halt and Catch Fire.”

“We’re waiting to hear about season three. If that’s where it ends, then I think it ended on a really great note. If it goes forward, then I can’t wait to see what they do from here on out,” she says, shrugging again. “I’m just hustling.”