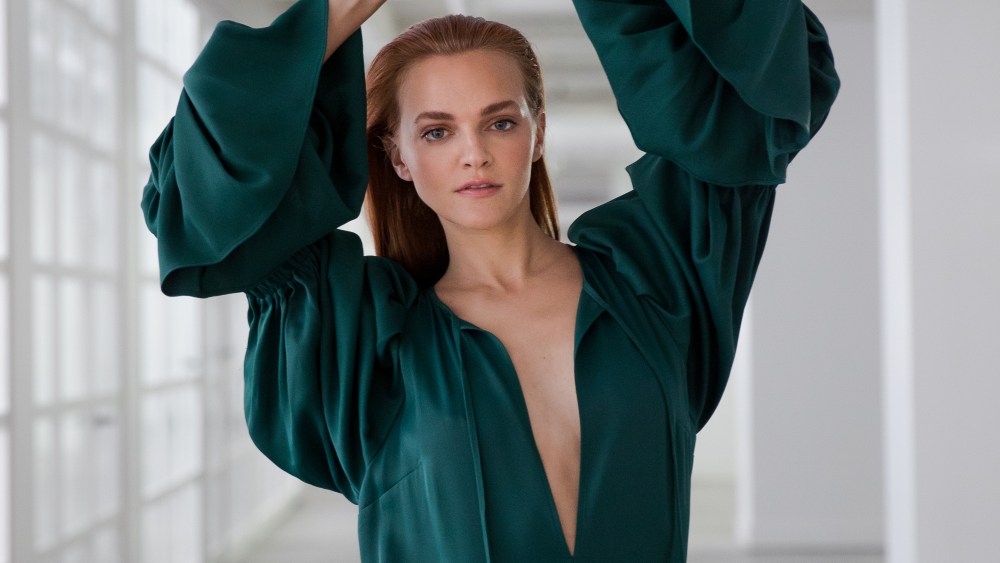 For Madeline Brewer, home is many things. It’s Los Angeles, where she currently lives; it’s her hometown of Pitman, N.J., and, like many actors, it’s the theater, where she started out before getting her break in television and film.

In mid-August, the red-haired actress was looking forward to going home to L.A. and sleeping in her own bed after three weeks of hopping between Airbnbs and hotels in New York. She was in the city — also a homecoming; she graduated from The American Musical and Dramatic Academy — taking meetings and auditioning, and attending the rooftop wedding of her “Orange Is the New Black” costar Emma Myles at Brooklyn Grange. But in the meantime, Brewer, barefoot and humming along to music playing in the background, is fully committed to the drama of a forest green Khaite gown draping her petite body for a photo shoot.

The actress, who got her start on the first season of “Orange Is the New Black” and landed a breakout supporting role on “The Handmaid’s Tale” (she wore Jacquemus and Monse, respectfully, to both show’s season premieres this summer), proved her leading cred as the star of last year’s well-received horror film — and sleeper hit — “Cam.” The Netflix film, produced by Blumhouse and written by a former cam girl, was lauded for its nuanced depiction of the sex work industry. Brewer, who has a supporting role in the J.Lo-led strip club film “Hustlers” out this month, credits her experience with “Cam” for shifting her perspective on the marginalized industry.

“Working on ‘Cam’ made me so much more cognizant about how people talk about sex work,” says Brewer, who earlier this spring filmed her role in the Lorene Scafaria-directed “Hustlers,” which is based on the real story of workers at a sex club swindling their deep-pocketed clients. The movie, set around the 2008 financial crisis, draws a parallel between the women’s line of work and the male-dominated financial industry.

“We’ve seen strippers so many times in movies and they’re always addicted to drugs or down on their luck — and none of these girls really have that. They’re real people with real problems, just trying to pay their rent and student loans and make a life for themselves,” Brewer adds. “The spotlight that we put on sex work in Hollywood is generally in a negative way. We don’t put the spotlight on these people as people; we put them as people who sell their bodies and their dignity and their innocence, and it’s just such an antiquated and honestly sexist way of looking at it.”

Brewer, who admits that she has become known for playing characters that are “crazy, offbeat, a little quirky,” also relished the chance to play a character that was, yes, still quirky, but rooted in comedy. “And improv — I’d never done improv, and [Scafaria] was just like, ‘Go for it, say whatever you want,'” she says.

“Hustlers” caps off a busy year for Brewer, which has also included the sci-fi thriller “Captive State” this spring and season three of “The Handmaid’s Tale,” which got renewed for another season this summer and recently revved up in the writers’ room.

“[Season three] has been a lot of setting up; we’re doing the necessary work to set up the final blow out. We’re really starting to see how the pieces come together to form the resistance,” she says, predicting the forthcoming action; actual production is still months away. “This was a lot of logistics getting to that point. That’s my personal opinion; I don’t know what they’re planning.”

She also recently finished reshoots for “Separation” with Brian Cox, which she filmed last December, and stars in the avant-garde movie “Now Is Everything” opposite Anthony Hopkins. Now Brewer is in recalibration mode, getting herself back to the mind-set needed to make her way back to one of her homes: the stage.

“I had a meeting with my former acting teacher and I was like, ‘I really want to work in the theater again, what do you think I should do?’ And he said read a play a day,” she says. “That’s how you get the mind for it and get it in your body and read it out loud and get back into that space.

“I ended up doing ‘Orange Is the New Black’ right after I graduated, which was amazing; it was the most rewarding experience, but I just sort of followed that path. And now I’m trying to make my way back to my original path. I want to have it all.”

And with that, out of the gown and back in her own clothes, she heads off to pick up some plays and get to work.